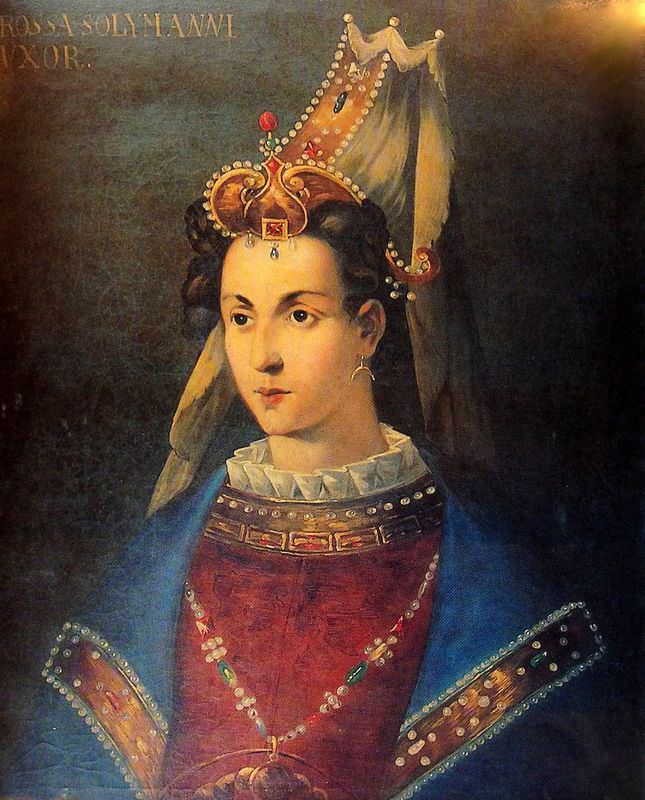 As one of the most famous and controversial historical figures in Ottoman history, Hürrem Sultan is usually depicted as an ambitious and power-hungry character that manipulated Sultan Süleyman. But is this really the truth?

Hürrem Sultan was born in Ruthenia in western Ukraine, which was under the rule of the Kingdom of Poland at the time. Thereafter, she was known as "Roxelane," which means "the Girl from Ruthenia." Although her birth name was Aleksandra Lisowska, the nickname "Roxelane" was so prominent that even the authors who wrote about her believed it was her real name.

Lisowska, whose father was an Orthodox priest, was taken prisoner by the Crimean cavalries at the age of 12 and sent to Topkapı Palace in Istanbul. After being educated and trained according to palace etiquette for many years, she was given the name "Hürrem," which means "the cheerful one" in Middle Persian, since she was a good-humored girl with a smiling face.

Behind every strong man, there is a strong woman

Ukrainian men and women are thought to be some of the world's most beautiful people. Was Hürrem beautiful, though? Due to the few surviving portraits of her and the likely embellished descriptions of her looks, even though they resemble each other, it is hard to say whether she was actually as beautiful as she was described. However, what made her famous was her intelligence and smiling face. Süleyman the Magnificent admired the character of the woman and he fell in love with her. Historians argue that the love he felt for Hürrem underlay all the successes that the sultan achieved during his lifetime.

Süleyman met Hürrem the same year that he succeeded to the throne, and their first son, Şehzade Mehmed, was born the following year. After Mehmed, Hürrem gave birth to Selim, Bayezid, Cihangir and then Mihrümah, their only daughter, who later married Rüstem Pasha. Mehmed was the favorite child of Süleyman, but he died at a very early age as a result of contracting the plague. In the memory of his son, Süleyman built the Şehzade Mosque in Istanbul.

The concubines who give birth to a şehzade (a sultan's son) were given the title "haseki" (mother of a prince), which means "has gelin" (the royal bride). For this reason, Hürrem was also called "Hürrem Haseki." Rumor has it that Hürrem was not willing to marry Süleyman when he first proposed. She said that she must be liberated first before the marriage ceremony, as concubines were seen as the property of their owner and could not marry anyone unless they were set free. When the sultan agreed to Hürrem's terms, an Ottoman sultan married a haseki for the first time in history. Until that time, all Ottoman şehzades left for the districts that they were appointed to as governors with their mothers. However, Hürrem was the first haseki who did not leave with her sons because the sultan wanted to keep her close.

The wife of the sultan

When Hafsa Valide, Süleyman's mother and the daughter of the Khan of Crimea died, and Mahidevran, the other wife of Süleyman, left the palace with her son Şehzade Mustafa, Hürrem became the sole female power in the palace. When the sultan left for campaigns, she oversaw palace order and informed the sultan of the latest news about Istanbul and the palace, as well as her discussions with the men of the state through her neat letters. She also worked as an intelligence officer for the sultan when he was away. As it is understood from her letters, her grammar was good and she wrote sentimental poems. In fact, it is a mistake to think of Hürrem, who had noble character traits, as a sneaky and seductive woman. Hürrem was an empress who successfully carried the title "The Wife of the Sultan of the World."

One day, Hürrem became very ill and dedicated herself to charitable works. She commissioned a domed mosque built in Istanbul's Haseki neighborhood along with a fountain, a poorhouse, a madrasah and a hospital. The hospital that was constructed by Hürrem, Haseki Hospital, still offers its services to sick people today and beatifies the memory of Hürrem.

Hürrem died in 1558 and was buried in the courtyard of the Süleymaniye Mosque. Süleyman had Mimar Sinan built a tomb, the interior of which was decorated with marvelous tiles. It is said that Süleyman was so sad that he was unable to enjoy life ever again after his wife passed away. When the sultan died, he was buried next to his wife.

Was Hürrem Sultan an instigator?

Süleyman had a son, Şehzade Mustafa, by his first wife, Mahidevran. Şehzade Mustafa resembled his grandfather Selim I because of his handsome face and bravery, and was expected to succeed Süleyman even though there was no formal succession system in the Ottoman Empire. No matter how good and successful a ruler is, people tend to get bored after many years. As Süleyman ruled for 46 years, people wanted to see Şehzade Mustafa take the throne instead of his elderly father. The close circle of Şehzade Mustafa encouraged him to seek power, and after some time, he began to talk at times as if he were the sultan. This made Süleyman suspicious about a possible plot against him, and when the sultan acquired evidence about the betrayal of his son, he executed Şehzade Mustafa. It is said that Hürrem, who wanted her children to sit on the throne after Süleyman, encouraged the Sultan to kill his own son. Some historians also blame Hürrem and her son-in-law Rüstem Pasha for encouraging Süleyman to kill his grand vizier, Pargalı İbrahim Pasha, and forgetting to mention what Şehzade and the grand vizier did to deserve this end.

Perhaps Hürrem was not sorry about these incidents and perhaps she was happy with the results. However, she was not to blame for the executions of Şehzade Mustafa and Pargalı İbrahim Pasha. Mustafa had proven that he was not worthy of the Ottoman throne with his reckless behavior. Although he was courageous, he lacked two qualities that were more important: patience and cautiousness. Moreover, neither Süleyman nor Hürrem hesitated to execute their son Şehzade Beyazid when he stirred up a riot. During those times, the Ottoman sultans did not hesitate to sacrifice even their loved ones for the unity of the empire and the people – one of the reasons why the Ottoman Empire stood for centuries.

A love letter from Hürrem Sultan to Süleyman the Magnificent

After I put my head on the ground and kiss the soil that your blessed feet step upon, my nation's sun and wealth my sultan, if you ask about me, your servant who has caught fire from the zeal of missing you, I am like the one whose liver (in this case, meaning heart) has been broiled; whose chest has been ruined; whose eyes are filled with tears, who cannot distinguish anymore between night and day; who has fallen into the sea of yearning; desperate, mad with your love; in a worse situation than Ferhat and Majnun, this passionate love of yours, your slave, is burning because I have been separated from you. Like a nightingale, whose sighs and cries for help do not cease, I am in such a state due to being away from you. I would pray to Allah to not afflict this pain even upon your enemies. My dearest sultan! As it has been one-and-a-half months since I last heard from you, Allah knows that I have been crying night and day waiting for you to come back home. While I was crying without knowing what to do, the one and only Allah allowed me to receive good news from you. Once I heard the news, Allah knows, I came to life once more since I had died while waiting for you. My dearest sultan! If you ask about Istanbul, the city still suffers from the plague; however, it is not like the previous one. God willing, it will go away as soon as you return to the city. Our ancestors said that the plague goes away once the trees shed their leaves in autumn. My dearest sultan! I am begging Allah for you to send me your blessed letters. Believe me when I say this: if I cannot hear a word from you for more than two weeks, the world collapses. There will be rumors about your well-being around the city. Please do not think that I want to hear from you just for my own sake.