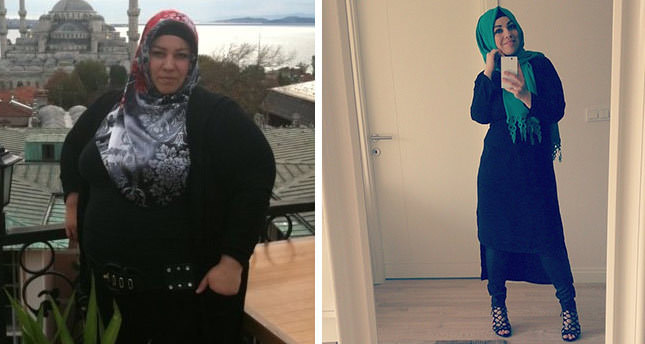 Walking in the shopping mall one day, I caught the reflection of a pretty woman in a store window and turned back to catch another glimpse of her, only to realize the reflection was my own

Knowing life only as an overweight person, after many diet failures, I had finally made my decision and was once and for all determined to stick with it. However, it took me over a year to set out on the journey.

The first thing I did was scour the Internet for "success stories" and added some more piles of health magazines to the others already at home. I can't really say I knew of any example in my social circle who had lost more than 20-30 kilograms. So I read, and then read some more. Seeing all the success stories gave me the hope that it was achievable, that I too could become "unfat" if I persevered.

Looking at the success stories, I noticed that the majority of those who had more than 40 kilograms to lose had chosen to have the lap-band surgery. This is a procedure that involves the fitting of an adjustable band around the stomach to restrict the amount of food one consumes, hence aiding weight loss through portion control.

I spoke to my family doctor, explained to him that I was sick and tired of being obese and asked him what he thought about me having the lap-band surgery. He not only approved, but also told me that at such a weight, it might be the only solution for me.

To cut a very long story short, I found the doctor who would be doing my procedure and had the surgery on Jan. 20, 2010. Dr. Andrew Smith at the Centre for Bariatric Surgery in Melbourne, Australia, who performed my surgery, told me that I shouldn't expect to get below 100 kilograms as I was a "very big girl."

I am in no way advocating weight loss surgery, the lap-band or anything else, and I know many who consider such a surgery as cheating or to politely put it, "the easy way out." But like many others who have had the same procedure would attest, whether they were successful or not, the journey that follows is lined with blood, sweat and tears. It certainly is no play in the park, but without a doubt, although it was no magical wand, the lap-band has been a very helpful tool in my personal journey.

The first eight months were very trying as I had barely lost any weight. I was disappointed in myself. I was visiting the doctor every one to two weeks for adjustments and tips. I was doing everything I was told, but still, I could not get my "miracle." Although the expected weight loss is 0.5 kilograms to 1 kilogram per week, I was only able to lose that amount or less per month. But regardless of the shame I felt and people asking me why they can't see any change in me, I hung in there, because, I thought, any loss is better than no loss and even no loss is better than any gain. I was well aware that it wasn't going to be a "quick fix;" it had taken me decades to reach my heaviest weight, so obviously it was going to be a long and difficult journey.

Although going to the gym regularly once I get into the habit was not foreign to me, I wasn't too enthusiastic about getting my butt on a treadmill at the beginning. Yet I knew that I wouldn't get too far without any physical activity. That was a given. So I started off with walking outdoors. Meal portions were reduced. I was eating small but frequent meals (this is what the lap-band helped me with). I started using the smaller dessert plates and spoons for my meals rather than the standard-sized ones. I also slowly but eventually started switching to lower calorie alternatives and even started cooking, because at least this way I would know roughly how many calories I would be consuming and what exactly is going into my body. Then to add to the physical activity I started parking my car at certain distances from my destination to walk the rest of the way. I opted to take the stairs instead of the lifts whenever possible. I went window-shopping at shopping malls for hours – this becomes utter pleasure once your body starts to change, because as you lose the weight, you will be tempted to go in and try on that dress you had your eye on for a while. On other days I would turn up the music and just go wild in the privacy of my home. Sometimes I would even move the furniture around and give the house a whole new look. It may not be an aerobic workout, but every little physical activity adds up.

There were many times that I hit a plateau and the number on the scales would not budge despite all my efforts. There were times I slacked off and overindulged in food – many, many times. But instead of letting the guilt take over me and instead of waiting until Monday to start the "diet" again, I would simply make up for it in the next meal or get up and do some sort of workout then and there. Because I was no longer dieting, I was making changes to the way I ate and lived.

It was well after the first year that I started seeing any noticeable change in my body and my movements. The joy I felt when I saw my toes in the shower for the first time without having to bend over is something I cannot possibly express in words. How can I explain the elation of grabbing a clothing item from the rack in a certain size, only to discover that it is a few sizes too big? And what about the surprise I got when I saw the extra room in my seat on a flight I boarded? Not having to face the embarrassment of requesting an extension belt from the flight attendant, because I am too fat to fit in the standard ones? The armrest remaining in place, because my thighs weren't big enough to push it up anymore? No longer having to sit on an awkward sideways slant so that my once tuck-shop arms – now small enough to fit well within the frame of my own seat – do not flow over giving discomfort to the person sitting beside me? How could I explain the smile on my face, exposing all 32 teeth, to the passenger in the next seat who was probably thinking I was nuts? But who cares, I was on cloud nine and even snapped a photograph of the belt as a memoir. And the problem with the meal tray always sort of lying on a slope over my roundness was no more.

By the end of the second year post-surgery I had lost about 60-70 kilograms. According to the standards imposed by society, I looked "normal." I blended in. But "I" didn't. My body had slimmed down, but my mind thought and still continues to think fat. Currently at about 65 kilograms, I feel fat. I feel anything but "normal."

Weight loss is one thing, but losing enough to make you look so different that friends and acquaintances who haven't seen you in a while fail to recognize you, comes with a price. Your body changes beyond recognition. Losing an excessive amount of weight means you are highly likely to have excess skin. When I first started on my journey, I did not consider what was going to happen to the skin once the fat "left it." Hence, even after all the hard work and effort, you wont necessarily get the "dream body" you imagined you would, leaving you disappointed and unsatisfied. So, unless you have the cash for constructive/plastic surgery – which is another journey on its own – you will be stuck with looking like a potato sack.

Now that I am no longer considered overweight, I have come to realize that life was just a tad more comfortable and easier back then.

If I couldn't get a job, I'd blame my weight.

If somebody didn't like me, I'd blame my weight.

If I was depressed and felt the world crumble around me, I'd blame my weight.

If people looked at me, I'd blame my weight.

Life is easier when fat: You get special attention – good or bad – because you are "different."

You stand out in a crowd.

People never forget you, because you are the "fat one."

You are usually known by name at diners and cafes you frequent – they even know what you are going to order.

You don't need to watch your weight; cheeky, I know, but you are overweight anyway, so a couple more kilograms won't hurt.

Things are different now that I no longer have the rolls of fat to hide behind.

To make matters worse, you come to realize that maintaining your weight is even harder than losing the weight; it becomes a lifelong commitment.

On a more serious note, in all honesty, for me, it has been worth it. Of course I slip up from time to time, I am only human, but I am no longer afraid of getting back on track, because I have done it, I can do it. I know I can. My only regret regarding this journey is not starting it earlier. My wardrobe no longer resembles that of a goth queen. I no longer avoid speaking up in public – although I still become very nervous and stutter. I no longer refrain from applying for jobs requiring visibility. I love shopping, I love dressing up and I no longer eat food for the sake of eating it. The change in the amount and type of foods I eat, when I eat, has been a significant part of my journey as making this change has been the most difficult of all, because old habits really do die hard. I continue to post photos of myself online, first to keep myself under check and liable, secondly, to show others who need the inspiration that it is possible; it is possible to lose a heap of weight and keep it off. My lap-band is no longer functional. I have not had it removed, but all the fluid in the band that restricted the amount of food I consumed was taken out. So, I have been on my own, without any help from the band for almost three years now.

Finally, although on the surface of it all, the weight loss may seem to be about vanity, it was and still is about finding the true me, not being afraid to discover my capabilities and most important of all, it is about claiming my life back. Everything else that comes with it is part of the bonus.

And next on the bucket list is bungee jumping.