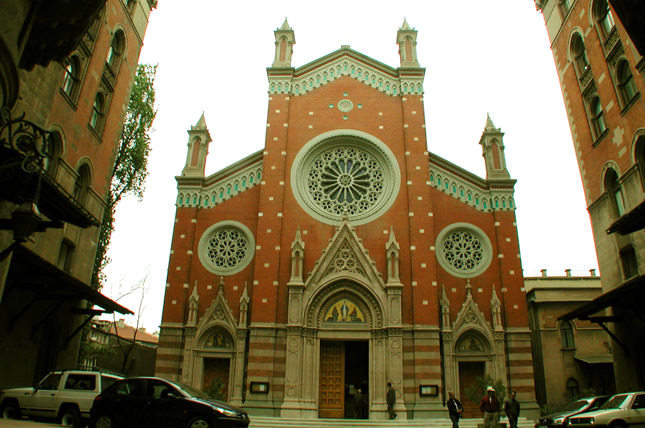 Istanbul is a beautiful city drenched in history and considered a capital of culture and art. Alongside the magnificent mosques, there is a breathtaking array of churches that should be added to the list

With Christianity in Istanbul dating back to the fourth century, the Christian population of Turkey is estimated at more than 160,000. These include Roman Catholics of varying ethnicities, ethnic Assyrians, Greek Orthodox and a small number of Bulgarians, Georgians and Protestants of various background. Here is a list of some of the most-visited and widely-known churches in Istanbul that are worth a visit.

Located on the famous İstiklal Avenue in Beyoğlu, St. Anthony of Padua Church, alternatively known as Sant'Antonio di Padova Church, is an Italian Neo-Gothic-style church built between 1906 and 1912. Being the largest and most important of the Roman Catholic churches in Istanbul, this church has the largest community attending its masses. With its red brick exterior and phenomenal interior design, St. Anthony of Padua is sure to take your breath away. The original St. Anthony of Padua Church was built in 1725 by the local Italian community of Istanbul but was later demolished and replaced with the current building, which was constructed in the same place. The building was designed by the Levantine architect Giulio Mongeri, who is also known for designing Maçka Palas, a hotel that also houses stores and cafes such as Gucci and Armani Cafe in Nişantaşı. Mongeri was also the architect of the Neo-Byzantine-style Karaköy Palas bank building in Karaköy.

St. Anthony of Padua Catholic Church is considered a minor basilica and is run by Italian priests. Masses are held in a few languages such as Italian, Polish, English and Turkish. Pope John XXIII preached in St. Anthony of Padua Church for ten years when he was the Vatican's ambassador to Turkey before being elected pope. He is famous in Turkey with the nickname "The Turkish Pope" because of his fluent Turkish and his oft-expressed love for Turkey and Istanbul in particular.

St. Eirene, otherwise known as Hagia Irene, meaning Holy Peace in English and Aya Irini in Turkish, is a former Eastern Orthodox Church located in the courtyard of Topkapı Palace. This fascinating church was the first church built in Constantinople. The Roman Emperor Constantine I commissioned the first Hagia Irene Church in the fourth century. Before Hagia Sophia was completed in 360, it served as a church of the Patriarchate. The church was burned down during the Nika revolt in 532, and in 548 Emperor Justinian I had the church restored. The church was later enlarged during the 11th and 12th centuries. Hagia Irene has the typical form of a Roman basilica, consisting of a nave (the main body of the church extending from the entrance to the transepts) and two aisles, divided by columns and pillars. The massive dome is 15 meters wide and 35 meters high and has 20 windows.

Only after 1453, when Mehmed II conquered Constantinople, was the church enclosed inside the walls of Topkapi Palace. The Janissaries used the church as an armory and a warehouse for war booty. During the reign of Sultan Ahmet III, it was converted into a weapons museum. It was used as the Military Museum from 1908 until 1978 when it was turned over to the Turkish Ministry of Culture. Today, Hagia Irene (St. Eirene) serves mainly as a concert hall due to its extraordinary acoustic characteristics and remarkable atmosphere. For many years, Hagia Irene was only accessible during events or by special permission from the Hagia Sophia Museum Administration Staff, but in January 2014, the museum decided to open to the public on a daily basis. The museum is now open to visitors every day of the week except Tuesday.

Church of St. George (Aya Yorgi) on the Golden Horn

The Church of St. George is the main Greek Orthodox cathedral still in use in Istanbul today. Dating back to 1836, this church is part of the Greek Patriarchate, a compound of buildings nestled behind the historic sea walls fronting the Golden Horn. Inside are artifacts, including Byzantine mosaics, religious relics and a wood and inlay patriarchal throne. The most eye-catching feature is a carved wooden iconostasis (screen of icons), that was restored and lavishly gilded in 1994.The patriarchal throne is in the middle of the nave. Made of walnut and ivory, mother of pearl and colored wood, it is thought to date to the last years of Byzantium. Other treasures include the 11th-century mosaic icon that is on the south wall to the right of the iconostasis. This shows the Virgin Mary holding and pointing to the Christ Child, and was originally created for the Byzantine church of Pammakaristos, which is now the Fethiye Museum. The relatively small church, dedicated to the Christian martyr Saint George, is the site of numerous important services. Behind the church are the offices of the Patriarchate and the Patriarchate Library.

Since the fall of the Ottomans and the rise of modern Turkish nationalism, most of the Greek Orthodox population of Istanbul has emigrated, leaving the Patriarch empty and without support, at least locally. Today, the Church of St. George serves mainly as a symbolic center of the Ecumenical Patriarchate, which is supported financially by donations from the Orthodox communities in other countries. The Church of St. George (Aya Yorgi) is open to the public from 8:30 a.m. to 4 p.m.

The Bulgarian St. Stephen Church, also known as the Bulgarian Iron Church because of its famous cast iron exterior, belongs to the Bulgarian minority in Istanbul. Completed in 1898, the richly ornamented church is a three-domed cross-shaped basilica. The altar faces the Golden Horn, and six bells that were cast in Yaroslavl, rise above the narthex. The Bulgarian St. Stephen Church was initially a small wooden church that was built on the shore of the Golden Horn between Balat and Fener squares. After the original wooden structure suffered in a fire, the larger current building was constructed in its place. An iron frame was preferred to reinforce the building due to the weak ground conditions. The architect of this fine building was Hovsep Aznavur, an Armenian of Istanbul origin. The prefabricated parts of the church, weighing 500 tons, were produced in Vienna in 1893-1896, and transported to Istanbul by ship via the Black Sea. With a combination of Neo-Gothic and Neo-Baroque influences, the pieces of the church were joined together with nuts, bolts, rivets and welding.

The breathtaking church is still used for services by Istanbul's small, dwindling community of Bulgarian Orthodox residents. In September 2013, the Iron Church marked its 115th Anniversary. The anniversary coincided with the celebration of the Nativity of Mary as well.

Established over 500 years ago, the Armenian Patriarchate still wields considerable authority today. The head of one of the largest Christian groups in Turkey, it is housed in the Church of Surp Asdvadzadzin in Kumkapı. It consists of a three-storied structure in the immediate vicinity of the cathedral and two churches. In the 1950s, the Soorp Khatch Seminary was established for the preparation of the clergy, but for various reasons it was converted into a regular school. At present, candidates for the priesthood receive tutorial education on the premises of the patriarchate. Today, the Armenian patriarchate of Constantinople extends its jurisdiction mainly over Istanbul and its suburbs where Armenians still live and constitute the largest Christian minority in Turkey. Outside of Istanbul, the patriarchate only has a small number of churches in Turkey and one parish in Crete.