The religious diversity of Istanbul as illustrated by its cemeteries 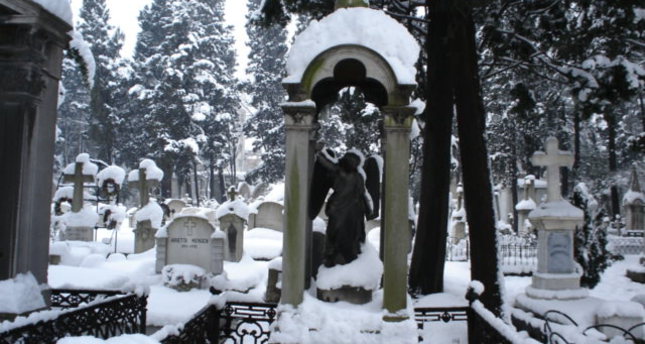 The crowded city of Istanbul has managed to make room for exactly 320 cemeteries, 255 of which are Muslim cemeteries and 65 belong to non-Muslim religions. In a city where cultural and religious diversity is seen on every corner it is no surprise that the city houses graveyards for Greeks, Armenians, and Gregorians belonging to Orthodox Christianity, Catholicism, Syriac Christianity and Judaism

Throughout the centuries Turkey has been called home to many different civilizations as well as a variety of diverse cultures and can be considered the melting pot of Europe. There are over 70 million people living in Turkey and about 160 thousand of them are non-muslims, most of them living in the city of Istanbul. The metropolitan city has many muslim cemeteries and just as many non-muslim cemeteries as well.

The Feriköy Protestant Cemetery, as can be concluded from it's name, is a protestant graveyard located in Feriköy, Şişli. Originally called Evangelicorum Commune Coemeterium, this final resting place for protestant christians was established in 1859, just 2 years after it was granted to protestant powers of the time by the Ottoman government. The cemetery itself contains many different types of monuments and memorials dating all the way back to the 17th century as well as many modern ones. The graveyard also has artifacts and monuments pertaining to the old Frankish burial ground Grand Champs des Morts "Great Field of the Dead which was the official burial site before it was declared no longer suitable by the Ottoman government. Ernest Mamboury, a Swiss scholar who is known for his works on Byzantine art and architecture in Istanbul is buried in this cemetery along with Paul Lange who was the last court musician of the Ottoman Court and an renowned choir conductor in Istanbul.

The largest Roman Catholic cemetery in Istanbul is the Pengaltı Roman Catholic Cemetery also known as Feriköy Latin Catholic Cemetery. It lies just across the street from Feriköy Protestant Cemetery only to be separated by a street that cuts clear across. Much like its neighboring cemetery Pengaltı Cemetery was created by and order from the Sultan of the era Sultan Abdulmecid I when the Grand Champs des Morts was declared insufficient to be the official burial ground of christians. Because of this many of the bodies buried there were exhumed and transferred to their current location at the Pengaltı Roman Catholic Cemetery. The graveyard contains monuments of Greek Catholics, Armenian Catholics, Syrian, Chaldean and Melkite communities within its boundaries. The most famous of all being the mausoleums of the great Levantine families located on the western part of the cemetery.

Again in the same area of Istanbul is another non-muslim cemetery located just across the Cevahair Mall. Şişli Greek Orthodox Cemetery also known as Şişli Eastern Orthodox Cemetery is the resting place for Orthodox Christians living in Istanbul. The founding of the enormous cemetery, which occupies over 52 acres, dates all the way back to 1859. About 85 thousand people have been interred at the site since its establishment consisting mostly of Greeks. There are however graves of other Orthodox nationalities such as Russians, Serbians, Bulgarians and Arabians. Georgios Zariphis, a prominent Greet Ottoman banker and financier of the 17th century was laid to rest in 1884 at this cemetery.

There are a handful of Jewish cemeteries scattered around Istanbul some in remote some in populated areas. Hasköy Jewish Cemetery otherwise known as Beyoğlu Jewish Cemetery is a graveyard located in Istanbul's best known area, Beyoğlu. This cemetery was established in 1583 and and is mostly occupied with Shepardic graves with horizontal headstones as in the Shephardic tradition. This cemetery is home to the Kamondo Mausoleum which was established for Abraham Kamondo who was the leader of the Jewish community in Istanbul during the 19th century. Aside from this Abraham was also one of the founders of the municipality who made great contributions to the Jewish community in Istanbul. Ulus Ashkenazi Jewish Cememtery is as the game can tell us the burial ground of the Ashkenazi Jewish community in Istanbul. This cemetery was established towards the beggining of the 18th century in Arnavutköy. The burial service for the cemetery is provided on site by the Neve Shalom Synagogue Foundation which is also responsible for the maintenance of the graveyard. The victims of the 1986 Neve Shalom Synagogue bombing are interred at this cemetery along with many Turkish-Jews who once resided in Istanbul.

As we move on to Muslim cemeteries in Istanbul, Eyüp Cemetery comes to mind. One of the most oldest and largest Muslim cemeteries in Istanbul this burial ground is also the most historically rich as well. It holds the graves of Ottoman sultans, grand viziers, court members, religious authorities and commanders as well as poets, artists, and scientists. Sultan Mehmet V, Ahmet Haşim a poet, Şeker Ahmet Pasha a painter, solider and government official, Hüseyin Hilmi Işık and Islamic scholar and Necip Fazıl Kısakürek a poet, novelist and philosopher. The burial site was popular during the Ottoman era because people wanted to be buried near Abu Ayyub al- Ansari, a friend of Prophet Muhammad, who had died during the raid against the Byzantine Empire. He is also the man who gave the area its name, Eyüp. In 1453 a tomb was built over his grave and shortly after a mosque was constructed in his honor, Eyüp Sultan Mosque.

On a hill right beside the Eyüp Cemetery this is a separate little burial ground which many don't know about. This detached cemetery is called the "Executioners Cemetery" where the executioners during the Ottoman Era are buried. They have their own burial site because they were not allowed to be buried in public cemeteries and they were laid to rest in only two graveyards in Istanbul and only secretly at night. Their headstones were left blank with out any name or date for the purpose of avoiding any retaliation of the families of the executed people.

Karacaahmet Cemetery, clocking in at 700 years old is the oldest and biggest cemetery in Turkey and even takes a place among the biggest cemeteries in the world. 750 acres of burial sites, headstones and Cypress trees make up this cemetery which is located on the Asian side of Istanbul in Üsküdar. The cemetery is so big that it has 7 doors for entrance located on all sides. Each door has a specific name, they are Seyyid Ahmed (İraniler) Kapısı, Namazgâh Kapısı, Harmanlık Kapısı, Şehitler Kapısı, Körkapı, Yanık Ömer Kapısı, Fıstıklı Kapısıdır. Karaca Ahmet is the name of the son of a Turkomen Bey, Süleyman Horosani and was established some time in the mid-14th century. Inside the cemetery is the shrine of Karaca Ahmet Sultan, who is the saint of the Alevis. On any given day you can come across people praying at his shrine. Since its foundation about 1 million people have been interred in the graveyard. It is believed that it was first used as a burial site for the soldiers who died when Istanbul was raided by Arabs but has since been the final resting place for many more people. Even though it is commonly known as a Muslim cemetery Karacaahmet Cemetery is actually composed of 12 different parcels, each dedicated to a different religions.