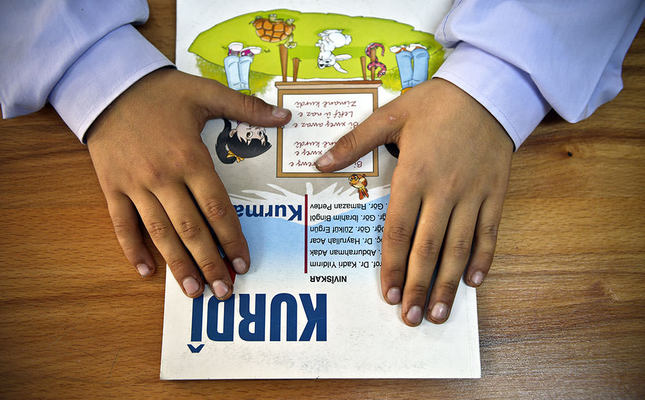 The Turkish government took its first major step in the reconciliation process with the Kurdish community in 2002. Since then, interest in the Kurdish language has increased, attracting not only Kurds, but also Turks and foreigners

In the past, hearing a Turkish leader speaking the Kurdish language would have been unthinkable.This week, Prime Minister Ahmet Davutoglu addressed a crowd of thousands in the southeastern province of Diyarbakır – Turkey's Kurdish heartland – and made headlines by not only speaking the language but by claiming he wanted to learn more."I would like to learn our beautiful Kurdish language as much as our beautiful Turkish language, if I can find time," said the prime minister, who added that he bought a grammar book for himself to study.

He is just one of thousands of people in Turkey taking a renewed interest in Kurdish-an issue which has proved sensitive and divisive in the past.

The Anadolu Agency has met teachers and students of Kurdish in Turkey's major cities.

"Interest in learning Kurdish is increasing every day in Turkey," said one Kurdish course manager. "This interest is not only shown by Kurds, who do not speak or read their own tongue, but also by Turks and foreigners."

Some learn Kurdish in order to be able to understand their friends and need the tongue for business reasons. Others learn because they want to know their culture and history better. All of these reasons bring hundreds of people together in the same place in Kurdish classes.

Kurdish belongs to a northwestern Iranian branch of the Indo-European family. It is accepted as the fourth most spoken language in the Middle East, after Arabic, Persian and Turkish. Sami Tan, president of the Kurdish Institute of Istanbul says: "There were around 150 attendees per year when the classes started regularly [in 2005], now it has exceeded 1,000."

Courses for the language are not very common across the country. However, the numbers are increasing. "The solution process has had an effect on this increase but the real reason is that Kurds believe their culture has been assimilated in recent years and want to protect it," Tan notes. The government launched the "solution process" in 2012 with the aim of securing an end to the decades-long conflict with the outlawed PKK, which claimed the lives of more than 40,000 people in Turkey.

The major first step in the detente with Kurdish began with Turkey's European Union membership bid. In 2002, the government legalized broadcasting in local languages other than official national language, Turkish.

In the same year, the government allowed private education companies to offer local-languages courses. In 2004, public channels began broadcasting programs in local languages for 30 minutes during a day.

In 2009, the government opened a 24-hour public channel broadcasting exclusively in Kurdish. Restrictions on producing election literature in Kurdish were also dropped. The opening of state-owned TV station, TRT's Kurdish channel and Anadolu Agency's Kurdish department have also promoted wider acceptance of the language in the country.

In the same year, Kurdish became an elective course at some universities. Istanbul Bilgi University was one of the first in the city offering courses. Private universities like Sabancı, Koc, Bilkent and Kadir Has followed suit.

In 2011, Mardin Artuklu, Muş Alparslan and Bingol state universities in eastern Turkey, opened Kurdish language and literature departments. Cemal Atilla, manager of Istanbul-based Geoaktif International Culture and Activism Center – where minority languages like Kurdish, Armenian and Ottoman Turkish are taught – pointed to the rise of Turks who want to learn Kurdish in recent years. "The majority of people in classes were Kurds who grew up in Istanbul and do not speak their mother tongue or wanted to improve it. Now, there are many Turks who want to learn Kurdish," Atilla states, "Half of a class consists of Kurds, the other is Turks."

Kurdish language is divided into five dialects – Kurmanji, Sorani, Gorani, Lorani and Zazaki – although there are some disputes over some of these dialects.

In Turkey, two dialects of Kurmanji and Zazaki are spoken. Around 80 percent of the population in the country speaks in Kurmanji, while the others speak in Zazaki.

Oguz Daver, 53, a doctor in Istanbul, has been learning the language for two years at Geoaktif. His reason is to be able to understand his Kurdish friends better and to learn Kurdish culture."I've worked in southeastern region of Turkey. I wish I knew Kurdish there and spoke to them," says Daver, who also speaks English and French. "Not to be able to understand a language spoken around me irritates me," he adds.

In Turkey, 18 percent of the 80-million-strong population is Kurds, various estimates suggest. They are concentrated largely in the southeastern cities of the country. Emrah Özbay, 38, who is doing finance business in Istanbul, started learning his mother tongue one year ago at the same center. Özbay, who is from Diyarbakır province, only understood the basics before attending the course; he can now can write and read Kurdish. "Standing idle by this language and culture was disturbing me. When I learn it, I feel myself much more comfortable," he says.

Bilge Soner, 35, a sales consultant in the city, has not taken any courses yet but wants to improve. "I can speak Kurdish but cannot write and read it. It is really upsetting not to be able to read letters written by my grandfather and grandmother," Soner says. "There are also foreigners – from the U.S., France, the Netherlands – in almost every class, as they need the language for business reasons," course Manager Cemal says.

The Kurdish official also claimed that academics, journalists and those who want to do translation work have recently shown a great interest in the courses.

The president of the Kurdish Institute of Istanbul finds this rise very affirmative. "If we learn each other's languages, it will unite societies and iron out divisions and pre-judgments," he says.