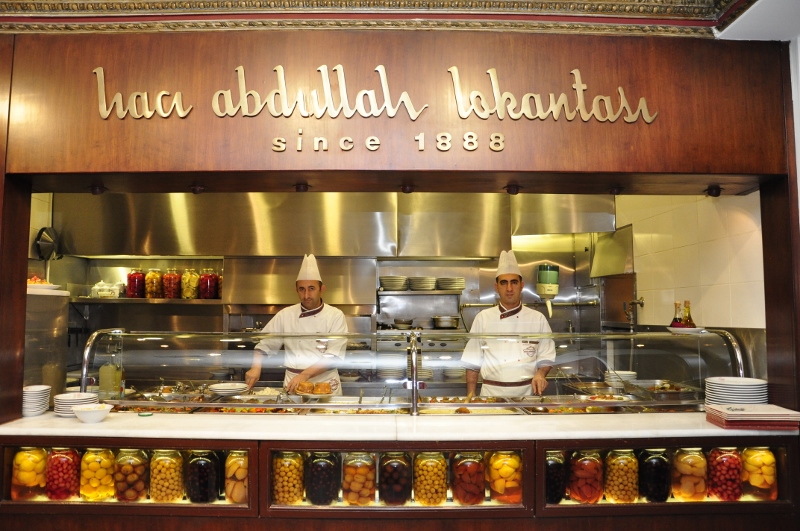 Located in Karaköy, close to Istanbul’s historic peninsula, the 127-year-old Hacı Abdullah restaurant is reminiscent of an Ottoman palace with its unique ambiance and 500 delicious dishes

The story of the 127-year-old Hacı Abdullah restaurant began in the Ottoman era in 1888 when a restaurant called Abdullah Efendi opened during the final period of the Ottoman Empire in Karaköy Quay, which saw Sultan Abdülhamid II personally give the restaurant its trading license. Traditional companies in Turkey either pass from father to son or become acquired by another establishment; however, Hacı Abdullah suffered no such fate. The tradition of Hacı Abdullah is evidenced by the Ahi Community, which is being lost in modern business culture – meaning the restaurant's ownership has transferred from master to apprentice. The current owners of the restaurant have been colleagues for more than 40 years. Abdullah Korun, the third generation entrepreneur of the restaurant, is one of the current owners who began as a waiter in 1967. After his master and boss, Hacı Salih, died in 1982, Korun and his partners took over the restaurant.

If you want to taste traditional Ottoman Turkish cuisine, Hacı Abdullah should be your first stop in Istanbul. When you arrive at the restaurant, multilingual waiters warmly welcome you. The ambience makes you feel like you have gone back 100 years in time to an Ottoman palace. You will also see different types of pickles and compote in large jars on your right. They are prepared when a particular fruit or vegetable is in season and are served throughout the year. The cuisine offers more than 500 different meals and dishes and they present at least 150 meals every day. Mostly homemade dishes are cooked or prepared at this restaurant, with vegetarian meals also available. I would like to suggest artichoke as a starter and lamb shank stew with eggplant or hünkar beğendili kebab (kebab over pureed eggplant) as a main dish. You should drink fresh pomegranate juice, which is especially very good in the winter time, and end your meal by tasting Aşure (Noah's pudding), topping it off with a "fincan" of Turkish coffee. After your meal, enjoy İstiklal Avenue – a street that is alive at all hours of the day – and take a walk between Tünel and Taksim Square.

Since the restaurant opened, many local and foreign presidents and prime ministers as well as other notable individuals have sampled the tasty foods here, such as President Recep Tayyip Erdoğan, Prime Minister Ahmet Davutoğlu, Yusuf Islam (formerly known as Cat Stevens), Garry Kasparov and Claudia Roth, who each had much to say about the cuisine. For instance, while he was the Mayor of Istanbul in 1997, Erdoğan said, "We are enjoying the taste of authentic Turkish cuisine on the day that Hacı Abdullah Restaurant opens once again after being restored." Islam said, "Thank you for a wonderful traditional meal and service. May this honorable institution continue to give strength and nourishment to the people of Turkey and the noble history of Islam in this city. I hope to return one day, God willing." Kasparov, a former chess world champion, once said, "Thank you for an opportunity to taste authentic Turkish food. It was a great experience! Your famous place is another good reason to visit Istanbul again." Orhan Pamuk, a famous Turkish novelist and Noble Prize winner, said, "Traditional foods make me remember my grandmother's meals. It is a second grandmother's home for me. Sometimes we have some guests who don't know any foreign languages, so they choose the meals from the glass case and afterwards, we know they are happy because they give us a thumbs-up."

For Daily Sabah readers, we have a recipe straight from Abdullah Korun for one of the most popular dishes at the restaurant: Hünkar beğendili kebab