Islamophobia on the rise in Europe: Will the cost be too high for the UK? 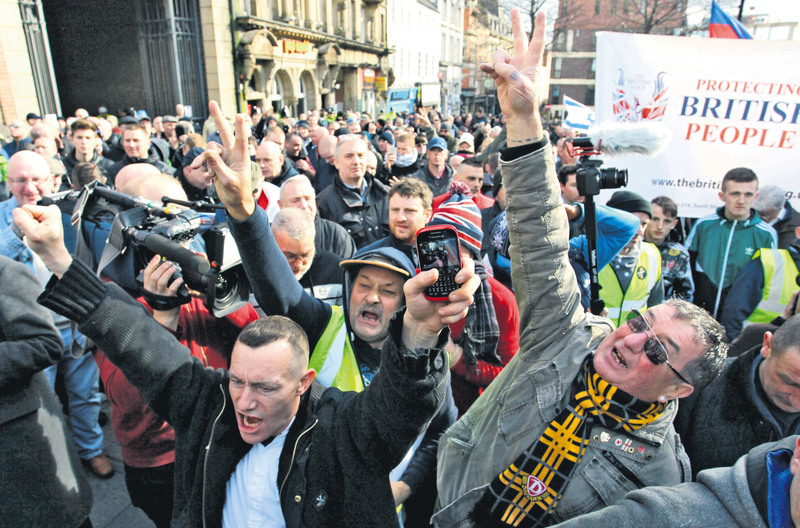 Investors throughout the Middle East are becoming cautious about investing in the U.K. in light of increasing Islamophobia in the country. Partly catalyzed by the rise of ISIS and recent events in Paris, Islamophobia is leading to a serious crisis in confidence. The rise of far-right political movements in mainstream British politics along with the growing anti-immigration narrative are not helping to ease these fears either

There is a worrying trend, which has been increasing in recent weeks. It seems that Muslims are now considered to be legitimate targets for smear campaigns and vitriolic fear mongering; indeed, there has been a dramatic rise in such cases and a particular focusing on high profile and foreign Muslims. A loose network of Islamophobes and Islamophobic journalists in the British press appear to be spreading fear against Muslims with complete impunity. Such a development has led to growing concern among Muslims around the world. Recently, journalists such as Andrew Gilligan and Nick Cohen have effectively taken up a campaign to portray high profile or high net-worth Muslims as being a threat to the UK and Europe.

Two weeks ago the Telegraph published an article by Gilligan entitled "Islamic Radicals at the Heart of Whitehall." The title is designed to strike terror into the hearts of the readers of right-wing papers. After Charlie Hebdo and all the horrors inflicted on people by ISIS, this was the nightmare that the British had been dreading. Radical Muslims had infiltrated the very heart of British government.

The message in the Telegraph is clear. While the nation's attention was elsewhere, Baroness Warsi, who is not only a senior Conservative politician, but also an outspoken Muslim, had filled parliamentary working groups with radical Muslims to steer the agenda, what the Telegraph calls "entryism." However, when the facts of the case are examined, this slanted and poorly documented piece of journalism can be seen to be little more than an ugly smear campaign waged by the Telegraph.

The Telegraph has been criticized lately for its advertising policies, being accused of improperly or insufficiently reporting stories that might harm major advertisers. This has most recently appeared with reporting on HSBC's tax evasion. However, perhaps even more sinister, HSBC has also been on the agenda due to their policy of cancelling accounts belonging to leading Muslim individuals and charities. The accounts were cancelled without warning or explanation, leaving the account holders in a state of financial limbo. Such events were widely covered in all the main papers, but were significantly under-reported in the Telegraph.

As a result, this story about Baroness Warsi and other prominent Muslims once again raises many questions about the intents and editorial policies of the Telegraph.

Baroness Warsi was welcomed in Turkey this winter; she was hailed as a heroine who stood up for her principles rather than maintain an influential position in the government. Last August Baroness Warsi resigned from her post as Secretary of State for Foreign and Commonwealth Affairs, stating that she found the government's position on the Israel-Gaza conflict "morally indefensible."

However, Warsi does not just speak up for Muslims. In Washington D.C. in 2013 Baroness Warsi stated: "There are parts of the world today where to be a Christian is to put your life in danger. From continent to continent, Christians are facing discrimination, ostracism, torture, even murder, simply for the faith they follow."

Just months after resigning over the government's policy in the Israeli-Gaza conflict, Warsi is being accused of bringing radical Muslims into the government. These so-called "radicals" are the very people she brought in to help the discussion about Islamophobia and to increase inter-cultural dialogue. The people Warsi appointed to a "cross-government working group on anti-Muslim hatred" are being accused by Gilligan of being "radicals" or "former radicals" or even "their allies." What is meant by radicals or how one defines a former radical is not clarified.

One of the people being referred to as a "radical" is Muddassar Ahmed, who Gilligan states was "a former senior advisor to the Muslim Public Affairs Committee (MPAC), an extremist and anti-Semitic militant body."

What the Telegraph fails to report here is that Ahmed has publicly condemned MPAC with whom he was involved for a short time many years ago (and yet he does not get the accolade of being a "semi-radical" but is rather a full-blown "radical"). In Ahmed's own words in an article in the Huffington Post (revealingly entitled "A British Muslim Journey from Protest to Engagement"), Ahmed states: "MPAC is politically orientated and unapologetically staunch in its vocal criticism of the government. ... Attracted by the organizations conviction and commitment, as well as playing on my youthful idealism and a desire to bring about change … I became involved with the organization. At the time, I felt the best way to get my voice heard was through strong, old-fashioned activism, but I left after a year due to differences on vision, strategy and tactics. A decade later, my perspectives have evolved and certainly MPAC has moved on with its agenda and focus, one that diverges from my own thinking."

Ahmed is accused of trying to force through planning permission for the so-called Mega Mosque in London, which Gilligan implies will be a focal point for radicalism. The Mega Mosque has, thanks to Ahmed's personal intervention, put aside a large space for women and again acting on Ahmed's advice, will be open to Muslims and non-Muslims alike. The plans for the mosque read more like a large community project in an underprivileged area of London that will help communities meet and converse, as well as creating a public space for women.

In May and June of 2012 Ahmed wrote articles for the Telegraph. Curiouser and curiouser. Does that mean that the Telegraph has radical tendencies? Rather difficult to imagine.

The article, which appeared in the Telegraph at a time when the wounds from the tragedies of Charlie Hebdo and Chapel Hill are still fresh, appears to be nothing but another attempt by some parts of the British media to fan the flames of Islamophobia. Islamophobia is on the rise throughout Europe, but the British press should think twice before jumping on the bandwagon. There could be serious repercussions. Britain has long been a major hub in international trade and business, attracting investment from all over the world. The London-based economy has had a long tradition of welcoming business and investment. But Islamophobia, encouraged by the media, is something that has caused Muslim investors from all over the world to hesitate and reconsider their position. It is not so much the reports of incidents of Islamophobia on the streets that are of concern; rather, when institutions like the press become involved in spreading Islamophobic sentiments and when responsible journalism is used to target leading Muslim figures, many people start to reconsider how safe a location London may be for long-term investments. The accompanying rise in the popularity of UKIP, the far right, which brings with it a growing anti-immigration narrative, only helps to increase worries.

A number of experts, observers and politicians have been concerned by this trend, warning that the targeting and smearing of high profile Muslims by the press has escalated; this is a matter that should concern the British government. When the right-wing press targets former cabinet ministers, activists, business people or just foreigners solely because they are Muslim and when they feed fears about the threat posed by Islam and Muslims worries about investing in London grow. The question being asked is can such an environment be one that will be conducive to Muslim investments. Combined with the HSBC scandal of cancelling the accounts of prominent Muslim individuals and organizations, Muslim business people and investors may soon start to look for more friendly shores.

One does not have to look far to see the results of right-wing anti-Islamic tirades on business. Geert Wilders, the Islamophobic Dutch politician, mocked the Saudi flag, insulting not only Islam and Muslims, but also Prophet Muhammad. This brought business deals between Saudi Arabia and the Dutch into question, and the Saudis announced that they would no longer cooperate or work with Dutch companies. Not only was the Council of Saudi Chambers ordered not to work with Dutch companies, the government also called for reductions in the number of visas issued to Dutch businessmen. These measures threatened approximately $8 billion worth of Dutch business interests in Saudi Arabia and caused panic in the Dutch government.

Similar negative reactions from Muslim investors in Britain can already be seen. A representative from a Pakistani business delegation stated that the rise in institutional and mainstream Islamophobia in the UK makes it difficult to consider London as a favorable business destination. Investors from Malaysia also consider the UK a no-go zone for investment opportunities due to this rise in Islamophobia.

The impact of the Telegraph's recent "entryism" accusations, along with other Islamophobic events that can be seen to be harboring Islamophobic intent – both in the media and institutions, as well as in mainstream society – has also led Turkish investors to reassess the situation. One Turkish businessman, who runs a multimillion investment company, stated that he would not invest in the UK because the Islamophobic hatred was "open" and being perpetrated by the mainstream British press.

Professor Yusuf Tuna, a former member of the Turkish Banking Regulation and Supervisory Agency and current vice-president of Istanbul University of Commerce, commented that in his opinion the current trend of Islamophobia as reflected in institutions like the British press is worrying and could affect future investment activities on the part of Turkish investors.

Islamophobic rhetoric, particularly that which is appearing in the press, has created an unfriendly environment for Muslims who want to invest in London for business or any other high stakes purposes; there is a very real fear that a network of right-wing journalists with institutional backing can very easily harm their interests and reputation with illegitimate and unfounded accusations and smear campaigns. This uncertainty continues to grow; whether or not such irresponsible newspaper articles will lead to major crises like the one faced by the Dutch remains to be seen. But the stark reality is that a well-respected and experienced former minister, Baroness Warsi, and a respected community leader, government advisor and businessman, Muddassar Ahmed, have been targeted and find themselves confronting the slippery ghost of subtle – or perhaps not so subtle – innuendo and accusations.
Last Update: Mar 09, 2015 1:11 am
RELATED TOPICS