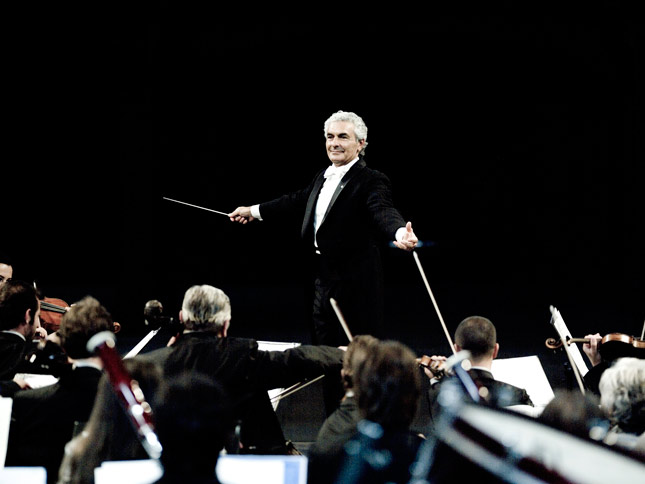 A total of 55 Turkish musicians who perform with international orchestras all around the world decided to perform together around a year ago under the baton of Gürer Aykal, a famous Turkish conductor. The orchestra’s debut concert took place on Feb. 28 in Istanbul to mark the beginning of an ambitious world tour

Turkish immigrants first migrated to Europe with the 1961 Turkish Labor Migration Agreement. They lent a hand to Europeans who were suffering from the devastating effects of World War II. They helped to rebuild Europe and began to earn a living in return for their efforts. In those years, Turkish artists and scientists were hardly mentioned at international platforms, yet radical changes have occurred in the last half century. Following their graduation, Turkish musicians went abroad and sharpened their skills in western countries, where some have become stars. Today, we feel proud of the success of Turkish musicians appearing in international orchestras all around the world. Around a year ago, some of them decided to perform together under the baton of Gürer Aykal. "Yıldızlar Topluluğu" (The Ensemble of Stars) was established with 55 musicians living in different countries. The orchestra's debut concert took place on Feb. 28 in Istanbul. Following the footsteps of esteemed musicians such as Hasan Ferit Alnar, Ulvi Cemal Erkin, Ahmed Adnan Saygun, Necil Kazım Akses and Cemal Reşit Rey, who have been granted state funds for further studies abroad, the orchestra is ambitious enough to tour around the world. During their debut concert, the stage was shining with talented musicians including violinist Hande Özyürek, who gave her first solo concert at the age of 16. Fora Baltacıgil, the first Turkish contrabassist chosen for the Berlin and New York Philharmonic Orchestras, and Efe Baltacıgil, a cellist announced as the associate principal cellist of the Philadelphia Orchestra at the age of 23, were also on stage. Among the group members, Önder Baloğlu has been playing the violin since the age of nine and has performed as the principal violinist of the Duisburg Philharmonic Orchestra for the past two years. He has received a number of awards and grants from local and international institutions as well. The founding father of the orchestra, also a horn player, is Ozan Göktan. He shared the idea of the project with Aykal, and the two quickly collaborated to make it happen. Göktan worked hard to choose the group members and personally contacted them with an invitation to join the project.

I had the chance to talk to them during their last rehearsal before the concert. Everybody was excited and in a hurry to finalize the preparations. They had not yet donned their concert outfits and were walking from one side to the other. Some of them were checking their instruments, while some were relaxing with a cup of coffee after a long flight.

Aykal, commonly referred to as the "ruthless maestro" among the orchestra musicians, took his place, and the melodies began to sound in harmony. When the orchestra took a break, we began to chat with the soloists. I first spoke with Fora Baltacıgil who said he was selected for the New York Philharmonic Orchestra among 300 candidates. He enjoyed studying with Edgar Meyer and now is a solo contrabassist with the Munich Philharmonic Orchestra. He expressed his happiness in becoming part of the new group. "I was invited to the orchestra six months ago. Although I have a very busy schedule, I did not reject them. I was not Aykal's student, but had a chance to appear with him at many concerts. It will be an enjoyable night. Applause shows the satisfaction of our audience. They really make me feel happy," Baltacıgil said. Özyürek was the first soloist of the concert. She began taking violin courses at the age of 11 and came first at the 15th International Vienna Music Competition. Currently residing in Munich, she is the principal violinist of the Munich Bavarian Radio Orchestra. "Twenty years ago, a similar project gathered Turkish musicians living in Europe. The orchestra is precious to me. We are all busy, but the project is important; so, we spend time here. Many people are now aware of Turkish musicians abroad. The world must see what we can achieve," she said enthusiastically. Efe Baltacıgil started his musical education at the Kadıköy Municipality Conservatory, and in 1998, he attended the Curtis Institute of Music in the U.S. He is presently a principal solo cellist at the Seattle Symphony Orchestra. The acclaimed musician has a dream of performing in the distant parts of Turkey. He has given concerts in Turkey in the past, and upon the request of Aykal, Baltacıgil joined the orchestra. Aykal was 11 years old when his talent was discovered by music experts in Diyarbakır, who then brought him to Ankara. He confounded the common saying that "Turks cannot be a conductor" by becoming the first Turkish conductor of the Presidential Symphony Orchestra. Aykal said as a nation, Turks are talented in music and expressed his satisfaction for the success of his students. "The number of Turkish musicians working with international orchestras is gradually increasing. When they asked me to appear as the orchestra's conductor, I happily accepted it," he said, adding the group's members want to perform all around the world. "We want to say the following: We are Turkish musicians living in Europe and let's listen to how we interpret Beethoven's pieces," he continued. Aykal said there are not many people who can achieve this because they fail to show the power of Turkey. He said the efforts of the group's musicians are very valuable, as all of them come from abroad. "Everyone misses their homeland. I know the feeling because I miss my home, too. Being at home is a different feeling," he concluded.