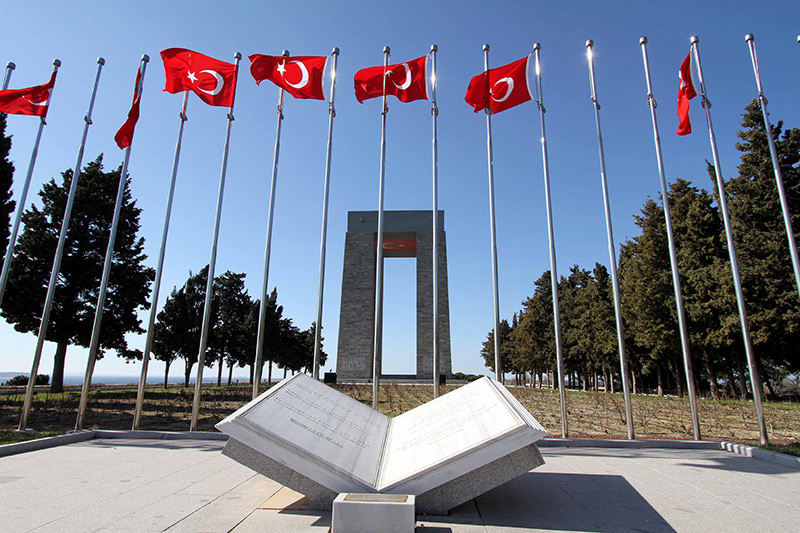 This year marks the centennial of the Gallipoli Campaign, which Turkey expects thousands to gather for in remembrance of this devastating battle. The commemorations demonstrate how the wounds of war can heal into friendships, as people from each side mourn together for a common purpose

The guides of Gallipoli do not walk ordinary tourists around - they help the descendants of those who died in the brutal violence of 1915 understand how the conflict shaped identity, achievement and existence for both sides. These experienced guides are also first-hand witnesses to the reconciliation that has grown up between Turks, Australians and New Zealanders. The three countries have grown into respectful friends, even if bullets flew between them 100 years ago.

Gallipoli (Gelibolu in Turkish) is six hours south of Istanbul and attracts hundreds of thousands of visitors every year who come in April to commemorate 1915's bloody conflict, known by Turks as the Battle of Çanakkale. It is a campaign regarded as a heroic war of defense by Turks, but a catastrophe for Australians and New Zealanders - grouped in the famous "Anzac" units - who were fighting on behalf of Britain.

"I have to say that Gallipoli is not an ordinary touristic destination," says Yurtsev Yarıcı, a 30-year-old Turkish tour guide.

Yarıcı, who has been working as a professional guide for 20 years, studied tourism in high school and university. Having even performed his national military service as a tour guide, Yarıcı is perfectly suited to the needs of tourists - he is talkative and well-informed about Gallipoli. Guiding nearly 20,000 domestic and foreign visitors every year, Yarıcı says that each tour has a special place in his career. "But my first day on the peninsula was really interesting; I witnessed the unifying power of the war," he says.

According to Yarıcı, he guided a group of elderly women who were Quran course students from a small Anatolian town. Then, in the same afternoon, he showed high-income Australian travelers around. "It was really an impressive moment for me to realize that those two quite different groups looked on the battlefield with the same eyes. They sensed the war with same feelings. Gallipoli is a uniting phenomenon. I will never forget my first day," Yarıcı says.

Gallipoli excursions generally focus on the Arıburnu and Canterbury cemeteries as well as Chunuk Bair, Lone Pine, Anzac Cove and Shrapnel Valley, which were strategically important scenes in the campaign. The conflict is accepted as one of the greatest Ottoman victories during World War I and a major Allied failure - but there were many casualties on both sides after eight months of fighting.

Around 13,000 New Zealanders and 50,000 Australians fought during the war and at least 2,700 New Zealanders and 8,700 Australians were killed. Ottoman forces lost almost 60,000 soldiers. Around 1,700 Indian soldiers, fighting for the British crown, also lost their lives. Yarıcı says the conflict became a source of national identity for both the Anzac countries and Turkey. "We do not need to tell the victory of Turks to the Anzac tourists; they are conscious of our victory and always show their respect," he says. According to Yarıcı, the Gallipoli campaign is not only the Turks' war of independence, but also that of the Anzacs: "April 24 is really an important day for Australians and New Zealanders, as March 18 [Turkey's annual Martyr's Day] is for us. The Allies commenced their attack on the Dardanelles (Çanakkale) but failed - so, it is important for us. That day was the first step of the Anzac people in discarding British nationalism which had been imposed on them throughout history, and in gaining their own national consciousness," he says.

Before Gallipoli, Turks, New Zealanders and Australians had never been in contact; the battle was the first time they faced one another.

According to İlhami Gezici, having run daily tours to the Anzac sites for over 18 years, Australians and New Zealanders really care about Turks and ask their guides what Turkish people think about Gallipoli.

Gezici, in his own words, "was born to work as a guide on the battlefields of Turkey." As a professional guide, Gezici was inspired by his high-school history teacher, who took students around the Gallipoli Peninsula and told stories about the land.

"They [visitors] mostly wonder about the deep esteem and solidarity between the Turkish and Anzac soldiers, even during the war," Gezici says. Both Yarıcı and Gezici agree that the Gallipoli campaign can stir diverse emotions.

Stating that Gallipoli is not only famous for being the setting of a glorious victory and the suffering of soldiers, Yarıcı says it is also famous for many legends and mysteries that occurred during the battles.

According to one story, a huge cloud swallowed nearly 2,700 soldiers and dozens of tanks of the British Royal Norfolk Regiment. Having enveloped them in the cloud, the soldiers then disappeared, astonishing Turkish, Australian and New Zealand fighters.

Yarıcı says there are many legends about the war.

In one of the tours, a visitor asked him about a river. He says she asked him about a rumor that there was a river on the peninsula. "She told me the story of a soldier who felt thirsty and looked for water during the battle. He heard that there was a flowing river. He knelt down to drink but he realized soon that it was not water but blood flowing like a river. She asked me to show her where that spot was," Yarıcı says.

According to Yarıcı, foreigners often ask for the Turkish-language place names on the peninsula and their meaning. "For example, they wonder why Turks call the Lone Pine 'Kanlı Sırt' which means 'Bloody Ridge' in Turkish."

However, the guides are in total agreement about this year's centennial commemorations. Although Gezici hopes the number of visitors will double, Yarıcı is disappointed by the high-level officials who have undertaken to organize the events marking the anniversary.

Gezici says this year's reservations are much better than last year, but Yarici thinks that the restrictions in the number of visitors who would be able to attend the ceremony have blighted anticipated turnout. "I have been waiting for the centennial anniversary for 20 years. But the officials firstly restricted the number of visitors for Anzac Day, then they announced that the March 18 anniversary will be closed to visitors as well," he says.

To be able to attend 2015's centenary ceremony, there is a ballot in New Zealand and Australia; around 40,000 people have applied for 10,000 tickets. "All those developments have affected our plans, but we still expect a rise in the number of the visitors compared to previous years," Yarıcı adds.

According to local sources, Çanakkale will host nearly 14,000 Australian and New Zealander tourists, with 14 cruises between April 18 and 25 as well as more than 20,000 Turkish visitors.

Turkey will commemorate the March 18 Çanakkale (Gallipoli) victory and Martyrs' Day, which is also the centenary of the Gallipoli Campaign that cost 500,000 lives from the Allied and Ottoman sides. According to the statement from the Çanakkale governorate, the events will begin at 9:30 a.m. with an opening ceremony that will be held at Çanakkale Stadium.

March 18, 1915, was the final day of naval operations during the Gallipoli Campaign in the Dardanelles, which was launched by the Allied powers on February 19, 1915, and concluded with an Ottoman victory. Almost a month later, the Allied powers began a powerful assault on the Dardanelles, but encountered a successful Ottoman counteroffensive. This caused them to withdraw and abandon the naval Campaign, even though they continued to fight the Gallipoli campaign afterward. On that day, the Ottomans sank three battleships and damaged another with mines, and inflicted 700 casualties to the British-French fleet.

Turkey is also preparing a commemoration ceremony for the centennial of the Gallipoli Campaign, which will be held on April 24, and presidents of many countries have already been invited to the event. This is also coincides with ANZAC Day on April 25, which is national day of remembrance to honor the members of the Australian and New Zealand Army Corps (ANZAC) who fought at Gallipoli against the Ottoman Empire during World War I. Turkey is expecting 10,000 visitors from Australia and New Zealand for the commemoration.