The imam of the 71st Regiment: An eyewitness to Gallipoli 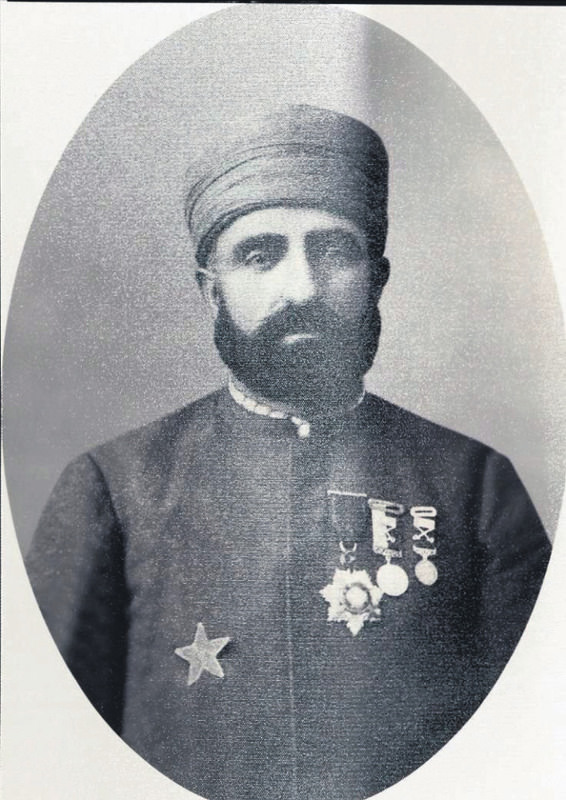 As many young people died at Gallipoli to protect their country, the imam of the 71st Regiment, Mustafa Memduh, carried out the rueful task of leading the prayers to preserve their souls and witnessing their passing from the world. His story was brought into light by collector Seyit Ahmet Sılay

Seyİt Ahmet Sılay, who previously unearthed the story of Lieutenant İbrahim Naci from the 71st Regiment of the 10th Division of the Battle of Gallipoli, has introduced the story of Mustafa Memduh, the imam of the regiment. "He officiated the most difficult duty," Sılay said. "He saw hundreds of young people become martyrs. He was one of the people who closely observed the Battle of Gallipoli and the pain it caused," he said. Sılay noted that he found the journal of İbrahim Naci thanks to Memduh due to the fact that he buried İbrahim Naci and the captain of the Regiment Bedri. "When he found İbrahim Naci's journal on Captain Bedri, he returned it to the late lieutenant's family," he informed.

When 21-year-old Lieutenant İbrahim Naci was appointed to the 71st Regiment of the 10th Division in Gallipoli, he wrote his name and the address of his family house in Istanbul's Beşiktaş district on the first page of his notebook and asked the person who found it to return it to his family if he died during the battle. The last entry in the journal belongs to June 21, 1915. He wrote, "We engaged with the enemy. Millions of cannons and rifles go off. My first corporal has just been injured. Farewell." After İbrahim Naci fell for his country, Captain Bedri Efendi secured his journal to return it to his family. "To be away from the young and green Naci, whom I just buried underground, is an irreparable lose for me and other soldiers in my regiment. But it was not the only loss of mine and my regiment, right?" Captain Bedri wrote in the journal about İbrahim Naci after his death. The captain also died 12 days later. Imam Mustafa Memduh noted down the death of the captain in the journal. Later, he executed the last will of İbrahim Naci and returned the journal to his family in Istanbul.

That journal has come to light 98 years later thanks to the work of collector Seyit Ahmet Sılay. The book about the journal has reached out to millions of people and Turkey has learned the story of the young lieutenant who died during the Battle of Gallipoli. Following his study on İbrahim Naci, Sılay tracked down Imam Mustafa Memduh who wrote the last entry in the journal. He investigated his story by meeting his relatives and close friends. Here is the story of Imam Memduh who witnessed the great sorrow of Gallipoli.

Born in 1880 in Rize's Hemşin district, Mustafa Memduh was serving as an imam in the army. Times were tough as the Ottoman Empire was coming to an end and it was engaged in wars on every side of the empire. Memduh first offered his services during the Balkan Wars before being appointed to the Gallipoli Front as the imam of the 71st Regiment. His job was to boost the morale of the soldiers and help them to stay strong spiritually. However, he had another painful job: He was paying respects to the young soldiers and laying them to rest. He collected the personal belongings of the dead soldiers and tried to return them to their families in any way he could. Memduh buried soldiers every day as the war heated up. While he was executing this difficult duty, he also tried to keep the soldiers' spirits high. After Gallipoli, another front needed his services.

Memduh was appointed to the Caucasus Front. He was taken prisoner on duty but managed to flee from the prison camp with the help of an Ottoman citizen of Armenian descent. He returned to his home, but his country was still in flames. This time, Mustafa Memduh made his way to another front of the Turkish War of Independence. He spent 15 years of his life serving for his country in various wars. Finally, he received three medals for his outstanding services in the Balkan Wars, the Gallipoli Campaign and the War of Independence. He worked as a records-keeper after the war, but his eyesight was badly affected by the DDT powder that is used to keep insects away from books in the archives. Unfortunately, he lost his eyesight completely towards the end of his life. He died in 1967 and was buried in his hometown Rize.

Sılay, who managed to uncover the story of Mustafa Memduh through his entry in İbrahim Naci's journal, suggests that Memduh is one of many heroes who are buried in the depths of history. Stating that he reached out to the relatives of Memduh after he published the journal of İbrahim Naci, the collector said he was able to unearth the photograph of a military imam who won medals. He noted that Memduh did not talk about his experiences in Gallipoli and continued, "He did not mention Gallipoli. I think that he could not handle remembering."

In order to gather information about Captain Bedri, Sılay conducted research at the General Staff Military History and Strategic Survey (ATESE), as well as at the archives of the Ministry of Defence. "I am trying to reach out to the family of Captain Bedri. It is the only missing piece of the journal. God willing, the story of Captain Bedri will be brought to light and he will be no longer a symbolic number and name in the dusty pages of the history," he said. "Let's remember that we owe every breath we take today to those who gave their last on the battlefield. Their biggest fear was to be forgotten," Sılay concluded.