Chapels on the Bosporus, Gargoyles in Chicago 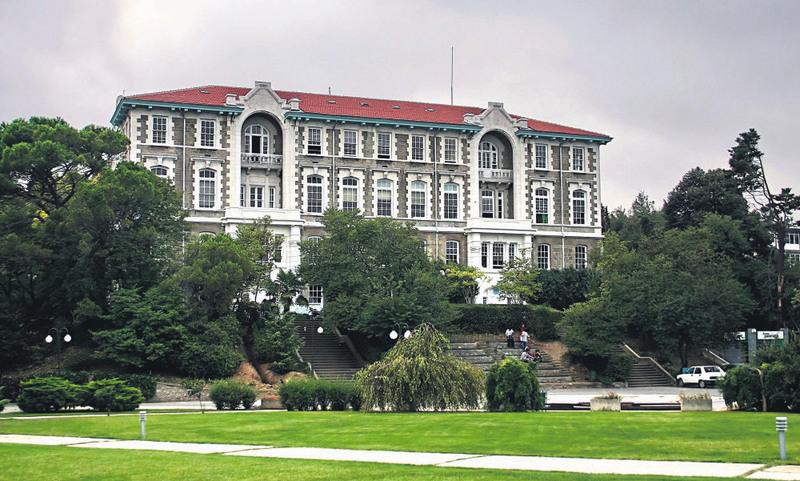 Sitting in what apparently was designed as a chapel on a campus that prides itself on being modeled after American colleges, I was overcome by a strange feeling. I had come to Boğaziçi University for the first time to attend a debate on democracy

I don't know why in the 20 plus years I have resided in Istanbul I have never gone to this famous campus on the Boğaziçi, but I hadn't. But last week, on a cold early spring day I found myself there.

True, I had been terribly spoilt in attending a high school that was part of the University of Chicago. The entire campus, quads and all, were at our disposal. And growing up with real swathes of green grass, Boğaziçi University did not move me.

I think that perhaps what colored my reaction to Boğaziçi University was the way my British parents viewed the University of Chicago, with its neo-Gothic buildings that mimicked Oxford and Cambridge. They scoffed at the imitation Gothic style, criticizing it for not being local or authentic.

The American-style campus seemed as out of place on the Boğaziçi as the gargoyles on the U of C campus are. The clock in the tower, the buildings around what we would have called a quad, the students sitting reading, talking, eating, playing Frisbee. It just seemed a trifle forced.

This is all beside the point. Boğaziçi University is a very successful university, and the American-based education is one of the best in Istanbul. Many students try to get into this prestigious institution and it gets the cream of the crop of Turkish (and international) students. So whether the architecture is authentic or not, much like the University of Chicago, another very good university, is not actually of any import.

But somehow it set the tone for the rest of the day. I had come there to be part of the audience for one of Tim Sebastian's Arab Debates; the topic was "Is democracy in Turkey in grave danger?" I had been invited, and although annoyed by the title, thought it worth going to watch and have my vote.

The title did, and still does annoy me. "Is democracy in Turkey in grave danger?" is not a proposition on which I want to vote yes or no. I don't want to vote yes, because I, and I think I can safely say 99.9 percent of the people I know, do not think democracy is in danger; that is, as long as the upcoming elections are allowed to go forth. Despite all the pre-election hype in the media, the government is doing its utmost to make the democratization of the country its priority.

Therein lies the problem. The government is concerned with the democratization of the country – that is, even the government is not claiming that there is democracy – yet – in Turkey. But things are much better than they were 20 years ago, even 10 years ago.

So that is why I wouldn't vote yes. So why not just vote no? Because if I vote no, am I saying that democracy in Turkey is not in "grave" danger, but it is in danger? I don't agree with that either; well, at least I do not agree that the government is posing the threat, which is the specter that floats behind this proposition. I would much rather have voted on a proposition that asked "Is democracy in Turkey in danger?" There is no need for hysterical adjectives.

The debate itself was interesting. I found the arguments that Binnaz Toprak, speaking for the Republican People's Party (CHP) put forward, interesting, although I did not agree with her conclusions. Moreover, the lack of clear alternative policies offered by the opposition party came to the fore in the debate. How can a party in power improve, grow and check itself if there is no opposition? The opposition in Turkey tends to just say no, rather than entering into useful or constructive debate.

Etyen Mahçupyan, who spoke for AK Party, tried to put across some interesting points, but the audience, full of students, wasn't having any of it. He talked about the sociological aspect of the past 13 years, referring to the fact that people who had never had a voice before in Turkey now could make themselves heard. But the students did not have patience to listen to this. They wanted to hear why "Twitter was in danger, why YouTube was under threat…" They wanted to talk about Gezi Park. They wanted to talk about the new Domestic Security Laws.

The new domestic security laws introduce measures to counteract terrorism in Turkey. There are a number of laws that have sparked controversy, including that covering one's face with a scarf or mask during a protest is now illegal. This was something that some protestors did during the Gezi Park riots; most of the people who did so came from a group called the Revolutionary People's Liberation Party-Front (DHKP-C). They made no attempt during the riots to hide their affiliation; their flags were out in the open, although their faces were hidden.

The DHKP-C is a group that is recognized as a terrorist organization by the EU and the United States. The DHKP-C is anti-NATO and anti-U.S. and wants to overthrow the Turkish government via revolution, claiming the government is under Western imperialist control. They have staged attacks against American institutions in Turkey, including the embassy in Ankara.

It is strange that just two days after this debate men from the DHKP-C, the group covering their faces in Gezi Park and throwing Molotov cocktails, held a public prosecutor hostage in the central courts in Istanbul, eventually shooting him. Mehmet Selim Kiraz died of his injuries shortly afterwards. On the following day an armed woman from this group tried to storm the central police station in Istanbul. These events merely serve to prove why Turkey needs stricter domestic security laws, laws that exist in Europe and in North America. Add to the fact that the DHKP-C is not the only such terrorist organization based in Turkey and that ISIS is on the other side of the volatile south eastern border, the argument that introducing domestic security laws is undemocratic seems flawed somehow.

Back to the alien feeling of the university. Most of the students sitting around me were listening, taking notes during the debate, taking it in. But there were many who grumbled every time Etyen Mahçupyan spoke; they didn't want to hear about how bad things had been in the past, about how much democracy had progressed in the last 10 years. One young lady stood up and spoke what (judging by the applause she received) many were thinking: "I am 23 years old. I don't care about the past. The past doesn't matter to me. What matters to me is that I want democracy and I want it now!"

As a "child of the 60s and 70s" I grew up among people who espoused revolutionary ideas, who debated and discussed them. My generation grew up in an atmosphere of debate about oppression, about the disconnect between the youth and the government, as well as discussions about the Gang of Four, Mao Zedung, Stalinism, Trotskyites and Communism, about the Vietnam conflict, about the evil of the draft and "imperialist war-mongering", as well as about the "oppression of the American police". We grew up learning about Martin Luther King and his dream, about Gandhi and non-violent resistance. The arguments that were held, the discussions which continued for hours were fascinating; this was a generation which, for the most part, knew about the past. They knew where Chairman Mao had sprung from, and knew his ideas. They knew the history of the civil rights movement, and why this movement concerned all of us. They had studied Gandhi and had read what he had written. This was an intellectual battle for them; the generation at that time was aware that without knowing where movements and ideas had sprung from it would be impossible to fight them. More importantly, there was awareness that the past shapes the present. If we ignore the past we are condemned to make the same errors over and over again.

The enthusiasm of the young generation today is remarkable. But it seems to lack the direction that it had during the birth of the "mother" of youth movements, the hippie movement. The intellectual depth is not there; rather today there is a dilettante nature which is disturbing. And what was particularly upsetting as I sat in a chapel, flanked by a massive church organ in a university on the Boğaziçi is that these people who were refusing to engage in the intellectual effort to defend their position and to criticize that which they opposed were students at one of the best intellectual institutions in the country.

I am not suggesting that all Turkish students or all members of the younger generation fail to commit intellectually. But there is a tendency today for instant gratification; perhaps this is the result of fast-food culture and the Internet. The McDonalds generation. I want what I want and I want it now.

The answer to that, I told them, was so easy….get involved. If you don't like the system, get involved. If there is a party that is close to your way of thinking, but it has flaws, join it and try to change it. If that doesn't work, get out and start something new. If starting a political party is beyond your means or opportunities, start a watchdog, a blog, a Twitter line. Be fair. Be impartial. Be unbiased. But get your voice heard. Criticize. But also, and this is very important, praise and focus on those things that are working.

The younger generation is one that does like to criticize the older generation. Although the hippies criticized the establishment and their parents' generation, and although there has always been "generation gaps," these are not comparable to the way the young people today criticize their parents' generation. There is a need for focusing on the positive, to bring the good to the fore. This does not mean that the negative should be ignored; there needs to be work, real intellectually based work, to change what is wrong. But at the same time there needs to be a focus on positive aspects. If this were done it could be a springboard for more change. There has been so much change in Turkey in the last decade, but there is a still a great deal to do before this country has full, safe and permanent democracy. If you don't believe me ask the prime minister. He will be the first to say that the most important thing for Turkey's future at the moment is democratization. That is, there is still some ground to cover; the prime minister and the party he heads are determined to cover this ground if they receive the mandate of the people in June this year.
Last Update: Apr 04, 2015 2:05 am
RELATED TOPICS