The end of France according to Houellebecq 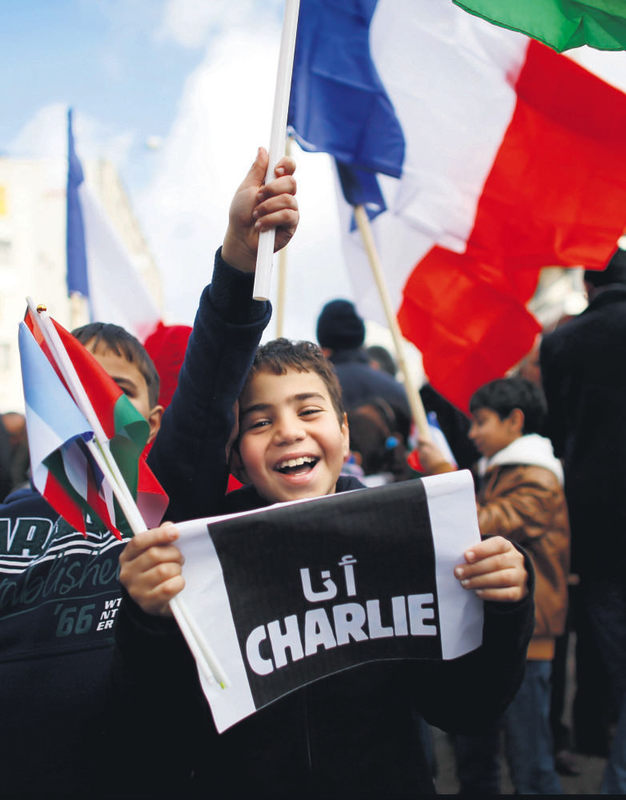 Michel Houellebecq's latest book ‘Soumission,' which can be described as a satirical prophecy, creates a scenario where Muslims come to power in coalition with the socialists in France. By an ironic coincidence, ‘Suomission' was published on the day of the Charlie Hebdo attack in Paris; in the wake of the attack, the book has become an instant best-seller and is being widely debated

The world got to know Michel Houellebecq's latest prophecy of doom concerning what he likes to call "our occidental way of life" when news channels reported that in the most recent issue of Charlie Hebdo that was published before the attack, "monsieur enfant terrible of French letters" was the cover cartoon. The cartoon was lampooning the conversion of the narrator of Soumission, whose voice – as with Houellebecq's other narrators – is almost identical to the author's. In "The Predictions of the Magus Houellebecq," the caption read, "In 2015 I lost my teeth; in 2022, I will keep Ramadan." It was a fair assessment of the feeling conveyed in Soumission set in 2022: Old France, the old Occident, has lost its teeth and is ready to seek refuge in any kind of ideology that may offer a promise of strength and greatness, even if it should be the end of the world as we, in the Occident, know it.

The first chapters are devoted to a description of France that has lost its way, a society at an impasse and ready to submit itself to a more vigorous force to a coup de grace. Even though Houllebecq does not have a university degree, the chapters are a very incisive and offer a ruthless take down of French academia, including describing the internecine warring in the departments and silly bickering about who is better than who in French literature. Although much of the talk about the novel before anyone had even read it was about the fateful fictional elections that result in the victory of an Islamic party, the event only happens after the first half.

From the very start, we are firmly in Houellebecq territory, as the narrator, François, peppers the narrative with several synonyms for "dislike," "nausea" and "hate." He admits to having no friends, and as a proper misanthrope, is suspicious of people who want to spend time with him. Early on in the book, one of his colleagues who is into the multicultural lifestyle that François despises invites him to have tea at the central mosque in Paris – a beautiful building whose cafe has made its way into the city's travel guides. He doesn't want to go but does all the same, and his reaction is pure Houellebecq: "I didn't like mint tea, I didn't like the grand mosque of Paris and I didn't like Steve." And once the reader knows that there's very little that gives joy to the man, he or she has been inoculated against future racial or cultural slurs that one expects to be in the offing, but the offense the media's reaction to the novel promised refuses to materialize. For a book that is "advertised" as Islamaphobic, there's too little criticism of political Islam and much too much French intellectual navel gazing. With Houellebecq's narrators, as one expects, navel gazing takes on many dimensions. Along with his academic feats, François recounts his love affairs, his lovers' habits in the bedroom and how the women he dated were every bit as tricked by the bourgeois, capitalist and consumer culture that pushes them into conventional female roles. He is forever assessing the female bodies he sees on the streets, gazing forever, into the navels of the women, and finding himself lacking when he discovers that he is not as easily aroused any more. Moreover, his body is falling apart; he gets eczema and all manner of unseemly illnesses. Indeed, the book encompasses the end of meaningful scholarship, the end of libido, the end of the white male body and the end of France.

François is an expert on Huysmans, who is famous for novels exploring the (bodily) excesses of the upper classes in order to attain some kind satisfaction or knowledge. The esoteric concerns of the ivory tower and how those who live in it are out of touch, or even indifferent to what is happening outside their period houses is thoroughly ridiculed when a literary garden party is interrupted by sounds of explosions and visions of smoke coming from questionable parts of the city. It is the night of the election and the French nationalists have realized that with the support of the liberals, Ben Abbes, the head of the Islamic party – the name that sounds not unlike Abbess, a salute to the Catholic heritage that France has not be able to rekindle and so will have to do with Islamic heritage – can indeed be president. François passes the night with a colleague near the Chinese neighborhood and takes comfort in the fact that, by sheer numbers, the Chinese would stall a complete Islamization of the world. François also reports rumors about Sarkozy returning to politics, but finds them unlikely. In Houellebecq's world, Sarkozy has suffered a terrible defeat in 2017 and has left politics for good.

In anticipation of the Abbes win, the Front National (FN) take to the streets of Paris. Seeing the multitude disconcerts François, a consternation shared by many who found themselves protesting next to FN members during the demonstrations against the attacks on Charlie Hebdo. When Muslims come to power in coalition with the socialists, they take on the education ministry, and the one effect of Islam that François is able to recognize is that colleagues who have converted now have several wives. Also, to the horror of a professional voyeur, less and less women seem to be wearing skirts – a mode of clothing frowned upon by certain Islamic circles, mind you. No one is seen praying and there is no mention of minarets that may raise their pointy heads in the boulevards, an eventuality that has alarmed so many in neighboring Switzerland. With some kind of "Alice in Wonderland" logic and a very antiquated understanding of employment that seems to be operative in his fictional world, funds are reallocated from education to family support, and unemployment goes down with the women returning home. And then it is revealed that only non-Muslim women have accepted this incentive, as the narrator starts seeing more and more veiled women working in public spaces – possibly because the misogynistic narrator cannot, for the life of him, conceive of male secretaries.Rather encyclopedic at times, Houellebecq has his characters recount the genealogy of religion, humanism, atheism and secularism. After giving us a brief history of jihadism and Salafism as well, Houellebecq has one of his characters convince François that French Muslims "aren't like that," that they'll achieve their ends through peaceful means. In a way, that we should wait for a Muslim president and/or sharia for a curriculum that teaches about Islam and that caters to the needs of France's Muslims can be seen as the admission of defeat of the secular and humanist ideals of the French Republic, which declares itself equidistant to the lifestyles of all its citizens. Very conveniently, the place François goes to pass the time until the new order is established is Poitiers, which gives Houellebecq the chance to regale the reader with the story of how it was here that the Muslim armies of Andalucia were stopped. Even where anti-Muslim sentiment should be high, historically-speaking, the total resignation of France is exemplified in the hotel keeper's explanation that the days of Charles Martel are over; that today is a day to "accommodate" and form an "alliance" with Islam. While this shows the encroachment of Islam into European space, at the same time, it underscores that Islam is not a foreign presence that some European politicians want to make it out to be.It is here that François – the name suggesting the French "everyman," even though he isn't – contemplates the fall of French civilization and completely surrenders to history. There is a silver lining in a Muslim takeover of France, though, which reveals Houellebecq's trust in the wholesale Francophonization of North Africa. With Ben Abbes at the helm, a colleague reminds François that North African countries can enter the EU and then the "linguistic balance will shift towards French in Europe." Indeed, it is not hard to believe that the French will be ready for a pact with the barbarians so that French beats English in the war of language supremacy. After all, during the evocations of the Roman Empire under Ben Abbes – who the narrator says can be an Emperor Augustus for France only a few pages before the end of the book – does Houellebecq name a resemblance to the Ottoman Empire – the obvious specter that has been haunting the novel from the very beginning, particularly when describing organizing state education according to religious beliefs. Recounting to himself and the reader the cynicism with which Rediger and his several colleagues have converted to Islam – either as a rejection of the modernity that has crippled France or as a way to get a promotion – François accepts that this is the fitting way to react to the current hollow and depraved state of things, short of suicide. It is not the Muslim immigrants who have made France the empty shell François/Houellebecq perceives it to be, but the inanity of a cultured class who have not been able to resurrect any 'indigenous' heritage – and Medieval Europe is presented as a contender several times in the book – that would give back the country its vitality.

The book ends with the narrator imagining how his conversion will proceed, how the witnesses shall

welcome him, how his disintegrating body will find new life and vigor in the hammams and how on his return to the university his female students will feel honored to have been chosen as his wives. All this is conveyed in the future conditional tense, and the book ends with a rephrasing of Edith Piaf's famous line "Je n'aurais rien a regretter."
Last Update: Apr 06, 2015 2:02 pm
RELATED TOPICS