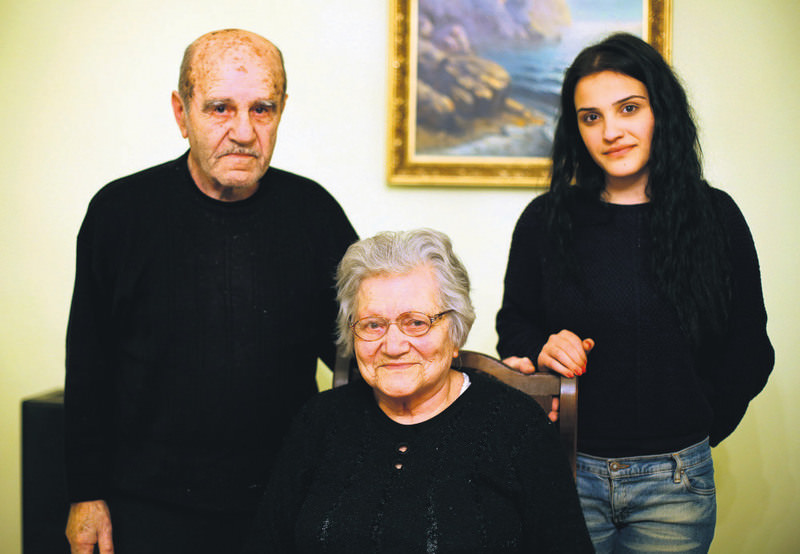 Many assume that history between Turks and the Armenians is black and white, but the story of one family in Yerevan reveals that lives and languages in this part of the world can be inseparably intertwined

Turkish-Armenian journalist Hrant Dink once described Turkey and Armenia as "two close nations, two distant neighbors." One such "distant neighbor" is Hovhannes Avagyan, who was born in Athens in 1920, the same year the multi-ethnic Ottoman Empire was collapsing and Armenia become part of the Soviet Union.

Now living in Armenia, Hovhannes has never been to Turkey, but his family, including his two granddaughters, speaks fluent Turkish.

The Avagyans' story begins with the Anatolian Armenians during the Ottoman era even before Hovhannes was born. His grandfather, Agop, was from Ankara and his grandmother was from Turkey's western province of Afyon. Agop was a baker in the Ottoman army during the Gallipoli Campaign in 1915. Meanwhile Agop's sons – Melkon and Rupen, 12 years old and 14 years old at the time, lived in Ankara until their mother died from an illness. During the turmoil of WWI, the two brothers stayed in Istanbul for a time and then took shelter in a U.S.-funded orphanage in Greece.

When Agop was discharged from the Ottoman army, he began to look for his children by sending letters to churches and orphanages. Agop eventually found them in Athens working as shoe shiners. By the time they met again, Melkon was 17 and Ruben was 19. The reunited family began living in a tent city in Athens with thousands of other ethnic Armenians. Ruben married an Armenian woman from Turkey's Aegean province of Uşak and eventually moved to France. It was also in Athens where Melkon met his future partner and Hovhannes' mother – an Armenian woman who was also staying in a tent city in the Greek city of Thessaloniki while visiting the city.

When the family bought a small piece of land from a wealthy Armenian family in Athens, Hovhannes's parents and grandfather built a simple house made of adobe brick. They lived together in Athens and worked in their own grocery store and bakery until 1945 when an official from the Soviet Union came to talk to them about moving to Armenia. At first, they did not want to go. The Avagyans' eschewed the first two ships that ferried thousands of hopeful Armenian immigrants seeking a new life in their ancestral homeland. But eventually, the number of Armenians in Athens decreased so significantly that the Avagyans found themselves running out of customers.

The loss of their regular customers hit the business hard because some local Greeks refused to shop at an Armenian store. "As [our name] was written on the shop sign – Agop Avagyan – local Greeks did not deal with us Armenians," said Hovhannes, sitting in his home in Yerevan, Armenia's capital.

In the end, this situation led them to board a ship with around 2,700 other passengers in 1947. Including the Avagyan family, this third group passed through Istanbul's Bosporus Strait en route to a new life and an uncertain future in Armenia. Hovhannes recalls that time: "Armenians living in Istanbul were waving white sheets to salute them."

The family arrived in Yerevan, and Hovhannes' father re-established his bakery while Hovhannes worked as a bus driver. Hovhannes married his wife Pertshuhi Krepekyan – now 83 – in 1955. Looking at Pertshuhi, Hovhannes recalled living under communism. "I can speak with you openly now, but under [Joseph] Stalin's rule, I could not even speak freely with my wife." Pertshuhi, who also speaks Turkish and whose parents were from Turkey's southern province of Adana, came to Armenia via Lebanon.

Coming "home" was not the happy ending the Avagyan family had dreamed of. "My father always wanted to see where he was born," Hovhannes said, musing. "But it was Soviet times and it was very difficult."

They kept speaking Turkish at home, which is why even today both Hovhannes and Pertshuhi speak fluent Turkish with an Anatolian accent. Their first years in Armenia were not easy; they were the newcomers and they were called "ahpar" (brother), but Hovhannes' Yerevan-born granddaughter Pertshuhi Avagyan, 24, said it carried marginalizing connotations.

Coming from Anatolia meant a different cuisine as well as culture. "Even eating olives was strange for the locals, as they did not have them here in Armenia," said granddaughter Pertshuhi, who is a linguist and translator. Hovhannes still misses traditional tahini halva, a dessert that is quite common in western Anatolia and Greece.

Although he and his family have never lived in Turkey, their granddaughters learned to speak Turkish just by listening to her grandparents and watching Turkish TV. "I was watching Turkish TV programs and cartoons since I do not even remember, maybe from when I was six years old," Pertshuhi said. Pertshuhi – named after her Lebanon-born grandmother – said, "It is very difficult to comment about Turks without going there even once, but I can say this: The people there are very warm and hospitable, just like Armenians."

Pertshuhi hopes to peacefully live together with Turks with "doors open," a reference to the Turkish-Armenian border, which has been closed since 1993.

It is true that no member of the Avagyan family alive today ever lived in Turkey at any time. But from their way of speaking to their cuisine and the Hovhannes' attitude to his granddaughter – disapproving when she arrived at home a little late that night – they are Anatolian. As Hovhannes puts it, "We are from Turkey, I never forgot this."
Last Update: Apr 06, 2015 9:52 pm
RELATED TOPICS