The Çanakkale Old Central Hospital: An eyewitness to history 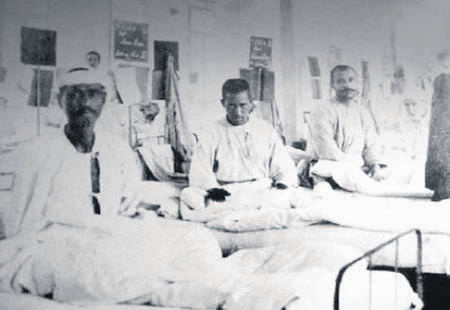 The Ottoman-era Çanakkale Old Central Hospital, which treated thousands of casualties during the Gallipoli Campaign and World War I, is at the center of a restoration bid by Istanbul Technical University

A veteran of four wars has fallen on hard times. A 19th-century hospital in the western Turkish province of Çanakkale has seen devastating conflict as well as been a sanctuary for thousands of dying and wounded soldiers, both friend and foe.

Now, the ruined Ottoman-era facility could be at the center of a new restoration bid. "Located on a slope dominated by a sea view, the Çanakkale Old Central Hospital [Kale-i Sultaniye Hastahane-i Askeriyye in Ottoman] has been an eyewitness to history since the 1890s, in spite of being half-ruined today" - so said architect and restorations expert at Istanbul Technical University (İTÜ), Senem Yiğit Kahraman, writing in the Turkish Yearbook of Çanakkale Studies.

Kahraman said the hospital was originally built as a military institution, with a 1,000-person capacity. "It also aimed to increase the number of personnel and doctors in the region due to the wars at that time."

Having been strengthened during the 1911 Turkish-Italian Tripoli War and the 1912-1913 Balkan War, the hospital served as a central medical facility for mobile army health units in 1914-1915 during the Gallipoli Campaign and World War I.

"It was also used as a hospital for the seriously wounded by 1916. It received many injured people, treated the dying and dealt with the death toll," Kahraman said. By the time WWI ended, more than four years later, 10 million people had died. The 19th century was truly over and the 20th century – the bloodiest in human history – had begun.

But the Gallipoli Campaign had quite a different aspect for the Turkish side compared to the entirety of WWI, as it moved from war to victory and tragedy before becoming an epic. The victory against the Allies in the Dardanelles (Çanakkale) Strait gave the Turks a massive morale boost that enabled them to wage a war of independence and eventually, in 1923, form the Republic of Turkey from the ashes of the Ottoman Empire.

However, the cost was the death of tens of thousands of soldiers and civilians, along with tens of thousands of Europeans, around 7,000-8,000 Australians and nearly 3,000 New Zealanders. Nurhan Aydın, an academic at Kafkas University, wrote an article entitled "The Sanitary Matters and Evacuation Services in the Çanakkale Wars," and reported how the soldiers living in trenches tried to survive amid stagnant water and inadequate sanitation conditions. "Conditions were harsh; the area possessed no natural water source, and the soldiers were also racked with disease," Aydın said, adding that the wait for treatment and evacuation was often long and agonizing. Moreover, the number of the wounded sometimes exceeded 4,000 people per day during the major clashes.

ahraman said Çanakkale Old Central Hospital played a significant role in the treatment and discharge process of soldiers during wartime. According to the Turkish Medical Department, Çanakkale hospitals, including the Old Central Hospital, hosted more than 110,000 wounded and 70,000 sick people in just a few months during the Gallipoli Campaign. However, today most of the Ottoman-period hospitals are in a ruinous state, with the Old Central Hospital taking some of the worst punishment. "The hospital received the most damage during the Gallipoli Campaign. It was bombed during the war, over and over again," according to Kahraman. "British forces bombed it twice on the same day despite displaying all the warning signs indicating it was a hospital," she claimed. Although it was damaged by bombings, the hospital did not stop operating until the Armistice of Mudros was signed on October 1918 when the Allies invaded Anatolia, demilitarized Çanakkale and closed the facility. "The destructive effect of the bombings is still visible at the site. The north and west wings have collapsed … Only a fraction of the 75-centimeter-thick masonry walls from the hospital remain today," Kahraman said.

According to the Turkish Yearbook of Çanakkale Studies, the western wing was bombed by British planes during WWI. Approximately 90 percent of the walls of the northern and western blocks was demolished. There are small pieces surviving from the timber roof that covered the building, which has endured decades of neglect. "Therefore, the stone elements and mortar of the walls have been exposed to fires and earthquakes over the years as well as freezing-and-thawing cycles, snow, rain and wind," Kahraman wrote.

Now, İTÜ is offering some ideas for projects to preserve and protect the remaining parts of the hospital that played a meaningful role in the past. "As part of the restoration project, which aims to give future generations the ability to discover the past, protecting and strengthening the existing ruins is the biggest priority," Kahraman said. The restoration project proposes that the east and south wings of the building be reconstructed and the west and north wings be used as an open-air museum. "With the restoration, it will continue to serve humanity and history as it did in the past," Kahraman added.

Turkey is preparing a commemoration ceremony for the centennial of the Gallipoli Campaign, which will be held on April 24, and presidents of many countries have already been invited to the event. This is also coincides with ANZAC Day on April 25, which is national day of remembrance to honor the members of the Australian and New Zealand Army Corps (ANZAC) who fought at Gallipoli against the Ottoman Empire during World War I. Turkey is expecting 10,000 visitors from Australia and New Zealand for the commemoration.
Last Update: Apr 07, 2015 11:19 pm
RELATED TOPICS