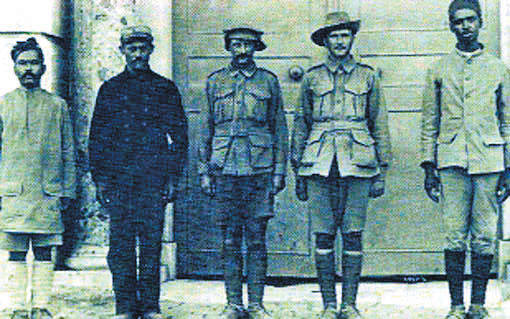 Anzac soldiers who were taken prisoner during Gallipoli War.
by Daily Sabah with AA Apr 13, 2015 12:00 am

A total of 24 journalists from eight countries reported on what was one of the most intense fronts during WWI, the Gallipoli Campaign. Their observations as well as the memoirs of veterans reveal the Ottomans' good treatment of foreign prisoners of war during captivity

"The foreign journalists commended, in particular, the way Ottoman troops treated the foreign prisoners of war, despite the heaviness and violence of the war," Professor Selda Kaya Kılıç at Ankara University's Department of History told Anadolu Agency.

Speaking ahead of the upcoming 100th anniversary of the Battle of Gallipoli on April 25, Kılıç said that foreign journalists reporting on the battle called each of the Ottoman troops a "hero," and said that they treated the prisoners of war "extremely well."

On April 25, 1915, eight months into the First World War, Allied soldiers landed on the shores of the Gallipoli peninsula – also known as Gelibolu. The troops were there as part of a plan to open the Dardanelles Strait on Turkey's Aegean coast to Allied fleets, allowing them to threaten the Ottoman capital, Istanbul.

Allied forces, however, encountered strong and courageous resistance from the Ottomans, and the campaign devolved into a costly failure.

Kılıç said that a special permit or license was required to become a war correspondent during WWI, and 24 journalists from eight countries reported on the Battle of Gallipoli in addition to four Ottoman journalists, according to official records.

The foreign journalists came from the U.S., U.K., Germany, Sweden, Bulgaria, Spain, Denmark and Hungary, and their reports, diaries, letters and photographs from the battlefield have "high historic value," Kılıç emphasized.

She said that one of the most notable and well-known journalists reporting on Gallipoli was the British war correspondent Ellis Ashmead-Bartlett, who described the battle as "a combat of giants in a giant country."

As for the shortcomings of the Ottoman Army regarding military equipment, Kılıç said foreign journalists were especially impressed with the "superhuman efforts of the Ottoman soldiers, despite all the hardships and challenges, as well as their resilience in the face of adverse conditions. However, most important of all, they were particularly impressed with the kind of treatment offered to Allied POWs, despite the fact that they had come to invade their homeland."

These feelings and thoughts are not only stated in Ottoman and Turkish sources, but in Australian sources as well.

Historian and certified public translator Doğan Şahin, who worked with Australian war sources for many years, stressed that trench memoires hold great importance in terms of historical sources although it has been 97 years since the war ended. He also underscored that many manuscripts and memoirs have been unearthed since the end of the war.

Charles Suckling, who was one of the crew members of the AE-2 E-class submarine of the Royal Australian Navy (RAN) and brought to Istanbul after he and his fellow crewmen were captured, wrote the following in his journal: "After getting off the ship, we were brought to a place that I believe was a military barracks. As we walked on the streets, it seemed like all the people in Istanbul were standing on both sides of the road just to see us. They did not show us any hostility. When we arrived at the military barracks, we were given Turkish navy soldiers' attire, jackets, slippers and a fez. Our own clothes were collected and our photos were taken after we gathered in a meeting place. With the help of a translator, the Ottoman commander told us that we should not consider ourselves as prisoners but guests of the Turkish state. We were to ask him if we wanted something and he would do everything he could to make it happen. The Ottoman officers listened to us calmly and patiently."

Lt. John Pitt Cary, another POW, wrote about his days in captivity as well: "I shared a house with other officers. During my time in Afyonkarahisar, I drew and painted with oil paint. I fed one of the turtles I found in the garden as if it was a pet and organized betting games. I enjoyed racing my turtle."

Turkey is preparing a commemoration ceremony for the centennial of the Gallipoli Campaign, which will be held on April 24, and heads of government from many countries have already been invited to the event. This also coincides with ANZAC Day on April 25, which is national day of remembrance to honor the members of those who fought at Gallipoli against the Ottoman Empire during World War I. Turkey is expecting 10,000 visitors from Australia and New Zealand for the commemoration.

Gelibolu is six hours south of Istanbul and attracts hundreds of thousands of visitors every year for the commemorations.
Last Update: Apr 15, 2015 11:39 pm
RELATED TOPICS