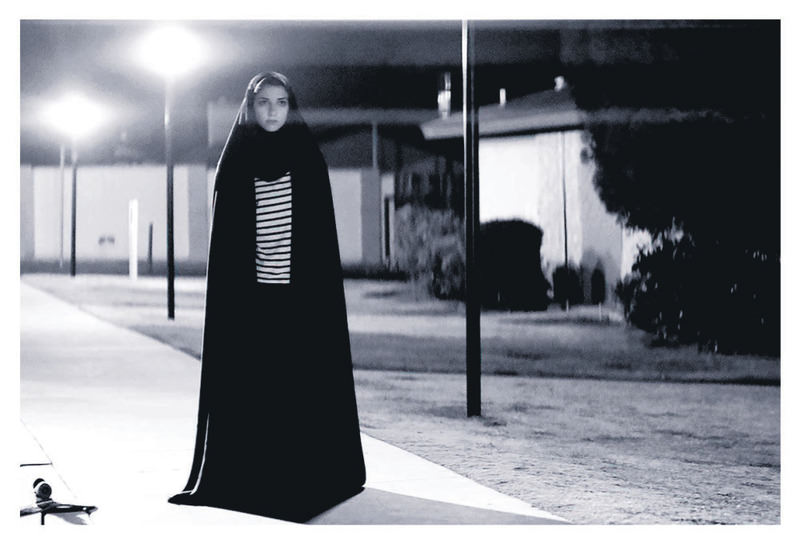 ‘A Girl Walks Home Alone at Night' was one of the most intriguing films in the Istanbul Independent Film Festival. The movie creates a very unique American-Iranian landscape with many references and motifs. The Iranian director of the film, Ana Lilly Amirpour, described it as an ‘Iranian vampire spaghetti western'

The shared title of this article and Ana Lilly Amirpour's Iranian film remains one that still speaks of threat and danger while suggesting a precarious end. "A Girl Walks Home Alone at Night" was one of the closing films of the Istanbul Independent Film Festival. When watching the film, the recent assaults on women in the streets and public transport in Turkey cannot have been far from the festival-goers' minds. In the film, however, the tale of woe and violence promised by the title is soon turned on its head when we discover that the girl in question walks home alone at night, not being threatened by members of the less fair sex, but threatening them herself. Our heroine, simply known as the Girl, and played by Sheila Vand, is a vampire, and the film is – in the words of U.K.-born, U.S.-educated Amirpour – an "Iranian vampire spaghetti western." The film is shot in black and white, and as the soundtrack reveals, it in many ways pays homage to Jim Jarmusch – particularly his latest "Only Lovers Left Alive," another vampire film.

"A Girl Walks Home Alone at Night" is set in an eerie landscape, eerie in the sense that while we recognize the American suburbia setting from the horror films we are familiar with, the actors are Persian and speak Farsi. To complete the through-the-looking-glass effect, the director placed Persian street signs outside trailer parks – the film was shot in Tafts, California – and the cultural and political codes communicate that we are in Iran. When we move inside buildings, we are met with the kind of social dissolution we are familiar with everywhere around the world, but particularly in the U.S., because we have been exposed to their narratives the most: Broken families, drug addiction, prostitution and the callousness of the rich. These are problems endemic in countries that may consider themselves to be exact opposite of each other – indeed, as through a looking glass.

The film starts with Arash who deals drugs and tries to keep his addicted father, who owes money to the drug lord, Saeed, out of trouble. Saeed is the film's villain, confiscating Arash's car and stealing the money of the woman he pimps. One night, Saeed is caught, in flagrante so to speak, in the car he's confiscated. The vampire girl appears like a ghost at the back of the vehicle and marks him as her target. The audience knows that she will take revenge for the women of the night – those who are walking home and those who are selling their bodies. She, dressed in her billowing chador, brushes past Saeed one night, and the lewd smile he throws at her lets the audience know – if they had any doubts in their minds – that women can be and indeed are attacked irrespective of what they may be wearing. However, it is not long before she follows him to his apartment and kills him. From very early on, the chador transforms from a perceived symbol of male oppression into one of disguise, horror and revenge.

Arash gets lured into the world of the Girl when he comes to Saeed's place to ask for his car back. As she leaves the scene of her crime, she brushes past him as well – here is a woman who is not afraid of invading male space. It may be considered a defeatist stance to claim that women can be safe on the streets only if they are vampires, that is to say, when they are not women. However, it is still cathartic to see a woman in a chador, one of the most reviled, pitied and attacked figures on the planet, get her own back.

The spoiled daughter of the family Arash shops for references amongst the attitudes of the reality show "Shahs of Sunset," which follows the lives of rich Iranian-Americans in Los Angeles. With all these references and motifs, Amirpour creates a very unique American-Iranian landscape. The viewers' sense of being lost is articulated by Arash one night when he loses his way trying to get home from a party attended by the rich Iranian-American youth. As it is, Arash is dressed in a Count Dracula costume for the party he just left, and he bumps into the Girl who is roaming the streets with her flowing chador. Arash asks her if he is lost and asks where he is, to which she answers "Shahr-e Bad." Indeed, apart from the element of the uncanny America-Iran twinning, there is an element of language for the Turkish viewer who recognizes the borrowed words and expects the actors to break into full-blown Turkish at any minute. The Girl takes Arash to her apartment where she takes off her chador, and it is as if we are transported to a nouvelle vague film, with atmospheric music and orchestrated French silences.

The key moment of the film takes place when the Girl is roaming the streets again one night. She first scares Arash's father who is out on the town looking for drugs and paid-for intimacy, and then we see her approach a small beggar boy that Arash had refused to give money to at the beginning of the film. The boy is skating on a board whose origin seems questionable to say the least. The Girl comes scarily close to his face and asks him several times whether he has been a good boy, not happy with his repeated answer of yes. She tells him to tell her the truth, and assures the trembling boy that she will be watching his every move until the day he dies. It seems as if the Girl is trying to put the fear of God or fear of the vampire into the heart of the little boy who, one hopes, will be a good boy who treats everyone, particularly girls who walk home alone at night, with due respect.

To drive home the similarities between the American and Iranian landscape, Amirpour scatters shots of oil rigs throughout the film. It's a post-industrial world, where the factories don't seem to be working, and ravines are literally filled with the corpses of the unwanted workers who are not needed anymore. The most obvious homage to "Only Lovers Left Alive," which was shot partly in the industrial wasteland of Detroit, comes when Arash and the Girl have a date at night just outside an electric plant. The car and the metal of the building shine in the night to add to the dramatic effect of their silence. He offers her a hamburger and she holds it without eating, obeying vampire conventions. In turn, he says he has never met anyone who doesn't like hamburgers. Of course, in a country where all things American are the work of the devil, this is a philistine refusal. The aesthetic triumph of the film is that we never get to learn how the Girl became a vampire.

After a series of unfortunate events, the two ride off into the darkness – keeping with Amirpour's western theme. The Girl gives Arash proof that she can be very dangerous, and he accepts the challenge by playing a cassette in the car's stereo. Again, convention tells us that even vampires don't want to be on their own; in the end, she is in a car with a boyfriend – neither alone nor walking – and one could argue that she has become a traitor. One can only hope that when the ride ends, she will be roaming the streets of other bad cities feeding herself on the corrupt, and telling small boys to be good for the rest of their lives.
Last Update: Apr 14, 2015 11:49 pm
RELATED TOPICS