From point A to point B: All about Istanbul's transportation for hot spots 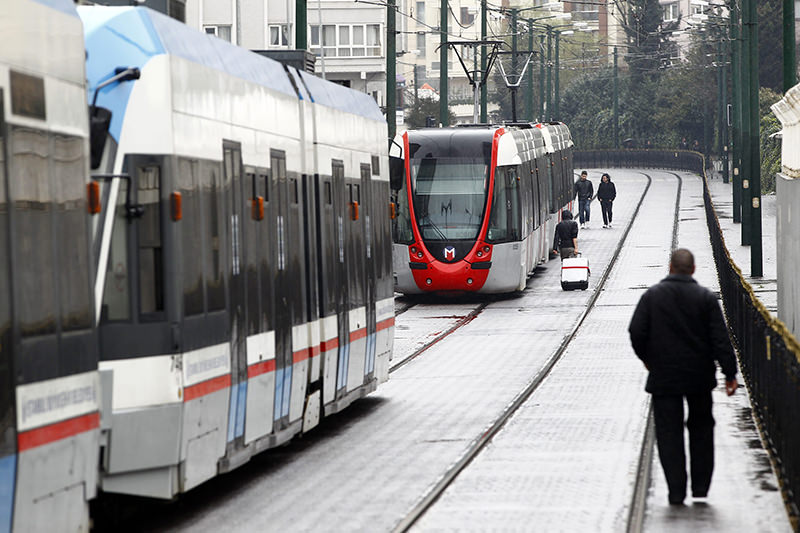 | AA Photo
by İzlem Arsiya Apr 22, 2015 12:00 am
Istanbul is a big city with many fun and exciting activities and sights to offer tourists and locals alike. While it may be fun to daydream about the attractions, it is often a nightmare to think about how to get from A to B. Luckily, Istanbul has an amazing transportation system that connects the city's major points and everything in between. The city's transportation system is modern, clean, efficient and inexpensive, making it the most ideal form of travelling around the city.

Istanbul has all forms of transportation for people traveling to almost any place. Buses, metrobuses, trams, funiculars, subways, many types of ferries, sea buses and even gondolas are some of the ways of getting around. Let's take a look at how to uses the public transportation system and where you can go.

The IstanbulKart, or tokens, are used to pay for almost all buses and trams. The electronic card called IstanbulKart can be found at selling points all around the city. The card itself costs about TL 10 ($3.70), which you only need to buy once, and then you are free to charge it with as much credit as you need, according to your schedule. If you are going to be in the city for less than three or four days, then you might want to opt for using tokens (jeton), which you can buy at service points or vending machines clearly marked "Jetonmatik."

Probably one of the most frequently-used forms of moving about the city is the M2 Yenikapi-Haciosman metro line. It is a fast and cheap form of traveling, and the best part is that it does not get stuck in traffic. Though most of the metro runs underground, it surfaces in order to cross the Haliç Bridge while connecting to Taksim, so passengers get a beautiful view as a break from the darkness of the underground tunnels. This metro line has stops at the following locations:

Taksim at Taksim Square itself, Cihangir, Galata, connection to Kabataş via funicular (F1) and Eminönü/Sultanahmet via tramway (T1).

Levent, near shopping centers such as Metrocity, Kanyon, and Akmerkez with an additional walk or short taxi ride.

For tourist destinations, most visitors prefer to use the T1 Bağcılar-Kabataş tramline. Though they may sometimes get stuck in traffic, the tram is a great way to travel for those who have the time and want to do a little sightseeing. Because the tram travels at street level, it is the perfect combination of commuting and seeing the sights. The tram has stops throughout the city that connect to other lines and forms of transport to make your commute even easier. Some of these stops include:

Beyazit near the Grand Bazaar and Süleymaniye Mosque;

Sultanahmet near Topkapı Palace, Hagia Sofia, the Blue Mosque and the Basilica Cistern;

Eminönü near the Spice Bazaar and ferry docks.;

Karaköy connection to Tünel (T), which brings you to the end of İstiklal Avenue;

Kabataş connection to Taksim via the funicular (F1), fast ferry or sea bus docks to the Princes' Islands and Kadıköy and a five minute walk to Dolmabahçe Palace.

Because Istanbul is situated on two different continents, it is essential for the city to have multiple ferries crossing the Bosphorus. Some of the most central docks are Eminönü Haliç İskelesi, Kabataş İskelesi, Kadıköy İskelesi, Üsküdar İskelesi and Beşiktaş İskelesi. The ferries work on a schedule, with a new ferry departing around every 20 to 30 minutes, but faster ferries called "motor" leave every 10 to 15 minutes. If you have time and the weather is nice, ferries can be an enjoyable form of commuting while enjoying the water, sun, simit and tea served on the boats.

If you do need to go to the other side but you do not have time to enjoy a breezy and sunny 30-minute ride, it is preferable to use the Marmaray, which is an underground metro that connects the Asian side with the European side. Yes, this metro line runs underground, or rather, underwater below the Bosporus connecting five stops all together. You can get on the Marmary from Sirkeci on the European side, which is a two-minute walk from the Eminönü docks or from Üsküdar on the Asian side, which is five minutes away from Kadıköy. This fast and exciting way of traveling has made it easier for people looking to avoid the traffic on the bridges.

The metrobus, which has its own special lane closed to public traffic, is also an ideal form of travel. It whizzes through the city even when normal traffic is bumper to bumper. There are eight different metrobus lines that spread out in all directions throughout the city, but the most used lines are the ones that connect the two sides of Istanbul. These lines travel over the Bosphorus Bridge, giving their passengers a magnificent view.
Last but not least, is the most common form of transportation around the city and the one that covers the most areas - the bus. It is no surprise that a city this big needs many forms of transportation, but buses are the most commonly-used. The city's buses come in all different colors, which mean different things. Green means they are environmentally friendly, yellow means they are furnished specially for disabled people and turquoise means they are run by private companies. Buses are referred to with a number or letters, and usually both, in accordance to their travel route, which is clearly visible on the front of the bus. Bus stops have a list of buses that stop there and where they go, making it easy for people who might be unfamiliar with the city and to find the bus they need.

Istanbul can be a difficult city to live in, but these forms of transport make life much easier. If you are having trouble finding a form of public transportation near you, visit the government website at www.iett.gov.tr/en
Last Update: Apr 22, 2015 5:45 pm
RELATED TOPICS