The empire's lost present and future 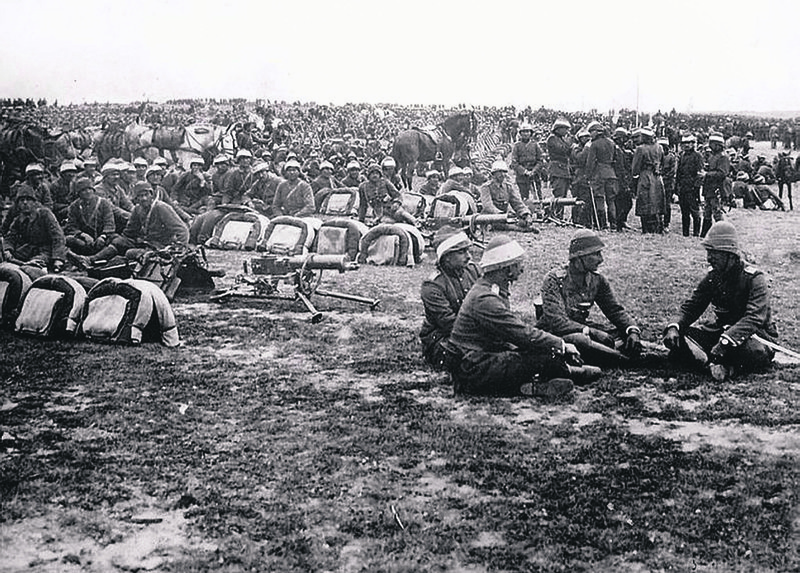 The Ottoman Empire did not just lose WWI, it also lost most of its qualified and educated subjects in battle. It led to irreparable consequences for the following decades as the overthrown Sultan Abdülhamid II proclaimed, ‘The apple of my eye is gone!' in reference to an entire lost generation

Rumor has it that when the outbreak of World War I was reported to Ottoman Sultan Abdülhamid II, who was in exile at Beylerbeyi Palace at the time, his first words were: "Alas, the apple of my eye is gone!"

The intellectual Turkish youth, the apples of the Sultan's eye, were the most qualified human resource of the Ottoman Empire – all well-educated and intellectually equipped, which were particularly important for a bright future of the Empire.

"The will of Sultan Abdülhamid II was to keep his people alive by providing an era without war and to keep the prolific human resources fountain flowing because as long as wars continued, the meeting of the fathers and their sons or the meeting of the grandfathers and their grandsons would be impossible. And as a consequence, the process of creating a healthy society would not be possible demographically first and foremost," said Mustafa Armağan, the historian in his book "Yakın Tarihin Kara Delikleri" (Black Holes of Recent History). During his 30 year-reign, Abdülhamid II managed to preserve this generational human chain, thus there was an increase in the population. This new dynamic generation was educated in modern schools, and in the wake of this process, a qualified power needed for the running of a modern state was acquired.

Armağan highlighted that the educational gap between the Muslim deputies and the non-Muslim deputies of the parliament was much narrower in 1909 compared to 1877. The cadre that would take the responsibility of the state was ready finally.

Herbert Hoover once said, "Older men declare war, but it is the youth that must fight and die." When World War I broke out, three statesmen of the İttihad and Terakki cabinet (The Committee of Union and Progress) went to war. The majority of the qualified youth, the apple of the Sultan's eye and the bright cadre of the future of Turkey, were lost at the Battle of Gallipoli.

"We sacrificed ourselves for two ships [the Goeben and the Breslau]. It is unreasonable to go to war against three strong countries. I am uneasy about the fatal consequences. This is insane!" said Abdülhamid II in his daughter's memoir "My father Abdülhamid."

"It seems that during those years, no one understood better than Sultan Abdülhamid II just how little the country would gain and how much more it would lose in the war. İttihad and Terakki put the Sultan's hopes and ambitions towards the future, the richness of the oil fields of Mesopotamia and the leadership of the Islamic world at risk by taking on a crazy gamble. The most merciful God saved him from witnessing the war ships of the allied states that lay anchored in the Golden Horn just nine months after his passing," said Joan Haslip in "The Sultan: The Life of Abdülhamid."

Sultan Abdülhamid II attaching importance to education had exempted all students from military service in 1892, but due to the need for more soldiers to be deployed at the front, the exemption right was repealed in 1914 with the passage of a new law. Following this was a declaration of general mobilization of each and every man between the ages of 20 and 45, including university students, who were called to arms. With the increasing number of battlefronts, so many students from high schools and even from secondary schools mobilized for the defense of their homeland.

In his memoir "Cepheden Cepheye," Münim Mustafa, who was a student at the Mekteb-i Harbiye (Istanbul University) Faculty of Law during WWI, said: "I was young and at school age … I had no other goal than studying at law school. I was from a wealthy family. My father was a doctor. When the mobilization was declared on July 21, 1914, I stopped studying and went into military service. I can never forget those days. All the intellectual Turkish youth of Mekteb-i Harbiye was running to military training with great eagerness, with such excitement."

Another anecdote is from Ahmet İhsan Tokgöz in his memoir "Matbuat Hatıralarım." "Some of my dear students who could escape from WWI's clutches today have obtained good positions in our economic and commercial life. Whenever I see them, I feel very proud of them and feel grieved for my students who were killed in action. Such heartbreak that the war mowed the lawn with our qualified youth," he wrote.

In the final analysis, the Ottoman Empire lost about 250,000 people in the Battle of Gallipoli alone. It was a huge loss that impacted the next generation. Once you think of the quality and the quantity of people who died during the War of Independence later, one can easily understand how it affected a nation in a negative way from the economy and agriculture to education and health as well as from the loss of the students from the teaching departments, medical faculties, law schools and others in the process of founding a new state in following years."We deeply felt the burden of the casualties we suffered in the battles in Çanakkale on each and every front during the following three years of the war. We also suffered from a lack of qualified members of our generation after the war," said İsmet İnönü, commenting on the negative effects of the absence of the intellectual youth in the memoir "İsmet İnönü'nün Hatıraları," written by Sabahattin Selek.

2015 marks the 100th anniversary of the Çanakkale victory against the Allied forces, which saw a great epic written by thousands of brave men. The Battle of Gallipoli was an unprecedented victory in world history, and a new nation was born from the ashes of a failing empire. If it had not been for the victory in Çanakkale, there would be no Turkey today – even though an entire generations most talented and qualified individuals were lost there.

"We buried a Darülfünun (class of students at an Ottoman university) in Çanakkale," was such a fitting simile from Mustafa Kemal Atatürk, the founder of Turkish Republic and one of the greatest commanders of the battle.

In a nutshell, Turkey had to pay the price for the defense of its homeland and independence by sacrificing the casualties in Çanakkale. But besides the military and political effects of a war, there are other factors we should never ignore such as cultural, economic, social and educational issues that have a strong, long-term impact on society. It is always good to know what we have gained and lost so that we can learn lessons from history, especially if we want to take firm steps forward with the great potential of human resources our country has today.I will conclude this article with a quote by the military historian and British general, Aspinal Oglander in "The Impact of the Dardanelles (Çanakkale) Wars on Educatıon: The Case of Karesi Secondary and High Schools" by Karabük Unıversity academic Cemile Şahin: "We might have lost the Battle of Gallipoli but the biggest gain of this war is bereaving the enlightened youth of Turkey, thereby its future."

Respect to all the soldiers who devoted their hopes, dreams and lives to the survival of this country for us and future generations during World War I.
Last Update: Apr 22, 2015 9:57 pm
RELATED TOPICS