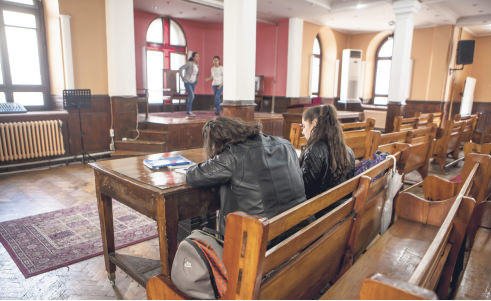 Political disputes between Armenia and Turkey mostly based on the 1915 events continue. On the other side of the coin, about 100,000 Armenian illegally migrants in Turkey are more focused on their economic problems than politics and are optimistic about Turkish nation's attitude toward them

On the centennial of the 1915 events, the whole world has fixed its attention on the incidents, some labeling them genocide, prompting harsh responses from Turkish officials. Amid these disputes between states and leaders, Armenian immigrants who live illegally in Turkey only hope for peace between Armenia and their adopted home Turkey. Armenian migrants in Turkey live and work around Kumkapı, Samatya and Kurtuluş districts of Istanbul.

Despite the conflict between the two countries, many of them are quite happy to live in Turkey and optimistic about the current government's attitude toward them.

President Recep Tayyip Erdoğan said last week that Turkey has around 100,000 Armenians, underlining the government is aware of illegal workers, but is doing its best to meet their needs. The children of illegal workers in particular, who do not have the opportunity to register at a school and have been receiving poor education, have been on the agenda since last year. Regardless of the relations between the two governments, Turkey attaches particular importance to the children. 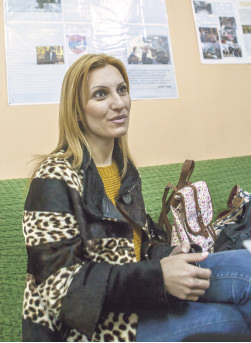 Arriving here 13 years ago, a woman named Heriknaz Avagyan is one of around 100,000 Armenians living in Turkey. After getting married to a Turkish citizen of Armenian origin, she was eligible for citizenship. She said her heart was full of fear of and hatred for Turks at the beginning.

"When I was heading to Turkey, I was full of hatred and fear of Turks. I was young and easily affected by what I had been told up to that time. However, when I started to live here and meet Turks, my thoughts completely changed. I realized that hatred was no good, nor was judging people based on their nations. Besides, there is no point in blaming Turks now for what happened 100 years ago," she said.

Most Armenians come to Turkey because of economic problems in Armenia. Even after graduating from a reputable university, they have difficulty finding a financially satisfying job. The fact that Turkey has a more stable economy and is not far away from Armenia, and if there are already relatives living here it makes Turkey appealing for Armenian migrants.

Avagyan said the number of illegal Armenian workers is quite high. Even though the Armenian community in Turkey and their Turkish neighbors try to help them, there are still problems that remain unsolved.

"It is not easy to illegally live in a country. Their children cannot go to school, they do not have health insurance and they all live on shaky ground. They are quite contented, though," she said.

Eight out of 10 Armenians to whom Daily Sabah talked said they did not face any harassment for being Armenian in Turkey. Quite the contrary, some said they are treated warmly by people who are curious about Armenian culture.

An anonymous woman, the wife of an illegal worker, said she was afraid to come to Turkey at first, but then realized the only challenge was language.

"I feel like I live in my homeland. We can earn money and we have great friends. Well, we still have some problems, but this is the best possible way," she said. She added that Turkish TV series helped her learn Turkish the most.

Many Armenians also try to maintain their culture, especially at home. All of the workers who Daily Sabah had the opportunity to speak with said they speak Armenian at home, celebrate their feasts and cook traditional food at least twice a week.

A 40-year-old illegal worker who works in a shoe factory, said: "I do not think it is right to impose a certain idea in our children's minds. Of course I try my best to maintain our culture and to tell them about our origins, but I do not allow anyone to impose something in their minds that will bring controversy. I feel really happy when I see my children playing with their Turkish friends and speaking Turkish fluently."

Another 33-year-old woman who is also an illegal worker said: "I want my child to read, learn and decide what happened 100 years ago by himself. I and my husband always avoid bad remarks concerning Turkey. However, regardless of our increasing efforts, we cannot stop it. Last week my son told me that he hates the Azerbaijani flag as they are the enemies of Armenians. I just cannot accept it. Our children should get rid of these kinds of thoughts and strengthen peaceful relations, especially with Turks, with whom we have been living together for years."

The woman, who has been living in Turkey for 10 years, said almost all Armenians are aware of what has changed over the last 10 years: "No country is absolutely perfect, but it is an undeniable truth that Turkey has witnessed considerable changes in the last 10 years. When I first came here, both people and the state had a harsher attitude toward Armenians. We were even afraid to use the word Armenian. I have many Kurdish friends who say the same thing. Now we do not hide our identity, we can practice our culture and demand our rights from the government easily. I believe complete peace will come soon and the AK Party [Justice and Development Party] government will do its best to establish peace between Turkey and Armenia."

She said she appreciates how Turkey has come a long way in attitudes toward minorities in the country. 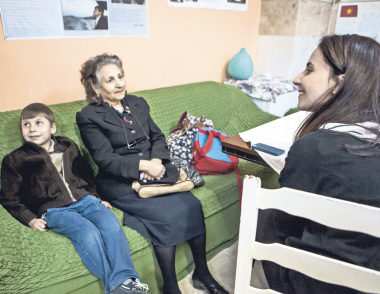 The Armenian woman comes to school, which is located inside the church, to take her grandson home.

A grandmother who has three grandsons studying in an Armenian school, which is not registered, but continues its existence in a basement of a church, said she came to Turkey with her family due to financial problems. She has been here for 13 years and has not been back to Armenia since.

"It is not easy to live here like this. Imagine, I am an old woman and I sometimes need to see a doctor. However, I do not have health insurance. I can go to a hospital only twice a year as even a medical analysis costs around TL 400 [$147]. How can my sons provide money for that? I am really sick, but I cannot be treated."

Most workers do not want to go back to Armenia, but they have to think of their children. As the school under the church only has eight grades, children cannot continue their education. Even though they say they are financially satisfied in Turkey, they would have to go back to Armenia one day for the children's education.

According to Armenian teachers, there are around 3,000 Armenian children, most of whom are unregistered and have to continue their education in less-than-adequate circumstances.

Another woman came to Turkey with her two children after leaving her husband to live with her parents. She is not currently working, but knows many illegal workers. 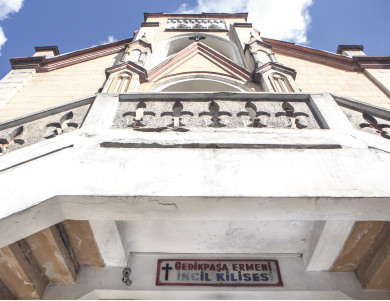 "I was never afraid of coming to Turkey. Why should I be? Every nation has good and bad people, and I never encountered any insult for being an Armenian. I can go to church, say that I am Armenian and visit my Turkish friends' houses. Even though I came here one year ago, I have heard that many things changed in the last 10 years. Recep Tayyip Erdoğan said several days ago that the government makes great efforts to solve the problems of illegal Armenian workers. I believe the Armenian candidates in the party will have influence in solving this problem," she said.

Almost all of the workers want to have work permits and live in Turkey. They are optimistic about the current government's steps regarding Armenian migrants in Turkey, but they believe both sides should be united and should do their share to overcome the ongoing dispute.

According to a 2009 report by investigative writer Alin Ozinian called "Illegal Armenian workers in Turkey," the 1998 earthquake and difficult economic condition in Armenia have increased the number of migrants coming to Turkey. Women comprise 96 percent of migrants employed in house cleaning, caregiving and sales. Their monthly income ranges between $500 to $1,000. The report also revealed that many workers said that their Armenian-origin bosses treated them worse than Turkish bosses did. They also say they are criticized in Armenia, too, for living in Turkey.
Last Update: Apr 25, 2015 1:33 am
RELATED TOPICS