The mosque that stands on the sea: Kılıç Ali Pasha Mosque 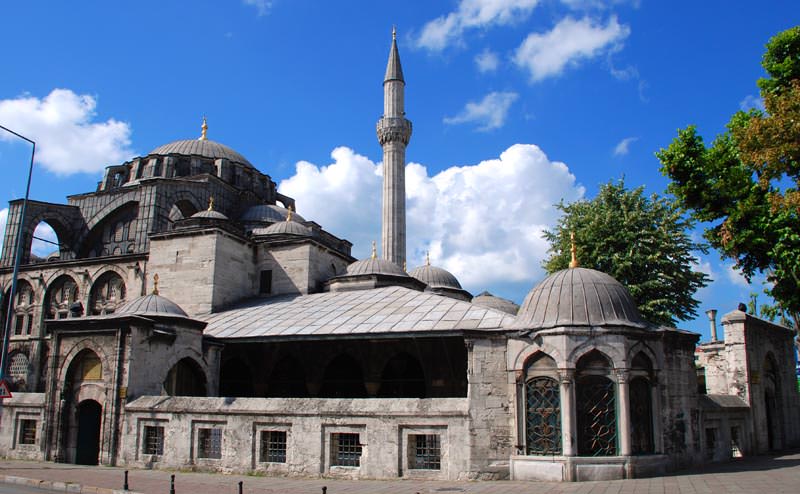 The Kılıç Ali Pasha Mosque is a beautiful structure that decorates the Bosporus on the Tophane Pier on Istanbul’s European side. It was built by Mimar Sinan by filling the sea with rocks, and was named after Kılıç Ali Pasha, one of the most prominent figures in Ottoman maritime history

The great Ottoman mariner Kılıç Ali Pasha, who is also known as Occhiali in Europe and earlier as Uluç Ali Reis, wanted to build a mosque in order to be remembered for his charitable works. He entered the sultan's presence and stated his wish. The sultan made a joke in response, saying: "You are the captain of the seas. Go and build your mosque on the sea." Inspired, the admiral went away and built a mosque without historical precedent.

A beautiful and magnificent mosque stands among the other monuments decorating the Bosporus on the Tophane Pier on the European side of Istanbul. This mosque, which many people pass by every day without even knowing its name, is the Kılıç Ali Pasha Mosque. It is a building that holds an important place in our cultural history with its legends as well as its architectural beauty. The well-known architect during reign of the Süleyman the Magnificent, Mimar Sinan, built three beautiful mosques for three admirals-in-chief along the same coastline. The others are the Piyale Pasha Mosque in Kasımpaşa and Sinan Pasha Mosque in Beşiktaş.

Without a doubt, Kılıç Ali Pasha was one of the brightest figures of Ottoman maritime history. He is not only considered one of the greatest mariners in the Ottoman Empire, but also around the world. According to a story, his parents were Turkmens living on the coastline of Aydın. He was kidnapped by the Knights of Saint John and taken to Italy. Kılıç Ali Pasha grew up as a servant of an Italian nobleman living in the town of Le Castella in Calabria, and was given the name Guilio Galeni. At the age of 11, he was sent to Naples to study at a denominational school. On his way there he was taken prisoner by Muslim Algerian navy seals. The commander, Ali Ahmed Reis, took the boy with him after he learned his story.

From this point on, he was called by a third name, Uluç Ali, which is a variation of the Italian name Guilio. Rumor has it that Uluç was a name given to pirates not of Arab decedent. Some say that he was of Italian origin, rather than Turkish. But whatever his origin, Uluç Ali was raised according to Turkish-Islamic upbringing within the Ottoman community and became one of the most famous mariners in the world. European historians referred to him as Occhiali.

He stood out for his intelligence, talent and physique and he never let down those who relied on him. He trained under the care of Barbarossa Khair ad-Din Pasha, who was another famous mariner living during the reign of Süleyman the Magnificent. Uluç Ali proved himself in maritime affairs and devoted his life to the service of the empire. He won many victories and had his name written in gold letters in history and remained undefeated in his life. His conquest of Tunisia, a huge country, by defeating the Spaniards, was his biggest success.

The Ottoman navy was defeated for the first time in 1571 by the allied fleet of the Papacy, Malta, Venice and Spain. During the battle, 152 ships were lost. Thousands of soldiers were martyred and injured. Even the admiral in chief was martyred. Kılıç Ali Pasha succeeded in saving all the ships that he commanded during the battle without a single casualty. Moreover, he was able to destroy the Maltese fleet, which formed the left wing of the enemy forces. He informed Sultan Selim II in Edirne about the defeat. Due to his success in naval warfare, he was promoted to admiral-in-chief of the Ottoman navy, a position he held for 16 years. His nickname was converted into Kılıç, and Uluç Ali Reis became Kılıç Ali Pasha.

He outlived several Ottoman sultans, and managed to successfully rebuild the Ottoman fleet that had been destroyed in Lepanto in modern-day Greece, then known as İnebahtı, in a very short time. Building huge war ships, he ensured that the OttomanNavy continued to be the strongest fleet in the world even a century after his death.

Kılıç Ali Pasha was not only known for his successes in history, but also for his charitable works. The elegant, magnificent and namesake külliye – an Islamic social complex – still stands in Istanbul. Thus, the name of the heroic Ottoman mariner is immortalized in the külliye.

Le Castella town in Italy, whose shores had been visited by Turkish sailors frequently, takes pride in the Great Sailor by erecting a sculpture of Kılıç Ali Pasha which was made by sculptor di Dinami.

When the great Ottoman mariner Kılıç Ali Pasha grew old, he wanted to leave a monument that would preserve his legacy. He decided on a mosque featuring a public bath and madrasah. He was the admiral-in-chief, one of the highest offices in the Ottoman Empire, but he had developed a habit of not doing anything without asking the sultan first, just like any other public officer. And so, he appeared before Sultan Murad III and declared his wish. When his proposal was approved by the sultan, he asked where he should build the mosque and the sultan made a joke, saying, "You are the commander of the seas. I will not give you even a small piece of land. Go and build you mosque on the sea." Kılıç Ali Pasha said, "Aye aye," and asked for permission to leave. He had a meeting with Architect Sinan and told him that the mosque would be built on the sea.

Even though the sultan sent word and said, "I was just joking, he can build his mosque wherever he wants. There is no need for this much trouble," the Pasha did not back down following the first order of the sultan. "A word once spoken is past recalling. It is not possible for me not to follow it because God makes the rulers speak," thought Kılıç Ali. Upon this, Architect Sinan filled the sea near the Tophane coast with rocks. The construction of the Kılıç Ali Pasha Mosque along with its madrasah, public bath and public fountain, which still stand in all their glory and elegance today, was finished in 1580. There was also a valuable library in the madrasah.

Another interesting feature of the mosque is that there are rumors that the famous Spanish novelist Cervantes, author of "Don Quixote" worked on the construction of this mosque during his enslavement. He was a soldier in the fleet of the Crusaders. When returning from the Battle of Lepanto, the galiot he was in was surrounded by the Ottoman fleet in 1575. Cervantes was captured by Kılıç Ali Pasha and even lost one of his hands during the battle. He was bought by an Algerian as a slave and was put to work in the construction of the mosque for a few years in Istanbul, after which he was set free and returned to Spain. In his novels he describes his days in captivity.

There are two semi-domes on one side of the dome of the Kılıç Ali Pasha Mosque and an arch and retaining wall on the other side. It resembles the Hagia Sophia, however it is more spacious, more beautiful, and brighter. The İznik tiles featured in the mihrab are very beautiful. During the Ottoman period, nobody, even grand viziers, could build a mosque with two minarets, as this privilege was the sultan's alone. Hence, the Kılıç Ali Pasha Mosque has only one minaret and its dome is smaller than mosques built by sultans.

It was believed that those who performed their morning prayers 40 days in a row at the Kılıç Ali Pasha Mosque would see Khidr, a mystical righteous servant of God possessing great wisdom or mystic knowledge who is mentioned in Quran. People used to flock to the mosque due to this belief.

The pasha lived seven more years after the mosque was built. Until his death, he prayed in this mosque and took care of the students in the madrasah. One morning, he prayed in the mosque and returned to his home after handing out alms and receiving people's prayers. He became sick and died. His tomb is near the mosque that was named after him. In the following year, Architect Sinan also passed away.
Last Update: May 07, 2015 10:24 pm
RELATED TOPICS