From gasworks to a thriving community 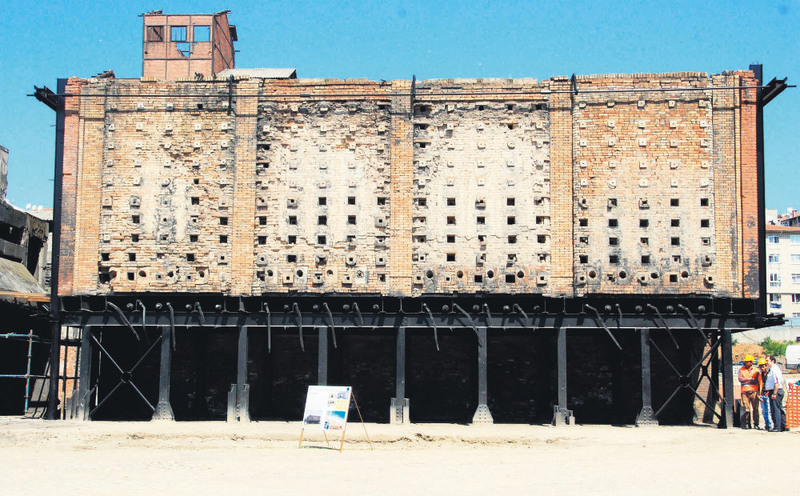 Hasanpaşa Gazhanesi is one of the oldest industrial facilities on the Asian side of Istanbul, which was established to illuminate the prominent streets of the city. It is now being renovated to turn it into an industrial museum as well as spaces for cultural activities, workshops, seminars and artwork

One sunny morning last week I went to a part of Kadıköy that I had never been to. Like so many urban legends, I had heard of this place, but had never seen it – at least not until that morning.

As I walked through the gates to the Hasanpaşa Gazhanesi (gasworks), I heard music and saw a number of people standing around. What I had expected from a gasworks was not this. True, I had heard so much about the Hasanpaşa Gazhanesi over the years; I had heard about how it had been abandoned to its fate in the 1990s and how it had become a derelict ruin of a place, attracting all sorts of undesirable people. But on that day, a modest – but happy – crowd had gathered in front of a temporary stage. On stage was a dance group displaying their skills, accompanying the lively music, reminding us that May 6 is Hıdrellez. But the people had not come for the music, nor for the show, nor to stand in the sun; they had come to witness a historical moment.

The buildings behind the stage told the story. They ranged from some that were in almost a total state of collapse, while others had grass growing out the second floor windows. Still other buildings appeared to be only in need of a new pane of glass or two to start functioning again.

The Hasanpaşa Gazhanesi was originally built to produce coal gas, as its name suggests. Coal gas was first produced in Britain at the end of the 18th century to light lamps (particularly in large mansions) and for industrial processes that required gas as a fuel. Gasworks were built so that coal could be burned to produce the gas. Most gasworks would be located next to a river or a canal, as it was then easier to bring the coal to the facility. They were also usually built in poor areas, as the smell that emitted from the burning of the coal and the creation of the gas was not always pleasant.

Coal gas first started to be used in the Ottoman Empire during the reign of Sultan Abdülmecid; the sultan introduced coal-gas to illuminate Dolmabahçe Palace. The gasworks produced more gas than the palace could use, so it was distributed to illuminate İstiklal Avenue and then the areas of Galata and Pera. This was followed by the construction of another gasworks in Yedikule in 1880. There were a total of five gasworks in Istanbul at the turn of the century, all of which made coal gas to provide fuel for domestic and industrial purposes. These five gasworks were the Hasanpaşa Gazehanesi, Poligon Gazehanesi, Yedikule Gazehanesi, Dolmabahçe Gazehanesi and Kuzguncuk Gazehanesi.

The production and use of coal gas on the Anatolian side of Istanbul began with the desire to illuminate Beylerbeyi Palace; the first gasworks on this side was that established in Kuzguncuk in 1865. But this facility soon proved to be insufficient to meet demand and in 1891 the Kadıköy Hasanpaşa Gazhanesi was established. The Hasanpaşa Gazhanesi is one of the oldest industrial facilities on the Anatolian side of Istanbul

From the years in which it was built until this time the Hasanpaşa Gazhanesi had been used as a coal-gas production factory, a coal depot, a bus garage and a bus depot. In the final years it was inhabited by vagrants and drug dealers, who used this area as a home base, and who posed a real threat to the tranquility of the neighborhood.

In 1996 the residents of Hasanpaşa came together with members from trade associations and carried out a study on how this area could best be put to use. As a result, it was suggested that Hasanpaşa Gazhanesi be redeveloped as a cultural center and green-belt. After talks with Istanbul Metropolitan Council and the drawing up of a detailed report it was decided that this area should be protected. In the same year the decision to renovate the Hasanpaşa Gazhanesi so that it could transformed into a cultural center was taken.

This was a very important decision as such a transformation would be of benefit to the entire area and bring new life and culture into the area. Kadıköy is a region that is in sore need of such areas; there are very few places where people can gather and come together to learn new skills and develop existing skills free of charge here.

But the gasworks are not just something that hold a promise of the future; they reflect something important from the past. They are not just old derelict buildings full of rusting equipment, covering valuable land for development; rather they are reminders of technology from a bygone era. It is this fact that has led Istanbul Metropolitan City Council to carry out such an ambitious development here. Also, the fact that the Hasanpaşa Gazhanesi was operating as late as 1993 means that it is still fresh in people's memory.

The extensive Hasanpaşa Gazhanesi Project, which is being conducted by Gürsoygrup may be a first in Turkey, but it is working on a strong and important tradition. The transformation of gasworks into industrial museums or parks is something that has happened in a number of countries. Gasworks have been used for these purposes in a number of countries, including Australia, Britain, Greece, the United States, Poland and New Zealand.

But the Hasanpaşa Gazhanesi will be different. Here, not only do the plans include a museum, but there will also be an exploratory learning center/playground for children as well as classrooms for cultural activities and artwork.

The ambitious plans include a restaurant and a couple of cafes, where people can chat, eat and relax. There will be classrooms and art studios for teaching crafts and developing new skills. The Hasanpaşa Gazhanesi will also include an International Exhibition Hall, a multipurpose exhibition center, a viewing terrace, a 3-D cinema and a number of other exhibition spaces, as well as an open air market place, an energy systems museum, an information tunnel and an industrial structures institute. This is not the extent of the plans, but if the reader is interested, they can go to Hasanpaşa and view the plans for themselves. In short, as we can see, the gasworks are being transformed into a center that will answer the needs of many and will breathe new life into an area that is in need of such revival.

This revival is not what some people are referring to these days as "gentrification." This is urban renewal in its purest form. No one is tearing down residences to make more expensive houses for wealthier people. The area will not remove the poorer populace to make way for the better off. That is not the policy of the current Turkish government. What is happening here is that a dangerous space, full of derelict buildings – some on the verge of collapse – is being renovated in such a way that it reflects their past, while instilling new life into the area. The local residents will be the direct beneficiaries, and employment, investment and skills will all come flooding into the area.

This is a project that brings hope to a barren area. Rather than brown dried grass sticking out of the broken panes of the gasworks buildings, there will be art, culture, tranquility and a community spirit emanating throughout the surrounding area.
Last Update: May 08, 2015 11:14 pm
RELATED TOPICS