Pianist looks to Syria's musical past to spread peace 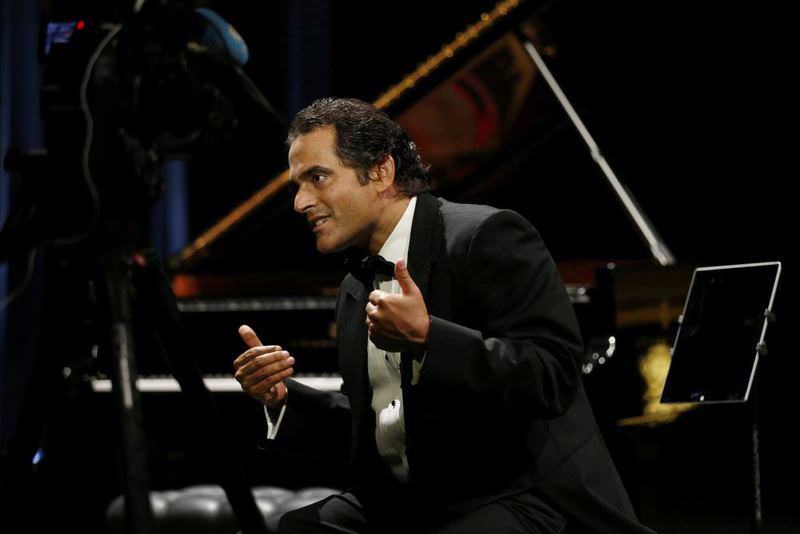 Malek Jandali may only have been alive for four decades, but the award-winning composer insists he feels ancient, having revived some of the oldest melodies from his war-torn Syrian homeland.

"I'm 8,000 years old," the pianist said, in the middle of a world tour he hopes will spread "peace and freedom" three years after leaving Syria just as war was tearing it apart. A winner of the 2014 Global Music Awards gold medal, Jandali has for years sought to uncover ancient melodies for modern audiences, but says he is now focused on the future, both in terms of composition and for the land of his upbringing.

Born in Germany, Jandali grew up in the central Syrian city of Homs, once dubbed the "capital of the revolution" by activists, before winning a scholarship to study in the U.S. Soon after Syria's uprising started in March 2011, the 42-year-old pianist and composer performed at a demonstration in front of the White House.

His initiative prompted pro-regime armed groups to attack his elderly parents in their home in Homs. They later fled to the United States. Jandali said it was this attack that helped him discover "the soft power of music." "The Syrian people are paying a very heavy price," he told Agence France-Presse (AFP) in Dubai during a tour stopover. Jandali is aware that music alone can do little to alter the situation on the ground, but "it's raising much-needed humanitarian aid and much-needed awareness".

His latest album, "Syrian Symphony," released in January, contains melodies inspired by the chants of the Syrian people during their protests against President Bashar Assad's regime. "I was always trying to ... involve my own Syrian identity that is now being targeted ... destroyed," he said. "My duty as an artist is to preserve and present it in the most elegant way. I don't comprehend politics or religion," he said with a twinkle in his intense, brown eyes. "My message is of peace, unity, humanity and justice."

Although he is accompanied by Syrian oud player Abdulrahim Alsiadi and American cellist Laura Metcalf, Jandali still complains about restrictions imposed due to the political climate at some venues. "During my world tour, I faced many disturbing incidents of censorship, such as deleting the word 'free' from my [tour] title: Voice of the Free Syrian Children, in some countries," he said. The tour itself was inspired by children Jandali met after he illegally crossed into his country in 2012 – his last time in Syria.

Before the war, Jandali's career often drew on historical compositions of his homeland. His 2008 album "Echoes from Ugarit" includes melodies based on "the oldest musical notation in the world" discovered on a clay tablet in the ruins of Ugarit. "We wouldn't have had Lady Gaga or Michael Jackson or even Beethoven without the musical notations of Ugarit," he said.

His award-winning work, "Emessa," was played at the funeral of American war reporter Marie Colvin who was killed in the Syrian army shelling of Homs in 2012. "I went to the church and I heard my music, the music of Homs," played at the funeral. "I still get goose bumps." When asked about extremist organizations that have emerged in Syria's civil war, such as the jihadist Islamic State of Iraq and al-Sham (ISIS), Jandali insisted that "the Syrian people have throughout history, and even today, embraced all religions and all cultures. "We have synagogues, we have the oldest churches on earth where you can still hear prayers in Aramaic."

Among the tracks on his latest album is "Samai al-Nahawand," written by 19th century scholar Sheikh Ali al-Darwish. "This is the true Syrian sheikh, who was a composer spreading music and documenting and preserving his rich Syrian identity through music," he said. For Jandali, Darwish represents the "real" message of Islam – "peace."

Despite the war that has cost more than 220,000 lives, Jandali still sees "a much more beautiful Syria" in the future. "What we are seeing today is the rebirth of Syrian identity," Jandali said. "People are dancing, funerals are becoming weddings, people are celebrating heroes rather than mourning them." While he "loves" his U.S. citizenship and the freedoms that come with it, he remains rooted both emotionally and through his work in Syria. "My memories, my grandfather's grave, my home. I live in Homs," he said. "I know they kicked us out, I know they destroyed my home. I know they are trying to eradicate my true cultural identity, but we are becoming a much more beautiful Syrian symphony today."
Last Update: May 20, 2015 10:36 pm
RELATED TOPICS