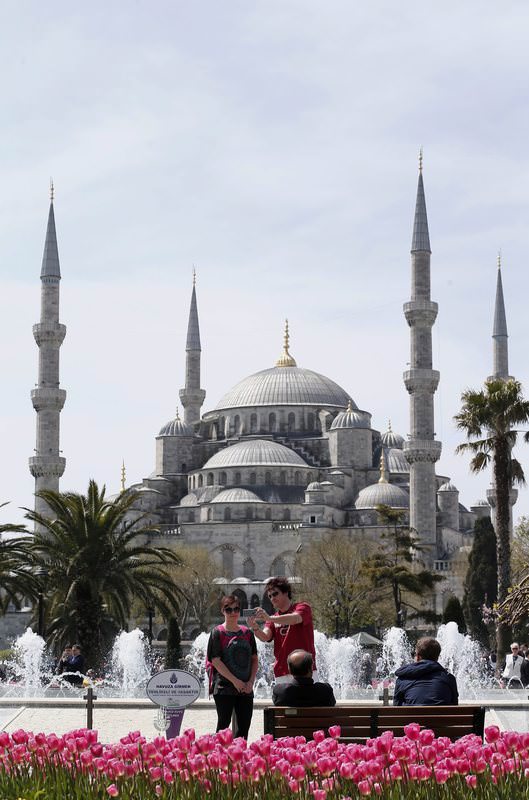 As one of the world's top cities in terms of tourism, Istanbul fails to compete with Barcelona, London and Paris regarding tourists' visit time. To remedy the situation, new regulations will enable more space to be provided for tourist facilities

Istanbul is one of the cities in the world that attracts a massive amount of tourists. Even still, a new step will be taken to increase Istanbul's tourism potential. According to a decision by the Istanbul Metropolitan Municipality, new regulations will be made in the construction plans of hotels and other tourist facilities to prolong the duration of tourist visits to Istanbul similar to those in Barcelona, London and Paris.

The Directorate of City Planning sent a letter to the Istanbul Metropolitan Municipality City Council and underlined that tourists do not spend much time in the city, although Istanbul hosts millions of tourists every year, and said that they need to offer extra opportunities to tourists to turn Istanbul into a center of attraction. They demanded that the City Council make the necessary regulations to expand the duration of tourists' visits. Upon the demand of the Istanbul Metropolitan Municipality Directorate of City Planning, communal areas such as congress halls, exhibition venues, swimming pools, ballrooms, sports centers and dining halls will be built apart from the original construction plan of hotels and other tourist facilities, enabling the accommodation building to have more space for rooms. If the contracting company or the owners of hotels want to build new facilities in their complexes, they will be able to build them apart from the main building with the encouragement of the municipality. Thanks to these advantages, which will lead to the improvement of hotel comfort and the quality of communal areas, these places will be more available to and accessible by tourists. The Istanbul Metropolitan Municipality City Council also agreed that this new regulation should include private hospitals, private schools and private cultural centers. From now on, administrative sciences, intensive care units, operating rooms, dining halls, cleaning and maintenance units, meeting and conference halls, libraries, swimming pools, morgues and prayer rooms will be able to be omitted from building construction plans.

This new regulation should provide many commercial advantages to Istanbul. Tourists will be encouraged to spend more time in the city and they will be offered more comfortable accommodations as well as entertainment areas.

Although millions of tourists come to Istanbul every year, the duration of their accommodation is approximately 2.4 days, while it is seven days in London, 5.5 days in Paris and 3.6 days in Barcelona. To increase the duration of their visits, tourists should be offered more opportunities in the city in addition to sightseeing and touring historical places. The Directorate of City Planning underscored that new strategies should be brought forward if they want a boost in hotel occupancy rates. By separating spas, swimming pools, dining and conference halls, ballrooms and congress centers from the original plans and construction of hotels, the new regulation intends to strengthen competition among hotels, as it will become easy for tourists to use communal areas. Also, the Public Works Commission of the Istanbul Metropolitan Municipality has decided that private health facilities and private education institutions should benefit from the regulation. According to the regulation, ballrooms, spas, dining halls and other communal areas in the first and second floor basements as well as mandatory units, such as morgues, operation rooms and intensive care units, will not be included in building plans.

The number of visitors to Turkey's commercial and cultural hub, Istanbul, was 11.6 million in 2014, according to the Master Card Global Destination Cities Index, beating cities like Barcelona, Rome and Tokyo. Turkey's largest city has shown strong growth in international visitor arrival numbers after welcoming 11.6 million tourists in 2014, a report claims.

Rounding out the top five cities are London, Bangkok, Paris, Singapore and Dubai, which benefit not only from a flock of international travelers and an expanding middle class, but also from innovations in luxury. According to a Turkish Statistical Institute report for the first quarter of 2014, tourism revenue reached $4.8 billion (TL10.2 billion) across Turkey, an increase of 3.4 percent compared to the same period of 2013, with 76.2 percent of tourism revenue coming from foreign visitors. Foreign tourists spent an average of $877 each during the first three months of 2014. The Master Card Index ranks cities in terms of the number of their total international arrivals and the cross-border spending by these same visitors in destination cities.
Last Update: May 27, 2015 11:04 pm
RELATED TOPICS