As participation rates rise, the importance of overseas votes increase 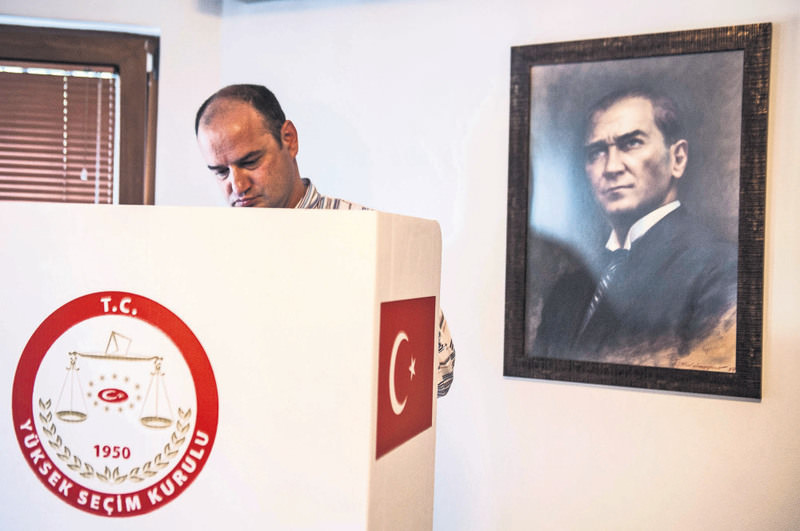 A Turkish citizen living in Kosovo casts his ballot for the upcoming Turkish general elections at the Turkish embassy in Pristina on May 31, 2015.
by Turhan Özen Jun 06, 2015 12:00 am

More than 1 million Turkish citizens living abroad have voted in the upcoming June 7 elections. Parties have been generous in their pledges, as they make promises like introducing overseas members of Parliament, reducing fees for an exemption from military duty and reducing passport fees

The U.K.'s Turkish community went to the polls again this weekend, only this time to select members of Parliament in Turkey. The polling day in Turkey is June 7, and with the recent changes to the election law, the overseas electorate can vote at designated areas in their countries of residence. Of the 53 million people eligible to vote, 2.8 million overseas voters living in 54 different countries have the power to elect 28 of the 550 members of Parliament.

This significance has attracted a great deal of campaigning. From street stalls to house visits, a variety of activities have taken place. Almost every week, a public meeting was held in which a high-profile Turkish politician was hosted. Turkish political parties have also been very generous in their pledges to overseas voters, including such promises as:

A reduction in fees for an exemption from military duty

A reduction in passport fees

Lifting restrictions on using cars not registered in Turkey

A reduction in the price of flight tickets for two

The introduction of those overseas as members of Parliament

In last year's presidential election, turnout was less than 10 percent among overseas voters. A total of 62.3 percent of votes went to the Justice and Development Party (AK Party), with the coalition consisting of the Republican People's Party (CHP), Nationalist Movement Party (MHP) and four smaller parties receiving 27.9 percent of the vote and Democratic Peoples' Party (HDP) receiving 9.8 percent. The turnout is expected to be higher this time, but the distribution of votes is predicted to be similar.

While this election is very important for the AK Party and the HDP, it will not change much for the CHP or MHP. The AK Party has been increasing its number of votes with every election since 2002. One the main planks of its current campaign's platform is the introduction of a presidential system. The party will introduce this if it manages to win the necessary 330 seats. The HDP is taking part in the parliamentary elections for the first time as a party, but there are doubts about whether or not it will be able to pass the 10 percent national election threshold to be allowed in Parliament. In the past, HDP candidates ran as independents in order to avoid this stumbling block. If the HDP surpasses the 10 percent mark, they will increase their seats from 29 to at least 50.

I took a short trip to Belgium the weekend after the U.K. elections where I was invited to a rally held by President Recep Tayyip Erdoğan in Hasselt. It was fantastic to run into my Belgian political colleagues, but I was envious of the love the people demonstrated for Erdoğan. I think any of my British colleagues who might experience the atmosphere of these rallies would feel the same pang of envy. More than 15,000 people were packed into a hall, singing songs about Erdoğan for four hours until he arrived, and no one complained about the long wait either. When Erdoğan finally came on stage, he spoke for two hours and captivated the audience. He recited poems, sang songs and motivated the crowd to mobilize voters.

I have great sympathy for the opposition in Turkey. I know how it feels to lose election after election. I am afraid that it is not easy to break this cycle. Erdoğan has a direct connection with the public. His ability to captivate audiences is a great asset, but it is the 8 million members of the AK Party that deliver victories. The opposition deals with the public through proxies. They think they can beat the AK Party by speaking to the public from TV studios. The AK Party's message is communicated to every single voter personally by members. Meanwhile, the Turkish media functions as political agents for the parties. Organized religious networks have been using their national and international infrastructure to help the opposition. The far-left terror organizations Revolutionary People's Liberation Party-Front (DHKP-C) and PKK are trying to instill sectarian and racial divisions in society through terror and intimidation. The MHP is only connected to nationalist ethnic Turks while the HDP is still in the shadow of the PKK, which is refusing to give up its arms. The CHP is increasingly perceived as a sectarian party. Despite disproportional institutional power, the opposition cannot compete with the AK Party unless it expands and reforms its grassroots support. As long as they define their identity along ethnic lines and religious fringes, the AK Party will continue to get the votes of the majority of ethnic Turks and Kurds, left, right and center.Turkish politics is very different from U.K. politics, but if the Liberal Democrats stand any chance to overcome the Labour-Conservative monopoly, we need to increase our membership as well. Only our members can communicate our values. We do not have the support of big business or unions, and neither the left- nor right-wing media looks on us favorably. Our only ally is the public that wants opportunities for all and to be free from the clench of the establishment. We need to do everything we can to keep the momentum in the surge in membership numbers experienced after the elections.