Myths and reality about the printing press in the Ottoman Empire 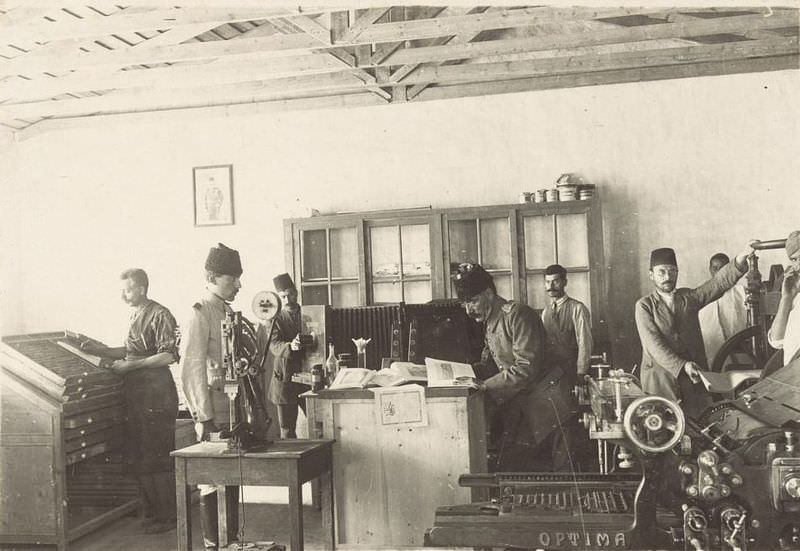 For many people, the late arrival of printing is the reason why the Ottomans left behind other great powers, something they attributed to bigotry. In reality, the first printing press in the Ottoman Empire dates back to the same period of that of in Europe. However, it did not gain popularity. But why?

The Ottomans knew about the printing press long before it was established on their soils. Hence, Evliya Çelebi, who was a 17th century Ottoman historian and traveler, talks about the printing press that he encountered in Vienna, as it was something familiar in his works. The first book in Arabic was published in an Italian town named Fano in 1514. During those times, books in Arabic and Farsi were also published in Venice, Rome and Vienna. These were usually books that merchants and missionaries could make use of. There were printing houses in Istanbul called "basmahane" in the 15th century. However, these printing houses were managed by Greek, Armenian and the Jewish community and they printed books in their own languages. In 1493, there was a Jewish printing house in Thessaloniki. Armenians learned the printing press business in Italy and opened a printing house in Istanbul in 1567, followed by the first Greek printing house in 1627. The very first thing that the Greek printing house printed was a booklet targeting the Jews. Sultan Murad III signed a firman, an official decree, in 1587 allowing the sale of the books in Arabic, Farsi and Turkish, which were published in Europe, on Ottoman soil.

Yet, the Turks did not like books that were printed in the printing houses, but rather preferred hand-written ones. The published books lacked the art and grace of hand-written books. Ottoman intellectuals, who were keen on aesthetics, enjoyed books written with elegant handwriting and whose ink shined, along with edges that were ornamented with golden gilt and covers that were made with care. Reading books was not only a necessity, but also a pleasure. Besides, there were many calligraphy artists who copied plenty of books rapidly. All these people could be out of a job. On top of that, those who were keen on books belonged to a certain class, just as today.

The first printing press, which belonged to the Muslims, was established by Ibrahim Müteferrika in 1727, during the Tulip Era when the Ottoman industrial revolution began. It was opened 36 years later than the first printing press in New York. Said Effendi, who was taken to the Ottoman embassy in Paris as a clerk by his father Yirmisekiz Mehmed Çelebi, admired the printing press in Paris. Upon his return, he assigned İbrahim Agha, of Hungarian descent who converted into Islam, to establish a printing press similar to the one in Paris. At that time, İbrahim Agha gave the grand vizier an pamphlet titled "Tasheel at-Tıbaa." He said many Islamic works were lost in Al-Andalus and other calamities, and there were not enough calligraphy artists to copy the books free of error, and told him about the benefits of the printing press: "The duplication of important books is useful for all. It helps the content of the books to spread. Their writings are legible and are not affected by water. Printing is a profitable art. Thousands of books can be printed, while a volume of a book is written by hand, allowing books to be cheaper. An index is added in the beginning and the end of the book and one can find what he is looking for easily. It would be easy to access books in the rural areas. Building libraries will support Madrasas; hence, the number of people who study science will increase. It serves for the spreading of Islam. Books in Arabic and Farsi, which were published by the Europeans, as they have understood their importance, are filled with mistakes; these mistakes can be prevented. Printing press augments the honor of the state."

The then-Sheikh al-Islam of the Ottoman Empire, Abdullah Rumî Effendi of Yenişehir, was asked: "If a person, who claims to be an expert on the art of printing, says that he can make a mold of all letters and words of the books that are about lexicon, logic, philosophy, astronomy and such non-religious books and copy them by printing these molds on paper, will Islam allow him to copy books in this way?" Upon this question, Sheikh al-Islam gave a fatwa stating, "Those, who are familiar with the art of printing produce many books in a very short time by making molds of letters and words and printing them on paper. Thus, they produce cheaper books. As it is useful, Islam allows these people to do that. A few people who know about the subject of the book should revise the book first. It would be good if the book is printed after reviewing it." This is the real side of the myth "While the printing press was discovered by the Europeans and books were printed, clergy in the Ottoman Empire hindered the printing press by saying it was a sin and it was invented by infidels. We couldn't catch the pace of Europe because of them for many years." which has been said for many years.

The grand vizier liked İbrahim Agha's project. He received a firman from Sultan Ahmed III in December 1727, allowing the printing of non-religious books. Said Efendi and İbrahim Müteferrika founded a labor-capital company and opened the first printing press in a mansion on Harem pier in the Üsküdar-Selimiye district. They hired four scholars as proofreaders. The first book printed in 1727 was a two-volume Arabic-Turkish lexicon titled "Vankulu." The first volume of the dictionary was 666 pages, while the second volume was 756 pages. One-thousand copies were then printed with a font size of 18.

It is told that the calligraphy artists of the period placed their inkstands and pencils into coffins and walked to Bab-ı Ali (Sublime Porte) to protest. Hence, the writing of religious books was given to calligraphy artists alone following this incident. Baron de Tott, who was in Istanbul during that period, claimed that the printing press, was closed due to lack of interest. Orientalists clung to this idea and slammed the Turks. In fact, the printing house was closed for a short span of time because of the Russo-Turkish War but was reopened as soon as possible Since approximately 70 percent of Müteferrika's printed copies were sold until his death, the claim based on the lack of interest to the printing press is baseless.When Said Effendi was appointed as the grand vizier and his responsibility mounted, he left the printing house to his partner. İbrahim Müteferrika (1674-1745) was originally from city of Cluj-Napoca, which was then within the border of Hungary. While he was studying at a Calvinist priest school, he was taken prisoner by the Turks in 1690. At the age of 18, he was sold at a slave market in Istanbul. He gained his freedom after he converted into Islam. He won the approval of the grand vizier Damat İbrahim Pasha of Nevşehir after presenting his book "Risala al-Islamiyya" which praises the superiority of Islam. He later became one of the officers (müteferrika) serving to the sultan on personal matters. He also worked as a dragoman. He was a clever, intellectual and entrepreneur.