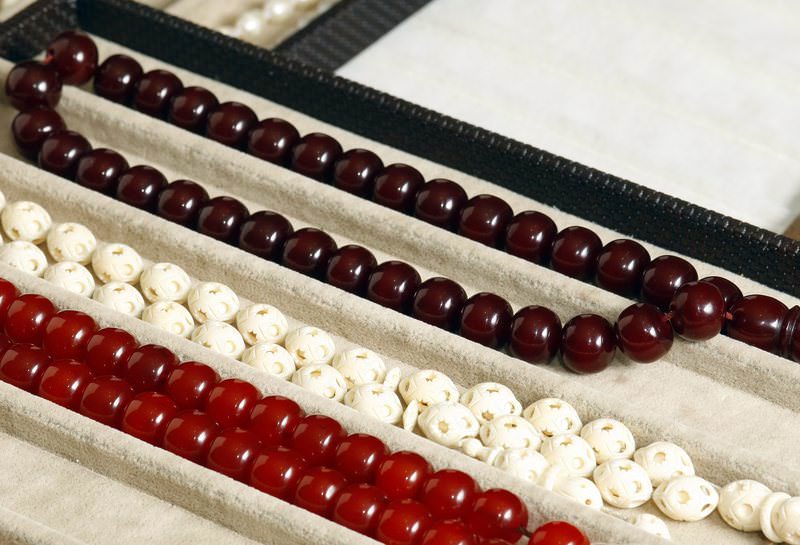 ‘Tesbih,’ a small string of prayer beads that is carried around by many Turkish men, is one of the most common sights in Turkey. Used as a sign of faith as well as an accessory, these small beads are the embodiment of centuries-old craftsmanship

As the Islamic holy month of Ramadan starts this week, sales of these small companions increase and Anadolu Agency has spoken to the craftsmen and women for whom these small items of faith are a passion.

Necip Fazıl Karadağ, 44, who has been making hand-made prayer and worry beads for around 30 years in Istanbul, describes tesbih as an "endless love."

In a small workshop in the Başakşehir district, he works away making every kind of worry and prayer bead for special orders.

"They may look lifeless, but they witness your every moment and live your life with you. So, they are so special, aside from their holy mission," an enthusiastic Karadağ said.

Many religions including Islam, Christianity, Judaism, Buddhism and Sikhism have traditions of prayer beads, from "mala" for Buddhists to rosaries for Catholics.

Religiously, they are used to mark repetitions of prayers or other ritual recitations. But just like the larger Greek "komboloi" popularized by singer-songwriter Leonard Cohen, they can also be used for relaxation, cutting down on smoking, doing tricks, keeping your hands busy or can serve as an expensive status symbol.

Muslims generally use "tesbih" with 99 beads, which symbolize the 99 names of God, while Buddhists' "mala" have 108 beads. "Efe tesbihi," often sported by Turkish tough guys, have 17.

It is not difficult to find them in stores or being sold cheaply on Istanbul's streets, but when investigated, the skills and craft behind a good "tesbih" reveal a complex piece of art.

Karadağ, one of the decreasing number of "tesbih" makers in the city, emphasized the importance of every step in the production process.

"Briefly, we first turn the raw material into cubes, drill the middle of them and transform them into round beads by filing. Then we shape them as we wish.

"During this process, your psychology or mood is crucial. If you are demoralized, you cannot get the result that you want. Users or collectors can understand your state of mind when they hold them."

Materials used to make prayer beads vary. They can be crafted from wood, bone, amber, gold, silver or many kinds of precious stones.

According to craftsmen, amber, which is fossilized tree resin, is one of the preferred materials as some believe it has healing properties and people warm to its orange color and soft surface.

If users want to relieve stress, it is recommended to use a "tesbih" made of ebony. Beads made of agarwood are also popular because of its pleasant aroma.

According to makers, calculations during the production process are important.

"There are some golden rules and a geometric system. They look flawless thanks to this calculation," Karadağ said.

To complete one handmade "tesbih" takes at least three days. "It may take months to finish some models," he explained.

As the process demands so much patience, the number of craftsmen is less compared to 50 years ago, but many continue to maintain the business, eschewing the cheap plastic versions on sale for around TL 5 ($1.80).

"The number of 'tesbih' makers has been decreasing every day because the new generation does not want to do this job since they can be made by machines," said 40-year-old Ayhan Kefa who has been selling 'tesbih' for 10 years in Istanbul's Beşiktaş district.

However, enthusiasts maintain that the difference between handmade and machine-made "tesbih" is important.

"When you hold them, you can easily understand which one is handmade. Handmade 'tesbih' are more special and flawless," Kefa said.

The thing that makes them special is also their makers' love and the importance that they put into them.

"No business has given me the same feeling," Karadağ said, who also moonlights as a musician singing songs based on Islamic mysticism.

"For example, when you sing a song, it finishes there, but when you produce a 'tesbih,' it can live with you until the end of your life."

Mualla Çakır, 67, a retired businesswoman, has been interested in prayer beads for over 15 years. "I do not go anywhere without 'tesbih.' They make me feel good. I love carrying them, physically and spiritually," Çakır said.

Forty-five year-old Aydın Tezgiden is also glued to his prayer beads. "There must be always a 'tesbih' just near me – in my pocket, in my bag, car or on my table."

Tezgiden said his favorites are made of agarwood: "When you use it, it smells very good."

Like people, "tesbih" come in all shapes and sizes. So, every type of hand should have a type of specific worry bead. "If you do not use the right model, the beads will make you stressful," Karadağ claimed.

Prices for handmade beads range from TL 500 to over TL 45,000 depending on their materials and model.

Their prices vary but they are priceless and their job is unique, according to their makers.

"When I am making 'tesbih,' I do not understand how the time and days pass. I love this work so much and thank God every day as he gave me this kind of ability," said Hatice Uçkun, 26, one of Turkey's first female "tesbih" makers.

"I think it is one of the most meaningful gifts that can be presented to loved ones," Uçkun said. "As I enjoy it very much, I am trying to direct other women to this job."

Karadağ added: "Many people remind me about these 'tesbih' and contributing in making them, relieved and peaceful, makes me very happy.

"I win many people's hearts through this business. It is the most important thing for me while doing this job," he said.
Last Update: Jun 21, 2015 11:23 pm
RELATED TOPICS