Sykes-Picot: The Western agreement that sealed the Middle East's doom 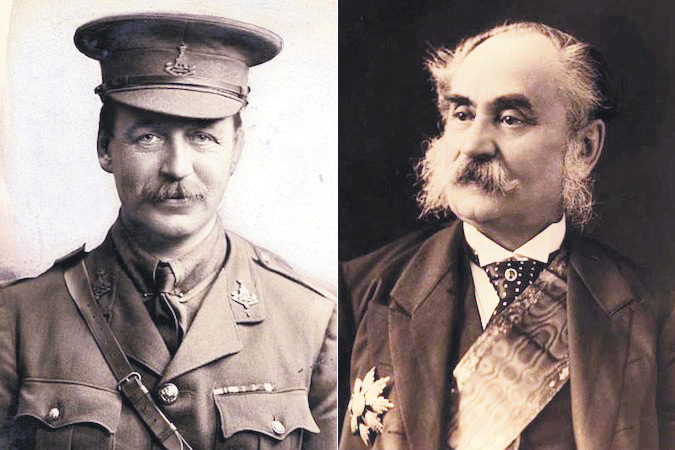 During World War I, the Allied forces defeated the Ottoman Empire and redrew the map of the Middle East for the post-war European colonial period. In order to protect their interests, artificial borders were drawn by diplomats that ignored regional features and sowed the seeds of conflict that continue today

France and England always had good relations with the Ottoman Empire in the classical era. However, both of them had other intentions beyond trade and diplomatic goals: Establishing dominance in the Middle East. This was because their politics were based on supporting the Ottoman Empire against their rival, Russia. The winds suddenly changed toward the end of 19th century, as the relations fairly improved between Russia and England. England negotiated with Russia and was no longer thinking about good intentions for the Ottoman Empire. Britain started to develop projects that would force the Ottoman Empire to keep its hands off the Middle East and continue its existence as a weak state, or abolish the country all together. Sultan Abdulhamid was trying to maintain existing relations England, Russia and France, while at the same time searching for a supporter, Germany had emerged as a new ally. However, Germany's goals regarding the Middle East were not so different from the others.

When Sultan Abdulhamid was dethroned in 1909, the Ottoman Empire was taken over by Germanophiles and Germany took control. The future of the Ottoman Empire was entirely changed when it made an alliance with Germany and participated in World War I against the alliance between England, France and Russia.. It was clear that the empire would have to compromise from many things, whether it would win the war or not. A few years ago, Muslim Albanians, who lived under the rule of the Ottoman Empire for five centuries, won their independence with the successful organization of British intelligence officers, such as Aubrey Herbert, and the connection of the Ottoman Empire with the Adriatic Sea was cut with the foundation of a new state in the Balkans. Similar projects might have been carried out in the Middle East.

The Committee of Union and Progress (CUP) gave the awaited chance. Their nationalist practices and Turkification policy, which was implemented during the war, created discontent especially among Arabs and other Ottoman communities. Hussein bin Ali, the autonomous Grand Sharif of Mecca under the Ottoman Empire came into conflict with the ruling of the CUP. With the help of his son Abdullah, he corresponded with Britain. In 1916, he issued two notifications warning the CUP for its practices against religion. He was then declared as a traitor. The execution of Sharif Hussein's relatives and son-in-law, along with pro-Arab autonomy nationalists upon the order of Syrian governor Cemal Pasha, severed the relations.

At this stage, intelligence officer Lawrence of Arabia, who was assigned to the Arab Bureau of Britain's office in Egypt to pull Arabs to the side of Britain and provoke Arab nationalism at the time of the World War I, came into play. Lawrence contacted Hussein bin Ali, who worked as a senior bureaucrat for years in Istanbul, and his deputy sons at the Ottoman assembly and promised an Al-Hashimi Arabic Islam Empire extending from Syria to Iraq and Yemen, along the Arabian Peninsula in return for a revolt. Meanwhile, an Arab nationalist named al-Ahid helped the group. However, Britain promised France, the ally of Syrian soil, including Lebanon and Palestine, at the beginning of the war. During the war, Turkey specialist Aubrey Herbert from the Arab Bureau prepared a report saying Britain no longer needs France and it was necessary to negotiate with Hussein bin Ali, who hates CUP members, to use Arabs against Turks. His report also said Syria should be given to Arabs. Meanwhile, Hussein bin Ali compromised with Britain's Egypt governor and started the Arab rebellion with his sons in November 1916.

Aware of the principles of playing a double game in diplomacy, Britain executed other policies for the Middle East. Mark Sykes, the son of a Catholic diplomat and trained at a Jesuit school, was a diplomat and deputy with a specialization in the Ottoman Empire. He stayed in Istanbul. Although Sykes does not look like today's so-called politicians and historians, he realized one important thing: "The fall of Abdulhamid is not the fall of a tyrant. It is the fall of a society and view. Instead of religious-based imperial prestige and tradition, atheism, materialism and freedom were adopted. Istanbul changed in one hour. Islam, which was the spiritual supporter of the public and the inspiration of the army suddenly died. The Caliph, ulema and the Quran stopped judging and were no longer an inspiration source," Sykes once said.

As an intelligence agent in Gallipoli, Egypt, Aden and Iraq during the World War I, Sykes was responsible to keep oil reserves under British control and establish a homeland for Jews in Palestine. With French diplomat Georges-Picot, he prepared the famous secret agreement sharing the Middle East between France and Britain. Aware of the promises to Hussein bin Ali, France wanted this agreement to override such promises. Lawyer Georges-Picot was the Beirut Consul of France. He supported Arab nationalism and even ignited a revolt by arming Christians to allow France to invade Lebanon. Before leaving his position, he left his correspondents with Arab nationalists to Turks and had the Arabs captured and executed. Picot was the name that drove the wedge between Turks and Arabs.

Two weeks after the defeat of the British troops against the Ottoman Empire in Iraq, the Sykes-Picot agreement was concluded in London on May 16, 1916. According to the agreement, France was to get Syria and Lebanon along with Adana, Antep, Urfa, Mardin and Diyarbakır, while Palestine and Iraq were allocated for Britain. Russia was not forgotten as it was promised with Trabzon, Erzurum, Van and Bitlis. Minor mandate states would be established across the Arab peninsula. İskenderun would have a free port area, while Jerusalem would be a free city. Sykes, who changed his role from "pro-Turks" to "pro-Zionists," was paving the way for a Jewish country in Palestine. This is because Palestine is described as "a land promised to three sides." After all, Arabia, Jordan and Iraq were in the hands of Hussein bin Ali and his sons. When Arabia was given to Ibn al-Saud, who was a stronger British ally, Hussein bin Ali realized that he was deceived and realized he was wrong to believe in Britain in his justified case. At the end of the war, the two sons of Hussein bin Ali became kings in Iraq and Jordan, and he was exiled to Cyprus.

Picot, who was later appointed as London's ambassador, came to Anatolia and met with Mustafa Kemal, the new actor of the region. He notified Mustafa Kemal of France's support to this new movement. After a very short time, French troops left all the lands in Anatolia that they previously occupied to the Turks. On the other hand, Sykes oddly caught Spanish flu during the Paris Peace Conference in 1919 and passed away. The agreement he signed in the name of the British foreign affairs cleared the way for the declaration of the foundation of a Jewish state on Palestine lands, which is also known as the Balfour Declaration. Sykes-Picot, which was a secret agreement, was announced to the world by Lenin, after the 1917 coup in Russia.

At the San Remo Conference that was held while a new government in Ankara was rallied in April 1920, the British reached an agreement with the French once again. The French left the Iraqi oil, including the lands of Mosul, to the British in return for a 25 percent share of the Iraqi oil and Syria. While Turkey was broken into pieces, Britain was thinking to establish a Kurdish state in Eastern Anatolia and Northern Iraq in order to secure Mosul against the Turks. Britain sent Captain Noel, a British intelligence officer, to Northern Iraq in 1919 to protect the oil region in Mosul against the Turks by using the Kurds. Muslim Kurds sided with the Turks during World War I. Now, Britain was promising a state to the Kurds just as they did to Albania. However, it was not an easy task. Britain hesitated this move as they thought Kurds could not collaborate and did not have the capacity for autonomy and nationalist feelings due to their hostile tribe structure. When Turkey gave up Mosul in the Treaty of Lausanne, the Kurdistan project was put aside.

While all these things were happening, the United States, which was always seen as a neutral state across the ocean, was playing a serious role behind the curtains in all these affairs. World War I placed an important mission on the shoulders of the U.S. and it would gladly pursue it. Thus, the leading actor of "new world order", which was designed by Britain and France, was the U.S, which wanted to take all energy sources under control. However, it was not easy for the U.S. to have a free hand around the artificial borders that were drawn with a ruler, as the U.S. did not know the Middle East very well. The borders that were drawn following the Sykes-Picot were the foreshadowing of a huge chaos that the region would face in the future. On the other hand, great powers always hold on to the Kurdish problem as an upper hand against Turks, Arabs and Iranians.
Last Update: Jul 11, 2015 3:54 pm
RELATED TOPICS