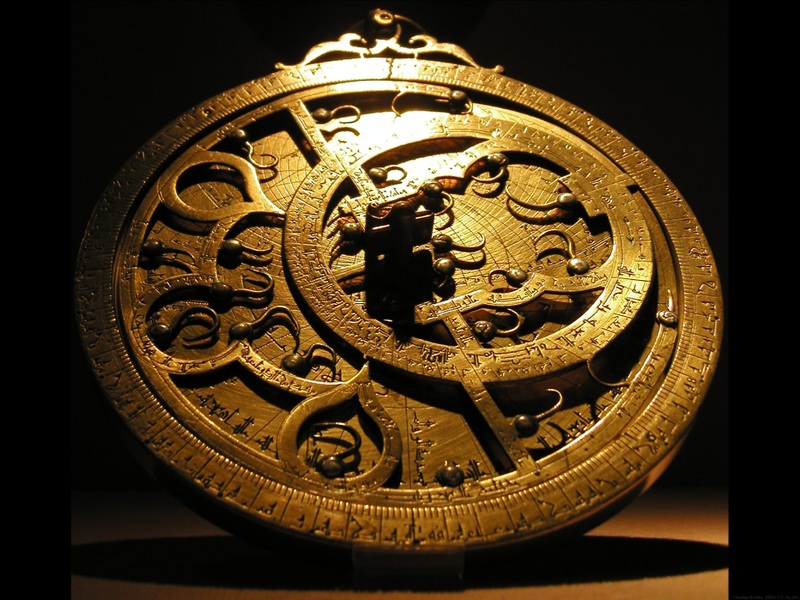 The technology craze that has spread around the globe in the past decades has led to almost every house today having various kinds of gadgets. However, the phenomenon of popular gadgetry is actually much older than one might think. Even in the 13th century, technological gadgets were in high demand such as the astrolabe

Today if you want to learn what the time is, it is not very difficult – everywhere we look we can see a clock. There are digital clocks on our ovens, televisions, car dashboards and telephones. Neon signs in the street tell us the date, time and temperature. How often today does a passing stranger ask us the time? People have become self-sufficient in telling the time, carrying some mechanism that will inform them.

This was not always the case. There was a time before iPhones, before digital watches, before even pocket watches. In times before electronics, all major cities had clock towers or, in the case of the Ottomans, muvakkithane (clock rooms that were usually adjacent to the mosques). The astrolabe was found in these rooms, where it helped the astronomer or clock keeper to determine the time. 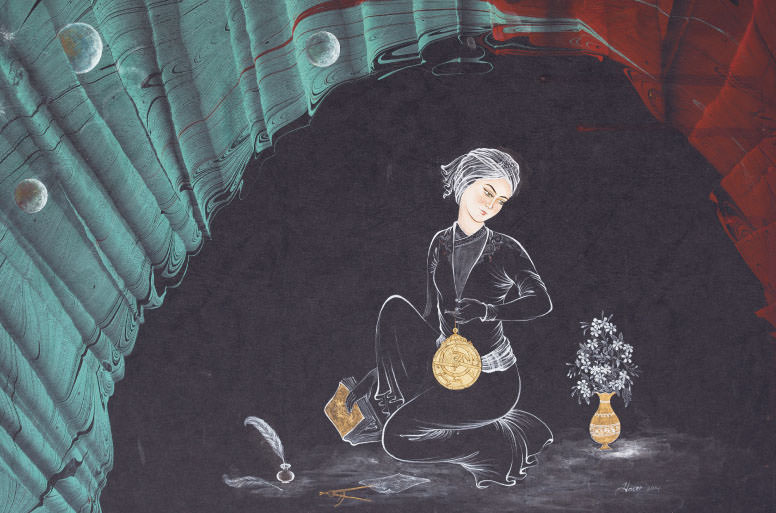 A depiction of Mariam al Ijliya, a famous astrolabe maker who lived in Aleppo in the 10th century. (Courtesy of IGETEV, Muslim Women's Historical Heritage)

The astrolabe has been compared to the iPhone for the 13th century, in that it was the latest form of portable technology that all wanted to possess. In fact, this is not an inaccurate comparison. The astrolabe not only answered the simple question "What time is it?" which today may seem prosaic to us, surrounded as we are by a number of gadgets, but also performed a large number of tasks that answered questions important to everyday life.

The astrolabe has many uses, including allowing people to identify and/or predict the position of the sun, the moon, the planets and stars. It is possible to use the astrolabe to determine the time or the time in another latitude (or if you know the time, but do not know in which latitude you happen to be, you can find this out using an astrolabe). The astrolabe was also used for surveying.

The astrolabe has special significance for Muslims. In the Islamic world, it was used to determine the position of the qibla (the direction in which Muslims pray) and to calculate the times for the daily prayers, which change every day.

It is thought that the astrolabe was first invented in the fourth century B.C. by Theon of Alexandria. However, it was Muslim civilization that really led to the astrolabe taking off in popularity. The earliest Islamic astrolabe can be dated back to the 10th century, with the earliest treatise from this part of the world dating back to the ninth century.

That is to say, the astrolabe was used for all the purposes listed above from classical antiquity to the Islamic Golden Age, the European Middle Ages and even during the Renaissance.

The way in which the astrolabe helped people to perform all these different functions was that it created a "stereographic projection" – that is, it provided a 3-D image of the night sky onto a 2-D surface. As a result, people had a celestial map that they could carry with them and refer to whenever they felt the need.

According to Salim T. S. Al-Hassani, the chief editor of "1001 Inventions: Muslim Heritage in Our World," the astrolabe is "based upon the model of the Earth being at the centre [sic] of a spherical universe with an imaginary observer positioned at a particular latitude and time outside this sphere and looking down upon it. On the astrolabes that the astronomer was holding, the major stars in the sky were represented on a pierced metal late, which was set into a larger flat circular holder called a mater. Because the plate with the stars was pierced, the astronomer could see through it onto another plate, which would have lines representing his particular geographical location."

So, if you want to know the time or perform any of the other functions the astrolabe offers, all you have to do is select a star (if you are using it at night). Then you measure the altitude by sighting the selected star with the astrolabe. The next step is to identify the selected star on the front of the device and move the plates to match the altitude of the star on the back. The result is that you are now holding a model that corresponds to the sky at that precise moment. In order to learn the time, you move the rule to the date line and presto, you know the time!

Thus, it was possible for people from the eighth century to the 16th century – the date at which the first pocket watches started to appear – to determine the time.

There is good evidence that by the 14th century, children were using astrolabes. Geoffrey Chaucer, better known for writing "The Canterbury Tales" – the nightmare of every English lit student – wrote "A Treatise on the Astrolabe." It is claimed to be the earliest treatise on scientific instruments in the English language. Chaucer states, "This treatis, ..., wol I shewe the ... in Englissh, for Latyn ne canst thou yit but small." That is, "This treatise is being written in English because you only know a little bit of Latin." Chaucer wrote this treatise for a child, but whether this was his son, godson or another child he knew is still a matter of debate.

It is only natural to wonder how useful a brass instrument can be for telling time. Even the smallest astrolabes tended to be bigger than the pocket watches which were to come. How heavy would such an object be? And surely, at such a time, a brass object that required a great deal of skill to be made wouldn't have come cheap.

When you learn that the astrolabe was not just made of brass but also out of paper and wood, it becomes clearer why so many people used them. Indeed, the paper astrolabes could be carried in a purse or a pocket.

As mentioned above, the astrolabe had a large number of uses, particularly in Islamic civilization. The Muslims developed it greatly due to the fact that they wanted to determine the times for daily prayers. The times for the five daily prayers change every day according to the position of the sun. It made life a lot easier if people were able to keep track of the changing times. The Ottomans set up mavakkithanes, time-keeping rooms, next to the mosques for this purpose. Passers-by could find out what time it was, and the muezzin would know when to recite the call to prayer. In 1571, Mustafa Ibn Ali el-Muvakkit, the chief astrologer for Sultan Mehmet II, wrote a treatise on the astrolabe.

The astrolabe occupied an important place in the Islamic world not only for its time-keeping facilities but also because it was an efficient way to determine direction. As a result, it was used extensively in determining the direction of Mecca, the Qibla, that is, the direction in which Muslims pray.

Today, the astrolabe is still included in middle and high school curricula. Students learn how to make an astrolabe and then learn its applications in their real day life. For example, to quote from the Indian Institute of Technology, "Knowing an angle along with one other side helps to determine heights because similar triangles always have the same angles … The length of at least one other side needs to be known; usually the distance from the object in question to a person with an astrolabe is sufficient."

Not only this, the brass astrolabes are beautiful works of art, intricately created by skilled masters. There is information about many such masters of this intricate instrument. One such master of this instrument, which could be as beautiful as it was functional, was a young lady living in Aleppo in the 10th century. Although there is not a great deal of information about her, the name Mariam al-Ijliya al-Astrulabi appears in Al Fihrist, the biography/bibliography written by Ibn al-Nadim. In this work, al-Nadim provides information about mathematicians, engineers, musicians, astrologers and tool makers, as well as names of those who made tools to be used by astronomers. Mariam al-Ijliya is included among the 16 names of engineers listed. Mariam was the daughter of an instrument maker, and both were members of the highly skilled engineers and instrument makers of the ninth and 10th centuries. Both Mariam and her father are cited as students of Bitolus, who was apparently a famous astrolabe maker. Mariam was employed along with her father at the court of Sayf al-Dawlah (944-967). It is possible to understand that the daughter and father worked together in making the instruments needed by astronomers.

The astrolabe is an instrument with a long and important history. Unlike modern gadgets, it was a tool that required not only great engineering skills but also a certain artistic flair. With this instrument people, even children, could know what time it was, where the sun was, when it would rise, how it would move across the sky and when it would set. But despite the non-electronic nature of this instrument, the astrolabe has a clear advantage – it requires the user to look up at the night sky. While looking up, perhaps they will stargaze. Perhaps they will contemplate the celestial heavens, making a much-needed connection with nature.