From living on the streets to pizzeria king 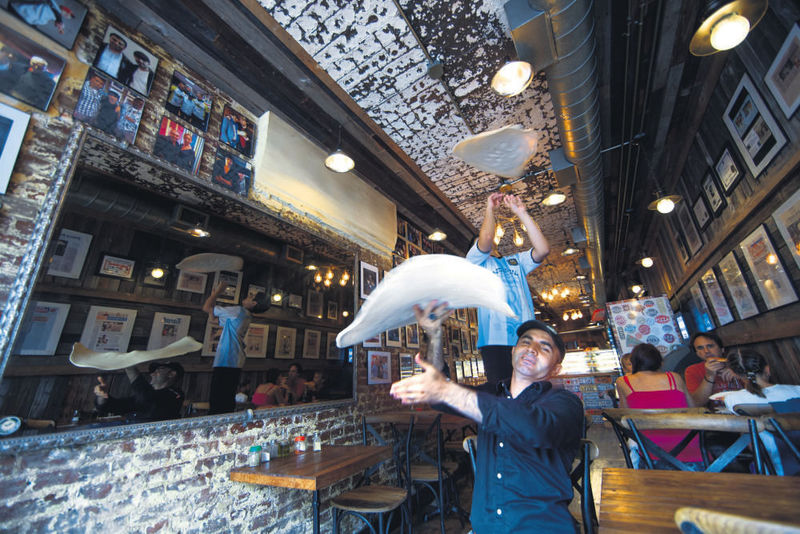 Hakkı Akdeniz, a Turkish man who migrated to North America in 1997 to work, has a remarkable success story. After days spent being homeless and penniless following his arrival in the U.S., he became a three-time World Pizza Spinning Champion, and now runs seven pizza restaurants in New York City

Once a homeless man, three-time World Pizza Champion, Turkish-American Hakkı Akdeniz, now runs seven pizza restaurants and one taco shop in New York City. Following his illegal journey from Canada to New York, the Diyarbakır-born pizza owner marked his name with his ambitions and hardworking nature after years of sufferings and days spent penniless on the streets.

Telling his commendable story to an Anadolu Agency (AA) reporter, Akdeniz was born in southeastern Diyarbakır province's Silvan district. In 1997, he went to Canada and worked for four years at a pizza restaurant with his stepbrother. Akdeniz married a Latin American woman there and had a son, yet he was unable to see him until he was 10, where he had the chance to see him behind wire fences on the U.S.-Canada border. Due to some family issues, Akdeniz decided to leave Canada and go to New York City. He said he cannot forget his sorrowful days, when he had no home or money to buy food.

"A friend of my brother was supposed to meet me at the bus stop. I waited for him for three to four days, yet nobody appeared. I was running out of money and had no choice but to sleep on streets," he said, while recalling some dangerous incidents he encountered in the U.S. One incident was particularly frightful. One day in the early hours of the morning while he was sleeping next to a homeless Senegalese man in a garbage dumpster, a garbage truck came and emptied the dumpster with both of them still inside. Akdeniz saved the life of his friend as the two men narrowly missed being crushed in the hopper.

Akdeniz said his wife taught him Spanish and he spoke French with his Senegalese friend, but he could not speak English, which made his homeless days even more difficult in New York City. Later, the two applied to a homeless shelter, but as they did not have identification, they were rejected. They tried their chance at another shelter where they spent nine weeks. Akdeniz said he met a homeless Turkish woman there. After the woman left to seek out a proper life, she recommended him to a Turkish restaurant owner from Turkey's Sivas province. Paying a visit to his restaurant in Manhattan, Akdeniz said the owner found him a job at another restaurant in New Jersey.

Akdeniz's interest in boxing started in those years. His interest and discipline enabled him to win a Golden Gloves award in amateur boxing. After breaking a rib, he left boxing and opened a small pizza restaurant in 2009 with the help of a loan he received. Akdeniz focused on stretching pizza dough. He also participated in a number of pizza dough stretching competitions and came 87th in his first attempt. He said his failure did not discourage him; he became the world champion in another competition in Italy and gained even more fame when he received his third championship in the U.S. Meanwhile, the number of his pizza restaurants increased to seven. Appearing on many food-related TV programs, Akdeniz also visits schools to teach young people about pizza making. The success story of New York City's famous pizza owner attracted the attention of local news stations, and his story has already been the subject of some documentaries. "If I had not been poor and slept on the streets, I might not have become successful," he said.

Compared to other Americans, Akdeniz treats homeless people well and sends free pizza to the homeless shelter where he once stayed every evening. Now that he has become successful, Akdeniz said he wants to spend more time with his child. He also provided the financial support for his mother so she could travel to Mecca to perform her pilgrimage. He is thinking of setting a Guinness world record by making a giant pizza comprised of 192 small pizzas representing all U.N. countries. His other dream is to open a pizza school in different Turkish cities, especially in his hometown.
RELATED TOPICS