The story of the Ottoman Empire's constitutional monarchy 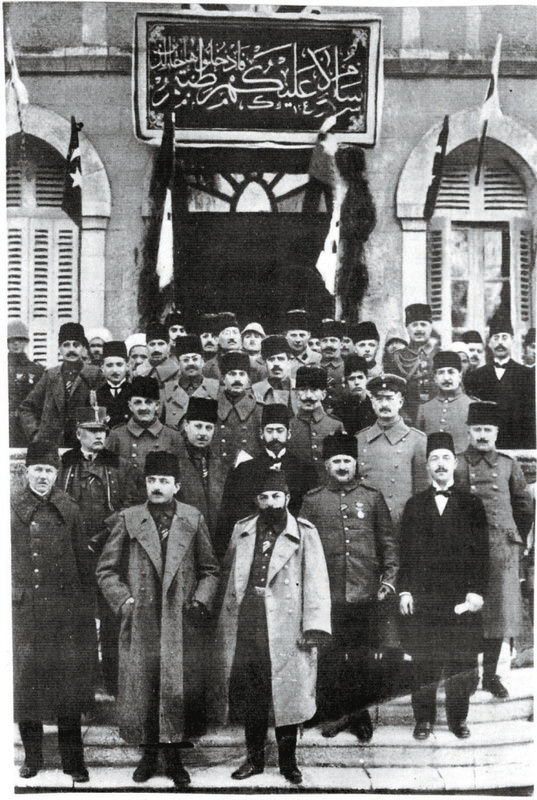 Enver and Cemal Pasha, the leaders of the Commitee of Union and Progress, which seized power after Sultan Abdu00fclhamid II was dethroned, stand in front of other commitee members. Along with Talat Pasha, they were known as the u2018Three Pashas.'
by Ekrem Buğra Ekinci Jul 24, 2015 12:00 am

The Ottoman Empire imposed a constitutional monarchy for the second time on July 23, 1908, 30 years after the first unsuccessful attempt. While the sultan's authority was limited, power shifted to the military and bureaucracy, which dragged the country into WWI

July 23, 1908, is the date when a parliamentary monarchy was re-established in the Ottoman Empire following the first attempt in 1876. This date is one of the most important events of the recent history. The regime of the Ottoman Empire was changed and the power groups that ruled the country shifted to the army and bureaucracy, which are cooperating forces. The Ottoman Empire's first constitutional monarchy experience dates back to 1876. In fact, the Ottoman Empire had never been an absolute monarchy as the European monarchies because there were limitations for the ruler such as religion and traditions. Even the sultan could not change this.

The ideas of liberty and freedom of the French Revolution spread to the Ottoman lands. An intellectual group that did not want to be restricted by traditions appeared. This group admired France as its members believed that this country was the cradle of liberty. This group found support among the bureaucracy. In 1876, Sultan Abdülaziz was deposed and his nephew, Murad V enthroned. However, the new sultan did not favor constitutional monarchy, thus he was also dethroned. Prince Abdülhamidsucceeded in ascending to the throne after promising a parliament and a constitution. The parliament convened and a constitution similar to those in Prussia and Belgium was issued. The government of the constitutional monarchy dragged the country into a war against Russia. The Russians prevailed and the outcome of the defeat was very harsh for the Ottomans, very critical lands were lost. Upon this unprecedented disaster, the sultan abolished parliament. The constitution continued to be in force, but the parliament could not be convened again as elections were not held. The sultan tried to ease the losses of the war through diplomatic channels. He tried to develop the empire, which he ruled from the palace for 30 years, in terms of education, agriculture, commerce and industry. Today, most of the public institutes that operate most successfully belong to that era.

Sultan Abdülhamid II favored a balance policy between powerful European countries. He created hostility between the non-Muslim minority communities in the empire and the small Balkan countries. To strengthen Islamic unity, he used the influence of the caliphate over the Muslim world, a move that worried prominent colonial countries of the time. During this century, Britain established its entire foreign policy on the abolishment of the caliphate, or at least the deposition of Abdülhamid II.

The sultan acted carefully to protect the peace. During his reign, there was only one war. The 1897 Greco-Ottoman War, which broke out upon the Greek invasion of Crete, was the last victory for the Ottomans. The Ottoman army passed through the Termopylae Pass in 24 hours – although the British claimed that Turks can not pass it earlier than six months – and entered Athens. But the cost of the war ruined the economy. The Ottoman currency depreciated and salaries could not be paid. This situation turned the military and civil bureaucracy against the sultan.

Opponents of the regime founded the Committee of Union and Progress (CUP) in 1896. The committee, which was organized in a similar way to the Freemasons, rapidly gained popularity among the military and civil bureaucracy. Upon a fabricated story about the British and Russians dividing Ottoman lands in Reval, the officers of the Third Army in Thessaloniki rebelled in 1908 and shot military inspector Şemsi Pasha. Therefore, the sultan had to call the parliament for a meeting on July 23. This day was declared as "Liberty Festival." The people flocked onto the streets and shouted "liberty, equality and fraternity," slogans like those popular during the French Revolution. The streets were decorated with flags. People wore pins on their collars and postcards sold out. Muslims and non-Muslims posed for the camera arm in arm, bands played anthems while people shouted: "God bless the nation! God bless the CUP."

The abolition of censorship was the first implementation of the parliamentary monarchy. Until that time, newspapers were prohibited from publishing news against common morals and customs or news that created disorder and confusion in society's mind. Books were not allowed to be published before they were evaluated in terms of their compliance to religion, ethics and common knowledge. On July 24, journalists gathered and decided not to apply censorship on draft articles and they were all published without censor. The day of July 24 was then declared as Journalists and Press Day. Afterward, the censorship of the pro-coup group made people long for the period of Abdülhamid II. Upon the abolition of censorship, newspapers began to publish articles against the sultan. They insulted him. Even Abdullah Cevdet, one of the leading pro-coup journalists, later said: "I made up lots of lies against Sultan Abdülhamid. Even I believed in one of them, which was throwing military school students into the sea by fastening a stone to their feet." This type of news became such a phenomenon that the sultan fell from public grace. In 1961, Turkey's late Prime Minister Adnan Menderes experienced similar treatment. Sultan Abdülhamid II made a request to discuss these accusations at the high council. However, the pro-coup group did not accept it because if the sultan had been acquitted, then they would be in trouble. When Britain realized that the CUP, which they secretly supported, fell into the hands of Germanophiles, in other words, German sympathizers, they decided to conduct a counter-coup and pass its management to Anglophiles, the British sympathizers.

A revolt broke out within the hunter battalion stationed in Istanbul as coup defenders. Istanbul drifted into chaos and became a bloodbath. The sultan, who no longer trusted those around him, did not intervene in the situation. A group of undisciplined volunteers gathered in Thessaloniki and headed to Istanbul. The sultan was held responsible for the revolt and was dethroned. The British forces were unable to take power, but got rid of Sultan Abdülhamid II, as they were afraid of his caliphate power.In 1908, a multi-party, democratic administration was established in the empire, but continued for only a few years. The CUP grabbed power following a coup. They closed the parliament and adopted oppressive policies that had not been seen before. Their inexperience and craving led the country into war and disaster. Upon the fall of the CUP in 1918, parliamentary democracy was re-established.

The Ottoman Empire was ruled by a rare democracy that could only be seen in certain countries like the U.K. and Sweden until 1922. However, the life of this new democratic regime was short. The newly founded Republic abolished democracy, banning political parties in 1925.
RELATED TOPICS