The historical city gates of Istanbul 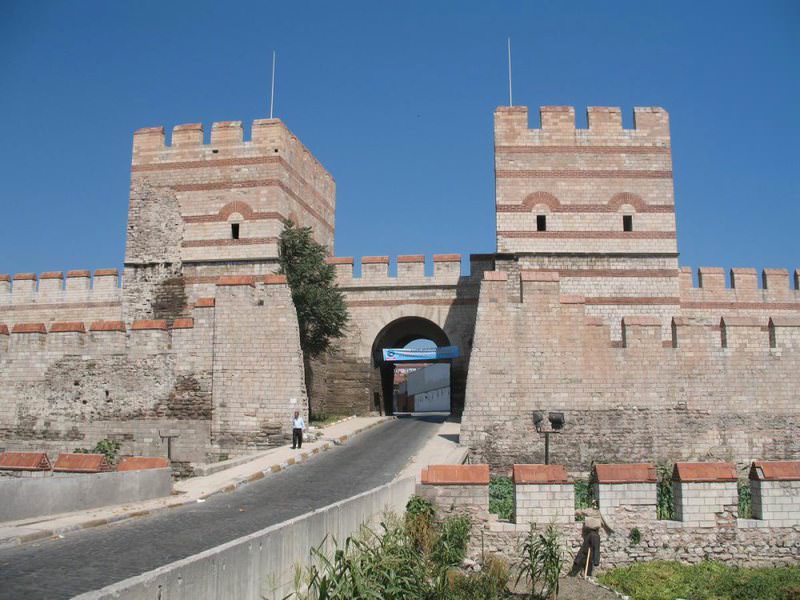 Built in the 5th century, the walls of Istanbul, which are some of the oldest remaining city walls, were used for military and public purposes in the past. Today, most of the gates to the city are associated with the name of neighborhoods that settled around them throughout history

In the past, when talking about a city, the first thing that came into people's minds was the city walls, and when it came to the city walls, gates with different names and shapes used to be remembered. Gates facilitated the protection of a city against its enemies. Those entering or leaving a city were also checked at city gates. They used to be opened at sunrise and closed at sunset.

The city walls of Istanbul, which is one of the oldest cities in the world, were built and destroyed four times. They took their present form under the reign of Roman Emperor Theodosius II in 408 A.D. On the land side of the city, there were two rows of city walls with ditches between them. The distance between the two city walls was 70 meters. Additionally, bastions were built at 50 meter intervals. There were 400 towers and 55 gates on these walls. The city wall extended 6,800 meters along the land side, while the wall on the Marmara coast stretched 8,000 meters. The wall facing the Golden Horn reached a total length of 5,000 meters. Many powerful armies attempted to breach the walls, yet desperately failed in front of them and withdrew. Today, a large portion of the city walls facing the Marmara Sea and the Golden Horn have been destroyed. More than half of the land walls lie in ruins, although some of them have been renovated in accordance with their original form.

Some the gates were built for military purposes, while others served the public. The military gates were of simple design, while the public gates boasted architectural features. When Turks conquered the city, they canceled the military gates by bricking them up. As needed, new gates were opened at certain points of the city.These gates mostly have marble arches. It was possible to reach the wall by using the stairs built on each side. When necessary, iron doors and bars were used to close them. The main gates were comprised of two doors – one interior and one exterior. Except for two of them, under which main roads pass today, all the gates are too narrow for a car to pass through. Most of the destroyed gates featured Byzantine-era reliefs and inscriptions, or Ottoman-era tablets. Among the 55 gates, less than 40 of them survive. Today, 11 gates exist along the land walls. Some of them were built during the time of the Byzantine Empire, while others were opened by the Turks.

On the land walls, the first gate facing the Marmara coast is an ordinary military gate featuring a relief monogram of Jesus Christ. The next gate is the glorious Altın Kapı, "Old Golden Gate" (Porta Aurea), the main ceremonial entrance, used especially for the triumphal entry of emperors into the city. The Via Egnatia, a Roman-era road that runs in the direction of Edirne used to pass through this gate and reach the Haghia Sophia and the imperial palace, taking the name of "Mese." It is called the "Golden Gate" because of its golden wings, which were added in 425 A.D. It was a triumphal arch with monuments on it and later joined to the city walls. At present, it is overgrown with weeds in the middle of a cemetery. 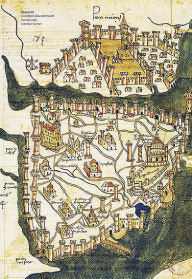 The Yedikule Gate is about 100 meters further on from the Golden Gate. It takes its name from the Yedikule dungeon nearby. During the Ottoman Empire, the ambassadors of states at war with the Ottomans were usually hosted there. A certain portion of the imperial treasure was also kept there. After entering the gate, historic gardens exist in place of former ditches. If you follow them, you see the Belgradkapı, "Belgrade Gate" (Porta Ksilokerkos). It used to be called "Kapalı Kapı" (Closed Gate) because it was blocked up with stones in the 12th century. Later, it was re-opened to access the Balıklı Greek Hospital in 1886. Its name derives from the fact that prisoners brought from Belgrade, which was conquered by Ottoman Sultan Suleiman I, were accommodated there. There were defense towers on it. Silivrikapı, "The Gate of Silivri" (Porta Pege) lies 500 meters ahead of it. Many gates take their name from the road they were built on. This gate is situated on the road to Istanbul's Silivri district, where imperial weddings took place at the time of the Byzantine Empire. There is an epitaph, dating back to 1585, on the gate along with the mace of an Ottoman soldier. This is a sign of an old tradition: The sportsman who won the game used to hang his weapon on the gate.

The Byzantine commander, who rescued the city from the Latin invasion, crept into the city through this gate. The Gate of Mevlanakapı (Porta Rhegion) took its name from the Yenikapı Mawlavi House located outside the walls. This place is a lodge used by Mawlavi dervishes. The gate is the most original gate dating back to the reign of Theodosius, who built the city walls. The Byzantines called this gate "Russian" as the Russian-origin communities living outside the walls could only enter the city through this gate. A little further on, there is the "Gate of Topkapı" (Porta Romanos). This is one of the symbols of the Conquest of Constantinople, as Sultan Mehmet the Conqueror entered the city through this gate. Since it was destroyed during the conquest, it was re-built afterwards. It took its name from the cannonballs in the wall and the Turkish canons that were placed here. Now it lies on a large street. There is also a terrace called "the peribolos," which was built between 15-meter inner walls in order to give soldiers enough space to move. The place is currently used as a café. The next gate is the Sulukule Gate (Porta Pempton). The gate was named "Sulukule" (Tower with water) as it was situated over the Lycus stream. It is a military as well as a public gate, which has reduced in size over time. It is the weakest point of the city walls. The very first Turkish soldier entered the city through this gate during the conquest. A janissary named Ulubatlı Hasan hung the Ottoman flag on the walls of the city around this gate. There was a neighborhood where Romani people lived behind this gate until recently.

A few hundred meters further on is the Gate of Edirnekapı (Porta Harisius, Andrinopolis). This place is one of the seven hills of Istanbul. It took its name as it is situated on the way to the province of Edirne. Shopkeepers who brought goods could only enter the city through this gate, which is why the first district within the walls is called "Karagümrük" (Black customs). Ottoman sultans who succeeded to the throne also entered the city from this gate. It was a sort of gate of ceremony. Today, a huge avenue passes through it. The Gate of Eğrikapı (Porta Regia, Kaligaria) took the name "Eğrikapı" (Crooked gate) from the crooked road nearby. It is also said that the gate is called Eğrikapı as immigrants coming from Eğridir used to inhabit the nearby area and the two-door wings of the gate do not meet. The bloodiest battles during the conquest took place around this gate and the dead body of the last Byzantine emperor was found in front of this gate.

Most of the gates on the walls next to the Marmara, which are ruined, either do not exist anymore or have been blocked up with stones. There was the Gate of St. Barbara, which took its name from the patroness of gunners, Ave Barbara. It was one of the gates through which the emperors entered the city. The palace boats entered the harbor from the palace where Ahırkapı Lighthouse stands today. The Gate of the Lion (Porta Leonis), which took its name from the lion statue in front of it, was used as the gate of galley harbor during the Ottoman Empire. The Gate of Vlanga, which is situated over the Langa stream, is one of these gates. The local people named the Sidera part of the walls that were damaged during the earthquake in 1532 the Çatladıkapı (Broken gate). There were many public gates on the walls near the Golden Horn, which are generally in a better condition than the Marmara walls. However, only a few of them have survived to the present day. There were gates on the walls surrounding the Galata district where Genovese colonies were located. Only a small number of the gates are standing today. The sultan wanted to prove a man wrong as he claimed to know the future and asked, "Through which door will I enter the city?" The man wrote down the name of the gate and asked the sultan not to open it if until he entered the city. The sultan ordered a door to be open through the walls near the sea and entered the city through this gate. He later opened the note of the clairvoyant and saw: "May your new gate be blessed my sultan." Yenikapı (New Gate) is located where the ferry dock stands today.
Last Update: Aug 05, 2015 4:13 pm