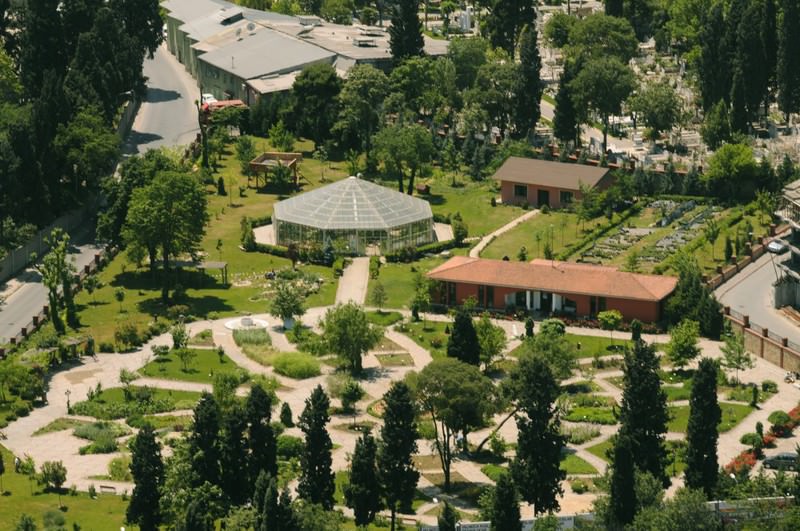 Opened 10 years ago for people to learn more about the plants that are used in traditional medicine, the Medicinal Plants Garden in Zeytinburnu has 800 medicinal plants on 14,000 square meters. The garden has many researcher and experts who are searching for life-saving formulas from the plants

"Nature is our first medicine," says a student visiting Turkey's first garden for medicinal plants - just one among an army of researchers and experts who come here to see hundreds of potentially life-saving species.

"This garden is teaching us how our nature and environment are important," says Vital Kwizera, 30, a student enrolled in the department of plant protection at Uludağ University in Turkey's western Bursa province.

Vital - who came to Turkey last year from Burundi for a study program - has been walking through a 14,000-square-meter Zeytinburnu Garden of Medicinal Plants in the city's heavily built-up European side.

The Zeytinburnu Medicinal Plants Garden in Istanbul opened its doors 10 years ago to make up for this exact knowledge deficit. The garden, which is the first medicinal plant garden in Turkey, enables people to learn more about the plants that are used in traditional medicine and see the fresh plants that we buy from the herbalists in ground and powdered form. Initiated by the Zeytinburnu Municipality and Merkezefendi Traditional Medicine Association to raise awareness of the ecosystem, the garden hosts seeds that are brought from all over Turkey and the saplings are planted over a 1.4 hectare area grown with care.

Plants are the roots of today's drugs and pills, and people across the world were - and some are still - using them to heal wounds or to end everyday complaints, like stomach pain or toothache.

Vital has now turned his summer holiday into an opportunity, coming to Istanbul to see the garden and study medicinal plants like alcea, dill, celery, chamomile, avena, chard and others. "The place is very interesting," he says enthusiastically, "because it is full of medicinal plants; it is unlike those in my country, because Burundi is tropical, the climate is so different, so plants are mostly different." "This is not a botanical garden," a senior biologist at the garden, Tuğçe Ağba, tells Anadolu Agency. "There are no colorful, decorative plants here. Our aim is to introduce medicinal plants and to increase the number of species here."

There is a greenhouse, herbarium, a seed bank - which includes around 100 imported seeds, plus around 700 local ones - as well as a laboratory, which all help preserve and develop plant diversity and use their medicinal properties in a safe way.

The garden - the first out of tens of others across Turkey - is an opportunity to learn about the environment and be aware of the ecosystem that has been serving people for thousands of years - all to help find a cure for their illnesses.

Phytotherapy, or the study of medicinal plants, is a traditional treatment method but "we cannot call it an 'alternative treatment' method," says Professor Murat Kartal, from the Pharmacy Faculty of Bezmialem University in Istanbul. "If anything is 'alternative', then it is today's synthetic drugs, which came much later," he says.

Kartal is one of the pioneers of Turkey's first phytotherapy center which will open in September. "There have been many trials in this field, but ours will be the first real industrial one," he says.

A group of experts have been studying the plants at the Zeytinburnu facility and are now almost ready to start producing herbal drugs, using the extracts.

When compared to preparing synthetic drugs, it is more difficult to make herbal remedies, says Kartal: "There are only one or two components in synthetic ones, while there are between 50 to 100 in others."

However, herbal drugs have few adverse effects, unlike synthetic ones, he adds.

Pointing to some misuse of herbal medicines by the public, Kartal says no plant is harmful if the right substance is used in the correct dosage. Turkey's media has recently released stories about people developing health problems after drinking herbal tea to lose weight.

One 16-year-old girl was reported in the second week of July to have suffered a heart attack as she drank too much of a weight-loss drink that she bought online.

"It is not the plant itself that harmed the girl," Kartal says. "Many herbal drugs or teas on the market are later found to include some chemicals.

"Phytotherapy is a scientific method of treatment, and our aim is to prevent such misuse, making sure that the correct and high-quality herbal drugs are on the market."

Ağba, the Zeytinburnu biologist, agrees: "We are working to increase awareness of medicinal plants and herbal drugs, and to combine traditional and modern treatments in a conscious way."

She warns: "You should buy herbal drugs that have 'organic' certificates on them."

The Zeytinburnu facility cannot be called "an organic garden" Ağba adds, "as the place is in the middle of a highly polluted 15-million-strong city."

Educational activities, workshops and some seed-sharing festivals are held there throughout the year to encourage people come and see the plants.

There are free and paid-for courses giving information about the medicinal plants.

It also offers an opportunity for trainees. During the summer, when schools are closed, students from across Turkey come to work at the garden, either as volunteers or as part of their studies at university.

"It was the harvest season last week, and we are now cleaning the garden of weeds," says Beyza Kebelioğlu, 18, who is studying at the Organic Agriculture department at Kocaeli University.

Her peer Kübra Güney, from 19 Mayıs University's department of Medicinal and Aromatic Plants in northern Samsun province, says she learns a lot more in the garden than she learns at the school. "It is great that all the plants here are somehow useful, either used as salves, drugs, soaps or tea."
Last Update: Aug 02, 2015 11:10 pm
RELATED TOPICS