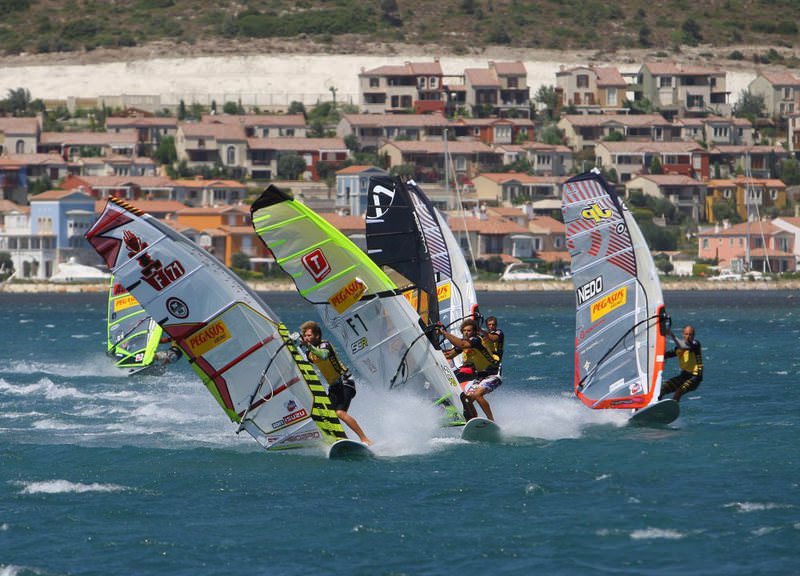 Çeşme continues to swarm with vacationers this year. Not only those who are on their annual leave but also people who want to make use of their weekends in this beautiful Aegean district jump in their cars and drive to the district

Çeşme welcomes people who want to surf or have fun after a delicious dinner. This is in addition to the unimaginable beauty of the coast and sea. As it has a unique architectural style and a variety of accommodation opportunities from large five-star hotels to small boutique hotels, Çeşme has become the number-one choice for many people for a vacation or a quick getaway. Located in İzmir's westernmost point, Çeşme was called Cysus by the Romans, and it was one of the 12 colonies of Ion. The Fortress of Çeşme, which was built by Ottoman Sultan Bayezid II, is the most visited historical site in the district. The fortress has been preserved well over time and it is currently home to the Çeşme Archaeological Museum.

Although the most popular place in Çeşme is Alaçatı, which is famous for its cobblestone streets, Çeşme offers many places to go sightseeing. The neighborhood was rediscovered by windsurfers not long ago, in the early 2000s. In the last 10 years, Alaçatı became famous for its stone houses and has grown into a top holiday resort. Vacationers who swim and sunbathe at the beach clubs in the morning and refuel their energy during sunset parties, flock to the center of Alaçatı in the evening. Restaurants offering gourmet tastes along with bars and clubs are located in the center of the district. People are not surprised when they bump into a celebrity while strolling through the streets of Alaçatı either. Hacımemiş Street is the district's most popular street. You may also find it hard to choose between the small boutiques when you're browsing their selection of designer clothes. Do not miss out on the chance to pay a visit to the antique shops, however. Moreover, Alaçatı also organizes the famous "Ot" (Grass) Festival every spring. The festival, which displays grasses and herbs authentic to the Aegean region, is a very entertaining event.

Ilıca is another favorite spot of holidaymakers. Its white sandy beach stretches for two kilometers. The boiling thermal water under the sea has converted the beach's coastal water into thermal pools. Surrounded with mastic and olive trees, Ilıca is ideal for families with children.

Ildırı was the first inhabited place on the Çeşme Peninsula during classical antiquity. Its original name was Erythrai, which derives from the Greek word "erythros" (red). It is believed that the neighborhood was named after its red soil. Founded in a bay that is surrounded by small islands, Ildırı features an acropolis, an ancient theater and the Temple of Athena that must be seen. History lovers especially should visit during sunset to enjoy the incredible view. Ildırı also satisfies those who are fond of delighting their palates with its seafood restaurants and breakfast places.

Dalyan, which is also known as "Eski Camii" (Old Mosque), is located two kilometers from Çeşme's center. Many people from the Black Sea region migrated to Dalyan during the previous century. Dalyan is a stop that you should not miss if you love seafood. Additionally, Reis Dere is a tiny village that has managed to preserve its historical atmosphere and traditions. The village usually welcomed immigrants from Rumelia and it is famous for its thermal waters, mud baths and seafood restaurants. People who are interested in gastronomy flock to Ovacık, another town. Viticulture and winemaking are still common in the region as well. Ovacık's locals are also involved in the fruit juice, lavender and grape seed trade. The region is also known for its authentic artichokes, melons and protected breed of sheep. Famous for its sourdough bread and olives, the village furthermore features an authentic coffee house for those who want to try its sage tea.

Çiftlik's Pırlanta (diamond) Beach is preferred by those who want a shining sea and tranquility. Moreover, the best seafood restaurants of the district are located in Çiftlik.

1. You should eat "kumru" (a Turkish sandwich typically with cheese, tomato and sausage) made by its inventor, Hüseyin. He discovered the unique delight while he was making hamburgers during his military duty.
2. Mussel seller Seyfi has become one of the symbols of Çeşme. It is a tradition to eat mussels while sunbathing on the beach.
3. Alaçatı's wind is world-famous. There is no better place to learn how to surf other than Alaçatı.
4. You should taste Bayır's coffee while in Alaçatı.
5. Eat İmren Patisserie's resin cookies and pudding.
RELATED TOPICS