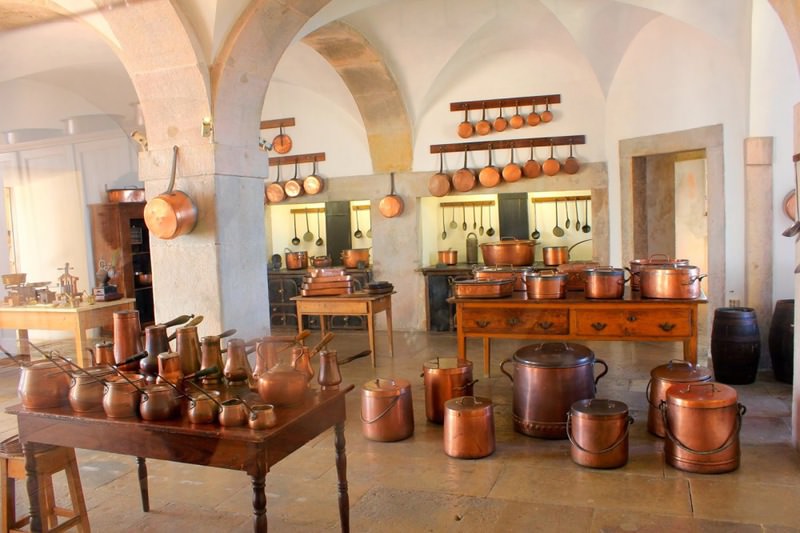 Copper pots hanging from the kitchen ceiling or wall with the sun glimmering off them is an image that brings up many emotions. Copper, the ‘jewelry for the kitchen,' gives a homey, warm atmosphere is often used by professional cooks who really know their stuff

Many years ago, as we were moving out of one apartment building into another, the landlady of our old building sent a message. The apartment building we were leaving was scheduled for demolition, making room for a spanking new building. The attic of the apartment building was chockablock with old appliances, kitchen equipment, sinks and other household goods. The landlady asked us to take anything from there that we liked, otherwise she would give it all to the "eskici" (rag and bone man).

Thrilled by the opportunity to go treasure hunting in such a place, we wasted no time. There were old electric ovens, fans, sinks and lanterns, but what caught our eye were a large number of dark grey, almost black, pots and pans. Glimpsing the pattern made by small hammers, hammers used to beat the metal flat and then to give it shape, we knew that these were copper pots and pans that had been tinned, and then left to the dust and dark of the attic. We double-checked with our landlady – did she really want us to have these? The answer was "of course," she had no use for them. Among these were old kettles, water heaters, trays, large flat bowls for mixing dough and cooking pots.

This was many years ago, and I must confess that these tarnished pots and pans were left to much the same fate in a cupboard in our new kitchen. To have them all polished and have the tinning renewed seemed a daunting task. It had to be done by someone we could trust, and carrying large numbers of pots and pans was more than we could face at that time. But recently, we bit the bullet and sent them to be polished and tinned. They came back from the "usta" gleaming and shining. Many of them were unrecognizable; the grey, black dusty vessels now gleam in the sun, inviting one to come and cook.

My favorites are the rounded pots with the simple but aesthetically pleasing lids. Being lined with tin, they are beautiful for cooking, and the shape and color is nostalgic of a Turkey that is quickly being lost. They are unlike the sleek French pots and pans. These round pots are homey, suggesting a casserole to feed a family, or enough stuffed peppers to please everyone. The Turkish pots and pans are extremely functional, but the shine of their rounded bellies is no less glamorous than the flat French crepe pans.

Copper is a material that has been used in cooking vessels for thousands of years. Copper artifacts dating back to 9,000 B.C. have been found in the Middle East. It is interesting that soon after the discovery of copper, metallurgical processes for tin and bronze started to appear, making the copper more durable. Apparently, ancient Egyptians used copper to make water and oil storage vessels; it is thought that the antibacterial properties of copper were well understood in the ancient world. By the early 1800s, people realized that copper was a good insulator and was also a superconducting material.

Copper is an essential trace mineral present in every tissue of the human body. Copper helps the body form red blood vessels and helps us maintain healthy nerves, immune system and bones. Copper is present in a many foods, such as shellfish, whole grains, dried fruit and dark leafy greens.

As a metal to be used in cooking utensils, copper is lighter than cast-iron and conducts heat much better; copper conducts heat five times better than iron and 20 times better than stainless steel. In fact, the superior heat conductivity means that precise temperatures can be reached using a copper pot or pan. This also means that by changing the intensity of the flame, it is possible to instantly change the temperature of the copper pot, and thus achieve great results. As the copper loses its heat when the pot or pan is removed from the heat, the food stops cooking, unlike pots and pans made out of other materials. Also, the thermal conductivity of copper means that there is an even heat distribution over the surface of the pan. That is, food on the edges of the pan cooks as fast as that in the middle. Chefs use copper pots and pans to prepare intricate and delicate food that requires strictly controlled temperatures. Some sauces require constant stirring in a pot made from other materials; in a copper pot, you can be more cavalier, ignoring the sauce a bit more. All this means that not only does copper give better results, it also uses less energy to attain these results. Copper is green" in that it has optimal conductivity, and the heat accumulation allows the chef to save a great deal of energy. In addition, copper is 100 percent recyclable and renewable.

Another advantage of copper is its aesthetic nature. It is a product with a natural beauty. Copper is also preferable over other traditional materials like cast iron or enamel pots and pans in that it is lightweight, yet sturdy enough to be safe on top of the stove. It is a durable metal and hygienic, as it does not rust or corrode. In addition, copper has an antibacterial property; copper is toxic to germs and bacteria. This is the reason why water pipes are often made of copper. As a metal, it is malleable, allowing the coppersmith to easily give it shape.

Copper pots, unlined, are traditionally used for whipping egg whites and in the confectionary industry. Chocolate, caramels and jams are traditionally cooked in copper kettles, as this enable precise temperature control. As a child, our winter logs were kept in a large copper vat that had been used in the Midwestern woods to cook maple syrup. It was so large that I have vivid memories of sitting in it. The shiny copper sides reflected the entire sitting room, and it is perhaps this memory that stirs when I see a copper pot

But there are disadvantages of cooking with copper. As a metal, it is highly reactive to some foods, particularly acidic foods. There is a potential toxicity that exists in copper. The metal can be easily dissolved by some foods, and large amounts of copper can cause nausea. While we need copper in our bodies, too much is bad for the health. As a result, copper cooking vessels are traditionally lined with tin, and in more recent times, with stainless steel. Tin wears out, meaning that it has to be replaced, every few years. The word "tinker" was used for the people who used to come to the door to pick up people's pots and pans to re-tin them. In our neighborhood in Istanbul, tinkers still come every year. They sit on the corner opposite the local grocers and polish and tin pots and pans for people. However, it is often said that these tinkers can use lead in the tin mix. And it is for this reason that when tinning copper, it is best to find a reputable tinker rather than rely on a passing tradesperson.

Tin is very soft, so hard utensils should not be used when cooking in it,rather the more old-fashioned wooden spoons. When cleaning the pot, do not use abrasive materials, but soft sponges and loving care on the tin surface. Tin also has a low melting point (230 C), so a tinned copper pot should never be left on the stove empty or put in the oven at a high temperature.

Another disadvantage of copper cookware is that it requires greater care than pots and pans made of other materials. Copper tarnishes and requires cleaning to keep it bright and shiny. And this is perhaps the most attractive aspect of copper: The bright, gleaming copper adds warmth and beauty to any kitchen.

While older copper European pans were often "dovetailed," that is consisting of two or more pieces joined together, a technique that takes great skill, Turkish pots are usually made from one piece. This method is also one that requires great skill, as the coppersmith uses a small hammer to give shape to the pot. Hammering copper strengthens the metal, and the small, regular hammer marks create a beautiful appearance, creating an uneven surface that gleams like the sun striking water.

Copper pots are expensive today, a situation that was no different in the past. 200 years ago copper teapot costs the equivalent of one month's wage for a working man. Thus, those people who had copper pots took great care of them – in the U.K., sand for cleaning copper pots was even imported from France, showing how important cleaning copper was. The great care given to copper means that we can find many old pots still existing today.

If you are wandering through second-hand shops and see a grey round pot winking out at you, stop and pick it up. If it is light in weight, it is probably aluminum, but if it has a bit of weight, it may be copper. Look for the small hammer marks. If you decide that it might be copper, take it home. Give it some loving care, and it will be a pot that will take care of your food, be it on the stovetop or in the oven, throughout your life.
Last Update: Aug 16, 2015 10:09 am
RELATED TOPICS