Ancient ruins in Turkey: History at your feet 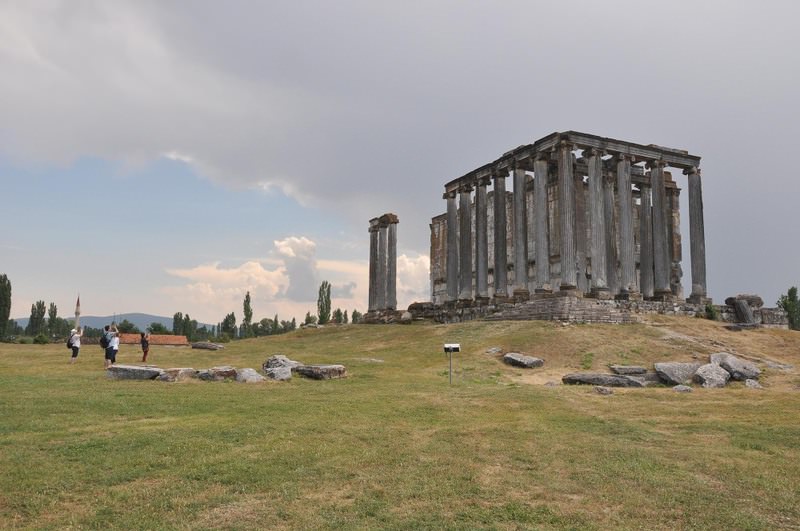 Most tourists coming to Turkey are attracted to its sandy southern beaches, green scenery in the south and beautiful city of Istanbul, but the ruins of ancient Roman and Greek cities offer international and local tourists a chance to explore the footprints of ancient people

Being the crossroads of civilizations for thousands of years, Turkey is a place you cannot visit without tripping over ancient ruins dating back thousands of years. First time visitors are often astonished to discover Turkey's wealth of Roman and Greek ruins. Almost everywhere you visit, you will be within easy reach of reminders of the Romans and Greeks who built magnificent theaters, temples and homes. Here are some ancient ruins that must be seen while visiting Turkey's ancient cites.

The remains of the ancient Greek city of Knidos are among the most picturesque historic attractions in the region. Located near the modern town of Datça in Muğla, the ancient ruins are perched on a steep hilltop overlooking a natural harbor. Founded by Greek settlers, Knidos was an important cultural and political center by the fifth century B.C. and because of its large natural harbors, the city was also an ancient trading hub. The city was famed for its association with Aphrodite and for its famous stature of the goddess, sculpted by Praxiteles of Athens. Although the statue has not survived, a number of copies exist, one of which can be found in the Vatican Museum. Even though the ruins are not as well preserved compared to other ancient cities in Turkey, Knidos is worth a visit because of its scenic and quaint atmosphere combined with rich history.

Miletus is an ancient Greek city on the western coast of Anatolia near the mouth of the Meanders River. Its ruins are located near the modern village of Balat in Aydın province. With an impressive ancient theater among its ruins, Miletus's history dates back as far as the 16th century B.C. Miletus eventually became a thriving hub from the eighth and seventh centuries B.C. until suffering significant destruction during its capture by the Persians in the sixth century B.C. It was rebuilt on a new site after this, and once again became an important center. In its heyday, Miletus was a magnificent city renowned for its great philosophers. It is said that the city's success was due in large part to its port, which eventually silted up, contributing greatly to its decline. Unfortunately, today's ruins of the ancient city are barely a shadow of its former glory. The 15,000-seat Roman theater is the main attraction of the site. One fascinating aspect of the theater aside from its superb state of preservation are the inscriptions that are said to reserve seating for certain groups, including one for "Jews and God fearers." This is said to show Miletus to be a tolerant, multicultural society. Also, make sure you check out the small remains of the colonnaded covered walkway, the Baths of Faustina and the reasonably well-preserved Temple of Apollo.

Aizonoi is an ancient city in western Anatolia located in what is now Çavdarhisar in the province of Kütahya. With its ruins straddling the River Penkalas, 1,000 meters above sea level, the city was once an important political and economic center. Surviving remains from the period include a well-preserved Temple of Zeus, a combined theater-stadium complex, and an ancient indoor market building known as a "macellum" inscribed with a copy of the Price Edict of Diocletian. In 2012 the site was submitted for inclusion on the UNESCO World Heritage Site List.

Zeugma was a city in the ancient Kingdom of Commagene, located in modern-day Gaziantep province. Being one of the most important cities of the Eastern Roman Empire, Zeugma was originally founded around 300 B.C. by one of Alexander the Great's successors, his general Seleucus Nicator. The military and commercial importance of Zeugma led to major growth and wealth with as many as 70,000 people living in the city at its peak. As such a crucial strategic crossing, Zeugma was always a target in times of war. Today, much of the site is now underwater due to modern dam-building projects. Surprisingly, what is left of Zeugma itself has been protected to ensure it will survive the waters and be preserved for the future. The higher areas of the ancient city are also under renewed excavation, and protective structures have been put in place to cover the newly discovered remains of the city. In 2013, an excavation project conducted by Oxford Archaeology and supported by the Packhard Humanities Institute of Los Altos, California, and the Culture Ministry unearthed three more ancient Greek mosaics. Those interested in seeing the ruins of this ancient city should head to Gaziantep to the impressive Zeugma Mosaic Museum where an amazing number of brilliantly preserved mosaics from the site are displayed.

When it comes to Roman cities, Ephesus is rightly acclaimed as one of the world's greatest historic sites, with its vast group of excavated buildings dating back to its Roman heyday. Ephesus, a city that became part of the territory of the Attalids of Pergamum and was later handed to Rome in 133 B.C. by King Attalus III, was once the capital of the Roman province of Asia. Located 3 kilometers southwest of present-day Selçuk in İzmir, Ephesus's location is perfect. Transportation to the ancient ruins is quite easy from Kuşadası and Selçuk as well as for cruise passengers anchored in İzmir. The city was famed for its Temple of Artemis, completed around 550 B.C., one of the Seven Wonders of the Ancient World. More than anywhere else, the Greco-Roman world comes alive at Ephesus. After almost 150 years of excavations, the city has been recovered and renovated structures have made Ephesus Europe's most complete classical metropolis, with 82 percent of the city still waiting to be unearthed. When visiting, make sure to check out the terraced houses, the incredible homes that have been completely dug up, featuring frescoed walls and mosaic floors. Offering an insight into what life might have been like for citizens in the first and second centuries A.D., these homes are a must see when visiting Ephesus.
RELATED TOPICS