Hostility between Selim I and Ismail I underlies sectarian differences 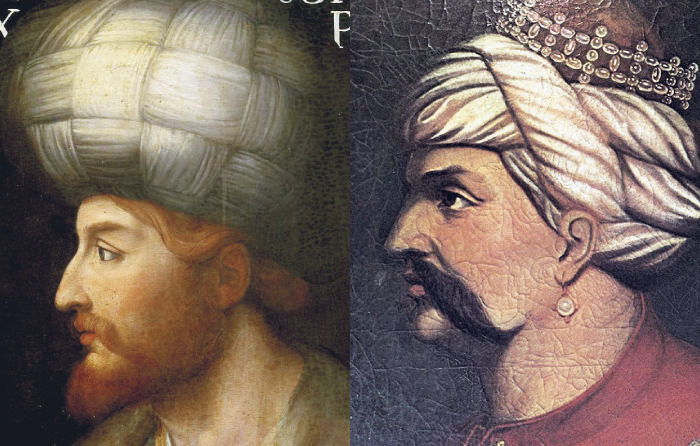 Selim I and Ismail I, two Muslim rulers that reigned over the Ottoman Empire and the Safavid Persian Empire, two major powers in the 16th century, always had a hostile attitude toward each other that arose from political conflicts and sectarian differences. This conflict led to the Çaldıran War, which concluded with a decisive Ottoman victory and started the dissolution of the Safavids

Shah of Iran Ismail I, who was descended from renowned Kurdish Sunni sheik of Sufism, Safi ad-din Ardabili, and therefore who's dynasty was called the Safavids, followed a different path from his ancestors, which surprised everyone from his time. The great-grandfather of the sheik was a Kurd from Sinjar. However, the family embraced a Turkic identity and began speaking Azeri along with Persian. Ardabil is a city near Tabriz, Iran.

Cüneyd, one of the grandsons of Sheik Safi al-din Ardabili, was married to the sister of Uzun Hassan, who was the ruler of the Aq Qoyunlu, the dynasty that ruled over parts of Iran and eastern Anatolia from 1378 to 1501. Because of his political ambitions, he accepted the Shiite sect toward the end of his lifetime. He died while he was fighting against the Shirvanshahs who reigned over Iran and Azerbaijan. His uncle took Hassan's son Haydar under his protection and offered the hand of his daughter to Haydar in marriage.

Haydar wore a crown with 12 cusps, a sacred item in Shiite Islam, which symbolized the 12 imams descended from the prophet Muhammad. He and his men also wore red caps symbolizing the blood of Hussein ibn Ali, the grandson of the prophet who was murdered in Karbala. This is why the locals of Anatolia called them "kızılbaş" (red heads). Like his father, he died while fighting against the Shirvanshahs, at which point his six-year-old son Ismail succeeded to the throne.

Ismail's mother was from the Aq Qoyunlu dynasty. Ismail revolted against the Aq Qoyunlus who protected him for many years and erased the state from the face of the earth. He sat on his grandfather Uzun Hassan's throne in Tabriz in 1502 and killed the members of the Aq Qoyunlu dynasty, only a few of them were able to take refuge in the Ottoman Empire. Ismail even killed his own mother as she denied converting to Shiite. He later rolled up his sleeves to undertake a huge massacre of Sunnis and killed hundreds of thousands of people. His grandson Shah Abbas I completed the massacre his grandfather started and left not even a single Sunni in Persian lands.

Following the political domination of Abbas in the region, Shiite Islam rallied supporters in the areas of what are now Iraq and Iran since it was presented as an ideology of empire. However, it had never gained an absolute majority until Shah Abbas' reign. Once the hegemony of the Abbas was over, the power was taken over by Turkic people. Apart from Afghan and Kurdish dynasties, Turkic people ruled over Iran for nearly 1,000 years. During Ismail's reign, the administrative power was once again in the hands of Turkic people.

Shiism has many moderate but few extreme branches. Ismail belonged to an extremist Shiite branch that believed the prophecy and divinity of Ali. Ismail also wanted to establish a reputation among the people by forging a lineage document indicating that he was the grandson of Hussein ibn Ali. He then orchestrated an attack on Uzbeks in the east. It was rumored that he drank wine from the skull of Muhammad Shaybani, the Uzbek ruler and stuffed his skin with straw before sending it to the Ottoman Sultan Bayezid II.

Following this attack, Ismail invaded Iraq, Azerbaijan and eastern Anatolia. He tried to spread his belief through the missionaries that he sent to the Iran, Iraq, Caucasus and Anatolia. His belief was embraced by nomads and some dervish lodges, and he also tried to lure the Turkmens in the region to join his cause by promising them governor positions. Many poems and folk songs dedicate to the Shah were sung among these nomads who were not used to the state authority. Bards traveled village to village and sang: "The Shah says nicely that coma/Join to obtain dignity/Mountains, bow down, bow down/Allow me to go to the Shah," singing his praises.

Shahkulu, one of the agents that Ismail sent to Anatolia, tried to spark a rebellion in the Ottoman Empire in 1511 but he was defeated by Ottoman forces. Shahzade Selim, who was then the governor of Trabzon, was extremely worried about Ismail's activities in Anatolia. He dethroned his father Sultan Bayezid II, who insisted on following peaceful politics with Iran and was crowned Selim I. Selim considered Ismail, who posed a threat to Sunni Islam as well as the integrity of Turkic world, as a priority due to national security and religious matters. The line: "Let's destroy the country of the Kızılbaşes" in one of Selim's poems, points to his ideal.

Selim marched to Iran to face Ismail's army in 1514. This long and troublesome journey demoralized the Ottoman army. The Persian army was nowhere to be seen as Ismail wanted to draw the Ottoman army deep into the lands of Iran. Selim was determined; he continued to march by talking strict measures when necessary while trying to keep the army's morale high.

Finally, the armies confronted each other on the Çaldıran Plain, which is located close to the borders of present-day Turkey-Iran. Ismail was hammered after a short battle. He hardly fled with his life, leaving his treasure and even his wife on the battlefield and losing his capital city. He asked for help from the Holy Roman Emperor Charles V, but the Emperor could not find the courage and the opportunity to help Ismail. Disappointed, he dedicated his remaining lifetime to debauchery. He died at the age of 37 in the town of Serab, near Ardabil in 1524, not having time to see the defeat of the crusader army by the Ottomans in Mohacs.

Those who saw him described Ismai as a tall, beardless and handsome man with red hair. He was wise in politics and military affairs but was a dissolute person who was proud, vindictive and bloodthirsty. He wrote poems in Azeri, Persian and Arabic. One of the odes that he wrote in despair toward the end of his life is very famous. The ode goes: "This is called the bird of the heart, who cares the spring!"

The dynasty of Ismail, the Safavids, reigned over Persia for another 236 years. Their states were very powerful and highly cultured. However, they massacred hundreds of thousands of Sunni Muslims and made them convert to Iran Shiism. They formed alliances with Christian states to the detriment of the Ottoman Empire and spilled the blood of many Turkic people and Muslims, as he continuously waged war on Sunni Turkic states. They destroyed the spiritual structure of Turks by making a large Sunni Turkmen community convert to Shiism. They also forced many Turkmens to migrate to Iran, causing a decline in the population of Anatolia and pushed back the powers in Turkistan and enfeebled the entire region. Hence, they played a negative role in Turkic-Islamic history. They became Persian in time and if the Battle of Çaldıran had not been won, this would have also been the fate of Anatolia.
Last Update: Sep 04, 2015 2:04 am
RELATED TOPICS