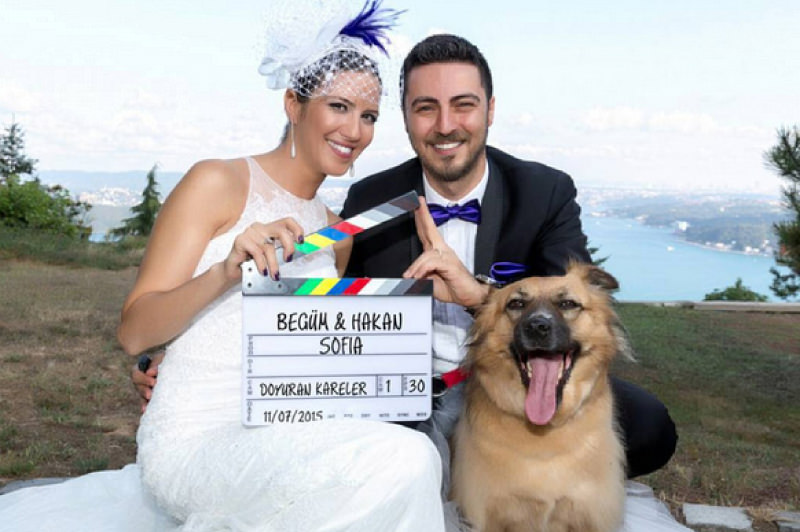 Photographer Savaş Çıkrak initiated a social responsibility project for street animals in which he takes wedding photos for couples in exchange for a donation of TL 1,500 for animal for shelters. In just four months more than 10 tons of food has been sent to animal shelters in exchange for his efforts

Photographer Savaş Çıkrak takes wedding photos for his project "Doyuran Kareler" (Photos Feeding Animals) in order to help street animals, as he started a social responsibility project that, instead of photography fees, asks couples to donate TL 1,500 ($494) toward animal food for shelters. The couples not only commemorate their wedding day through Çıkrak's free photos, but they also have a chance to help street animals.

Speaking to Anadolu Agency (AA), Çıkrak said his wife Cahan and actress İdil Fırat are his project's biggest supporters. "I thought taking wedding photos to help street animals would be a good idea. There are many animal lovers who get married and need professional photographers," he said. Çıkrak said animal lovers love this idea, as they are able to help street animals.

Fırat is influential in introducing the project to a larger audience. "My project is only four months old, but I have received 50 requests so far. The number is increasing and now I am thinking of how to respond to all the bookings," he said.

Çıkrak said his project is not limited to animal shelters based in Istanbul. For the last four months, more than 10 tons of food was sent to animal shelters in different parts of Turkey. He even said he received a request from Lebanon. "My project transcended the country's borders and I traveled to Lebanon for a wedding photo shoot. I am happy to engage in a photography project that is attracting such a large audience," he said.

Interested couples can contact Çıkrak through social media. "On our website and social media platforms, we give the necessary details about the project. Couples do not send money to us, but instead they buy animal food on the Internet and send it to any animal shelter via cargo service," Çıkrak said. After the animal shelter receives the food, he schedules the wedding photo shoot. He stressed that everything is closely monitored, adding: "We ask for photos from the shelters to verify that the donation was sent. Following wedding ceremonies, we share wedding photos and photos sent from the shelters on our website." As Çıkrak thankfully receives many requests, he said he needs the support of other professional photographers. If more photographers are willing to take part in the project, more donations can be made, especially during the summer, as it is a hectic period due to the high volume of weddings.

Fırat expressed her happiness to be a part of Çıkrak's work as an animal lover, and said the project contributes to raising awareness about the condition of street animals. Underscoring that street animals strive to survive in very harsh conditions, Fırat said: "This project is helping the public become more sensitive to the needs of these animals. The project offers beautiful wedding photos to newlyweds while feeding animals in shelters. Moreover, the project not only consists of wedding photography but also other photo shoots with different concepts."

Begüm and Hakan Oran, whose wedding photos were taken as a part of the project, said they are very happy to contribute to such a good cause. They said they heard about the project online. "We wanted to be a part of it as soon as we saw it on social media," Begüm Oran said. "We have three cats and a dog. We were going to have our wedding photos taken elsewhere, but we thought it's a better alternative to help street animals instead. We are very happy that we paid for our photos with animal food. Moreover, our wedding photos turned out more beautiful than we expected. We are already in line to do the same for our child's birth. Our friends who learned about this project want to be a part of it as well."
RELATED TOPICS