Racing against threat of militants to document Syria's heritage 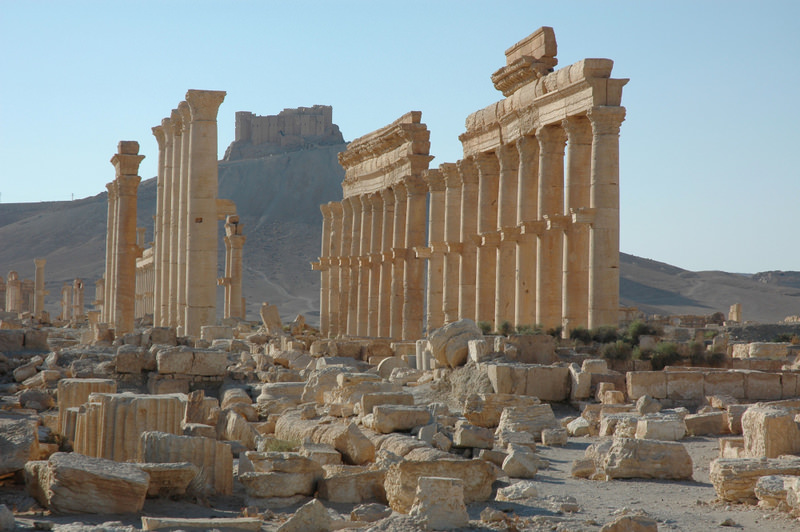 The ancient Syrian city of Palmyra, which had survived for nearly 2,000 years, was the latest heritage building to fall victim to the Syrian war, as it was destroyed last month by ISIS.
by Associated Press Sep 28, 2015 12:00 am

The Million Image Database project, which is backed by UNESCO, aims to document the ancient monuments of Syria with easy-to-use 3-D cameras in as great detail as possible so that if they are destroyed, they can still be studied in the future or accurate replicas could be built

Scientists are slipping 3-D cameras into Syria to local activists and residents to scan antiquities. A U.S.-funded project aims to provide local conservators with resources to help safeguard relics. Inside Syria, volunteers scramble to document damage to monuments and confirm what remains.

The rush is on to find creative and often high-tech ways to protect Syria's millennia-long cultural heritage in the face of the threat that much of it could be erased by the country's war, now in its fifth year. Giving the drive new urgency, experts are desperate to stay a step ahead of the Islamic State group, which has ruthlessly destroyed and looted sites that fall into its hands as it spreads across Syria and neighboring Iraq.

The efforts are tempered by a recognition of the realities that in some cases the best that can be hoped for is to document ancient monuments in as great detail as possible so that if they are destroyed they can still be studied in the future, or possibly accurate replicas could one day be built. All acknowledge that nothing short of a military or political solution can stop the danger posed by the militants and the conflict.

The campaigns are also fraught with risks. Getting supplies to activists on the ground can expose them to retribution from IS militants or others suspicious of outside powers. As a result, the various efforts underway are mostly cloaked in secrecy, with their organizers reluctant to give specifics on their activities for fear of endangering those on the ground.

But among experts, there's a feeling that something anything must be done.

"I don't want to be having this conversation with somebody three years down the road, and they say, 'Gee why didn't you start in 2015 when they (IS) only controlled three percent of the sites'," said Roger Michel, whose Million Image Database, an Oxford ınstitute of Digital Archaeology project, began distributing hundreds of 3-D cameras around the region to activists.

Historical sites have been damaged constantly since the war began, struck by shelling and government airstrikes or exposed to rampant looting. Syrian government officials already say they have moved some 300,000 artifacts from around the country to safe places over recent years, including from IS-controlled areas.

The Islamic State group's advances mean antiquities in Syria and ıraq face the danger not just of damage but of intentional eradication. The most stunning example came in the past month, when the militants blew up two famed temples in the ancient Syrian city of Palmyra. Satellite images showed that the two temples, which had survived for nearly 2,000 years, were reduced to rubble.

The Million Image Database project, which is backed by UNESCO, aims to "flood the region" with low-cost, easy-to-use 3-D cameras, delivered to activists to document antiquities in their area, Michel said. The point-and-shoot cameras, which cost about $50 each, take a stereoscopic image of the relics, with a granularity of detail measured in centimeters.

"The idea is to have as many images made of as many objects and buildings as possible in advance of the destruction by the IS forces," Michel said. Nearly 1,000 cameras have already been deployed or are on their way, not only to Syria, but also ıraq, Yemen, Afghanistan, Turkey, Jordan and Egypt. The aim is to distribute 5,000 cameras region-wide by next year, at a total coast of $3 to $6 million.

The camera user can then upload the pictures or videos to the project's website. The website is closed to the public to protect the activists' anonymity and to ensure the site remains a purely scholarly venture, not a social media platform for activists, said Alexy Karenowska, a physicist who developed the web interface and is the project's technology director. As the project progresses, it will find a way to share storytelling from the material to the public, she said.

The project has also linked up with a leading Chinese 3-D concrete printing company to consider eventually reconstructing some of the architecture that has been destroyed.

A separate project would carry out far more detailed scans of antiquities in Syria and ıraq using laser scanners. The scanners bounce lasers off the surface of objects in the field, measuring millions of points a second to create a data set known as a point cloud. The data can be used to create 3-D images accurate to two or three millimeters to create models or virtual tours of the sites or allow full-scale reconstructions.

But while the scanning brings the highest precision, it also requires experts, accompanied by security teams, to visit the sites to scan them over extended periods of time using precise equipment a much more unwieldy footprint in potentially dangerous areas than the 3-D cameras.

The project, called "Anqa," the Arabic word for the phoenix, the legendary bird that rises from the ashes, aims to laser-scan 200 objects in Syria, Iraq and other parts of the region, said its director Ben Kacyra, of the California-based scanning non-profit CyArk. It will work with the government antiquities departments in Syria and ıraq, as well as UNESCO, to deploy teams in northern and southern Iraq, Damascus and other areas, Kacyra said. For security considerations, he would not specify what sites he plans to scan. "We have a story to tell there that we can't lose for our children and grandchildren," Kacyra said. "Our heritage is much more than our collective memory. It is our collective treasure."

Kacyra, an engineer originally from the Iraqi city of Mosul, and his wife set up CyArk to digitally preserve heritage sites around the world after the 2001 destruction of the Bamiyan Buddhas in Afghanistan. One site he scanned, the Kasubi royal tombs in Uganda, were torched in 2010, and now the government is using his imagery to reconstruct them. After Mosul fell to Islamic State group control in 2014 and the extremists began destroying antiquities there, Kacyra focused on documenting heritage in the Mideast.

Another campaign is taking a more low-tech approach aiming at directly protecting at least some sites. The project, by the American Schools of Oriental Research, provides supplies and funding to local experts and volunteers for things like crates to store artifacts or sandbags to pack around unmovable structures to give some protection against shelling or bombs, said LeeAnn Gordon, project manager for Conservation and Heritage Preservation at ASOR, which receives U.S. State Department funding.

"What we are really looking for is these kinds of small projects that can have big impact," Gordon said. "Syria has so much. In my opinion, there is still more intact than there is destroyed." But, hemmed in by the U.S. policy toward Syria, the initiative can't fund government efforts or governmental groups, leaving it fewer options in a country divided between government-controlled, rebel-held and ıS-held areas. ASOR is also using satellite images to track destruction of antiquities.

In one those rebel-held territories, little technology or resources are available to Suleiman al-Eissa, a history teacher who is now leading a self-created "revolutionary" antiquities department to protect the Roman-era ruins in his hometown of Busra Sham, one of the six UNESCO World Heritage sites.

Busra Sham, in the southern Daraa province, fell to the rebels from the Free Syrian Army in March, who formed a battalion to protect the city's ancient site from looting and further damage. Al-Eissa is currently documenting what has been damaged in the city and what remains, to account for the looting that took place when the town was government-controlled.
RELATED TOPICS