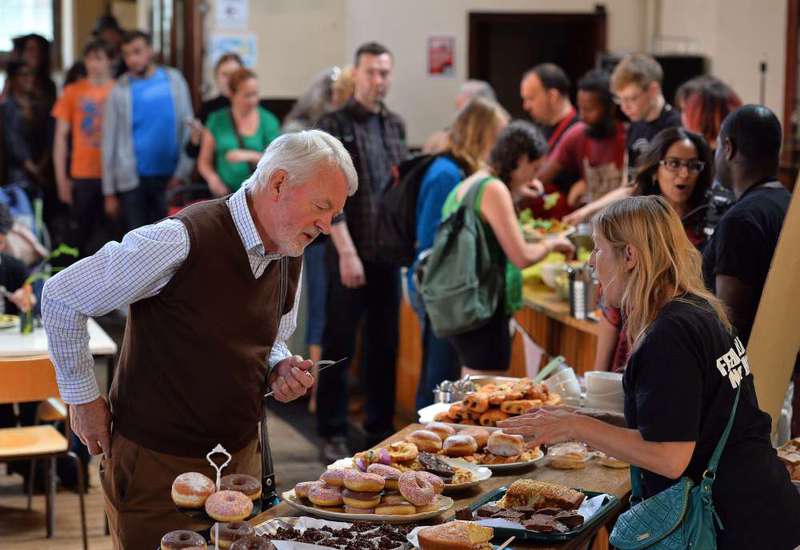 The Real Junk Food Project collects food, which is past its often arbitrary ‘sell-by date' and unsellable under law, and turns it into perfectly edible meals by sidestepping food regulations. The organization now has 120 affiliated cafes around the world, including cafes in Australia, France, South Korea, the U.S. and, most recently, Nigeria

When former chef Adam Smith opened a small cafe in Britain's industrial north two years ago, serving up dishes with food destined for the scrap heap, he had big aspirations: To fight global food waste.

"From day one I set out to feed the world and I intend to do that," the Yorkshireman ambitiously said, as he charted the growth of his ethical empire, the Real Junk Food Project (RJFP). From its humble roots in a community center in the deprived Armley district of Leeds in northern England, the project now has around 120 affiliated cafes around the world, including in Australia, France, South Korea, the U.S. and, most recently, Nigeria.

"People are beginning to realize we are a serious Organisation," Smith said, having just returned from an awareness-raising event feeding ministers of parliament in London with food saved from garbage bins. The simple concept involves collecting food that would otherwise have been thrown away – usually because it is past its often arbitrary "sell-by date" and unsellable under trading rules – and turning it into perfectly edible meals.

Since the project began in December 2013, almost 200 tons of food has been "intercepted," Smith said. Roughly one third of the food produced in the world for human consumption every year – approximately 1.3 billion tons – gets lost or wasted, according to the U.N. By offering meals on a "pay-as-you-feel" basis, RJFP cafes sidestep food regulations since it is against the law in the U.K. to actually "sell" food past its sell-by date. Smith's formulation is tantamount to a voluntary donation, with the amount up to the customer, which keeps the operation in compliance with the law, he said.

Meanwhile, the team discriminates against the food, as not all food is accepted. "We make our own judgement, by tasting and smelling, as to whether food is fit for consumption." Smith is clear that his vision was not about feeding only the impoverished, but it is a way of reaching those with low incomes in many communities.

Helped by around 90 volunteers, retiree Shena Cooper runs "Elsie's" cafe in the town of Northampton in central England as part of the RJFP network. "We want to create a mixed society within the cafe," she said. "Some people come in for coffee and cake and give a few pounds. But there are people who cannot give anything."

Volunteers face the challenge of creating tasty dishes from whatever food is available, but this is "part of the joy for them," said Cooper. At Elsie's "binner" event this month, a guest chef transformed discarded local produce into a three-course feast of gourmet crostini with pear salsa, sausage plait with polenta cake and a chocolate fig dessert. "You can actually have a conscience about eating cake," joked Heike Mapstone, a call center worker, after the dinner. "I think it is a great idea. Why should we waste all this food?"

Cooper knows her cafe is only "scraping the tip of the iceberg" but hopes collective efforts will "expose the food system for what it is." "There is so much wrong with it," she said. "The fact that we can fly bananas half-way around the world and then throw them into a landfill is ridiculous."

Adam Buckingham feeds some 200 people a week at a church-based RJFP cafe in Brighton, where food donations have included legs of cured serrano ham and huge stockpiles of chocolate. "It shocks people that all this food would have gone in the bin," he said, adding that a change in attitudes and legislation is needed. "Unfortunately, we have got to a point where we think it is OK to throw away food and buy more. We're blinded by convenience."

In north London, a pair of entrepreneurs have harnessed what they believe is a growing aversion to this mindset. Tessa Cook and her American business partner Saasha Celestial-One launched a new app – Olio – to connect consumers with sources of surplus food. The app allows donors to upload pictures of items that may be nearing their sell-by date and users can browse for food and arrange a pick-up via private messaging.

"We did some market research and found that one-third of people were 'physically pained' throwing away food. To me that was mind blowing," Cook said.

So far the pair have signed up 15 "founding merchants" – individuals and businesses willing to share produce. Although currently focused on London, Cook hopes the app will eventually go global. "The more we looked into it the more we were overwhelmed by the sheer enormity of the food being wasted. It seems totally wasteful, irresponsible and immoral," she said.
RELATED TOPICS