The hajj journey of black Americans 50 years after Malcolm X 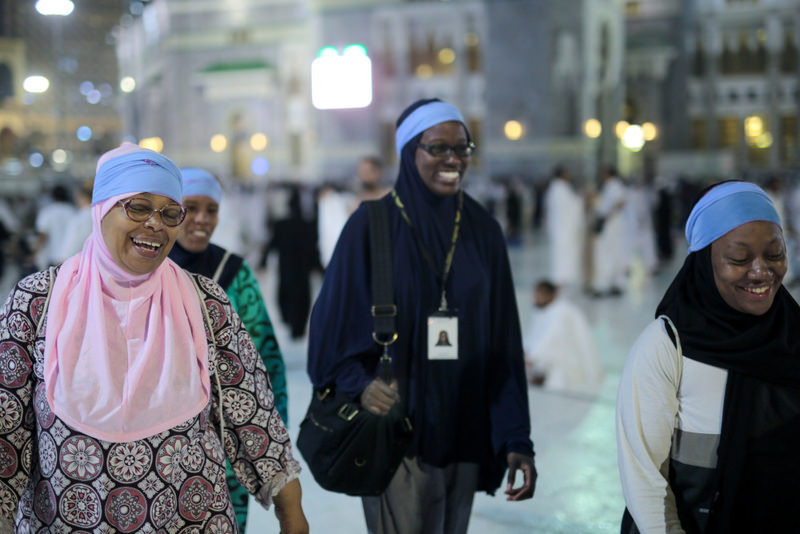 For black American Muslims, this year's Hajj brought a significant landmark, the 50th anniversary of Malcolm X's death, coming at a time when the debate over race in the United States is at its most heated in decades. He underwent a transformative experience on the Hajj, seeing the potential for racial coexistence

As Shahidah Sharif, an African-American Muslim, joined millions of fellow pilgrims from around the world on the hajj this year, she felt a renewed connection. To her own "blackness," she says, but also to humanity as a whole.

"When the human family becomes more important than just myself and my needs, nothing can get in the way of building relationships," she told The Associated Press in Mecca. "ıt doesn't matter if we have different faiths, different races, different nationalities, I can find something in common with you."

For American black Muslims, this year brought a significant landmark, the 50th anniversary of Malcolm X's death. A year before his assassination, Malcolm X underwent a transformative experience on the hajj, seeing the potential for racial co-existence after witnessing, as he wrote, pilgrims "of all colors displaying a spirit of unity and brotherhood that my experiences in America had led me to believe could never exist between a white and a non-white."

This year's hajj, which ended Saturday, came at a time when the debate over race in the United States is at its most heated in decades, with the Black Lives Matters movement arising after the deaths of a number of black men at the hands of police were captured on camera and seen widely by the public.

The AP spoke with a number of African-Americans about their hajj experience. For Muslims, the pilgrimage is not just a duty, it's a moment to reflect on oneself and on community. It's an intensely personal experience. In ıslam, each pilgrim presents him or herself directly to God, seeking forgiveness of sin, while performing rituals that include circling the Kaaba, the cube-shaped structure in Mecca. At the same time, it's communal: more than 2 million pilgrims performing the same rites, underscoring unity and equality.

The scale is exhausting. The population of a city packs into tents, walks simultaneously from site to site in the desert in broiling heat for five days. A stampede this year that killed at least 769 pilgrims underscored the dangers of the crowds.

For the African-Americans who spoke to the AP, all those factors weighed on how hajj affected their faith and their sense of community back home in America.

Sharif draws inspiration from Hagar, the wife of the prophet ıbrahim Abraham, as he's known in the Bible. ın ıslamic tradition, Hagar and her son ısmail the Bible's ıshmael were left in the desert at what is now Mecca, and Hagar ran through the hills searching for water for her thirsty child until God opened the spring of Zamzam. Pilgrims re-create her search in a hajj rite.

For Sharif, the mother of two young children, it's a lesson in sacrifice. "Who am ı in this scheme of history that I can't make a sacrifice for the greater good, in particular for our community?" she said. The hajj helps make her a better American, she said, by instilling her with compassion.

The 38-year-old Sharif and her husband, Suleimaan Hamed, run Hajj Pros, a company based in Atlanta, Georgia, organizing hajj trips. This year they came with more than 30 African-Americans. Her parents were members of the Nation of ıslam, but like Malcolm X, they moved to more mainstream Sunni ıslam. Still, she says current activists can learn from the Nation of ıslam of the 1960s.

"We need to remove the idea of seeking permission from someone to give us what's inherently ours," she said. "No one needs to validate who we are. We know who we are, and we're inherently created by God."

"Pack your patience, and wear it," Sharif's husband Hamed always tells the American pilgrims he guides. Patience is key to dealing with the crowds. Another piece of advice: "Take off your American glasses."

"We see everything through the lens of America, and those glasses are dirty. Everything's racism, everything's oppression," he said. While he says this is the reality in the U.S., he says there are other cultural factors that could be at play in Saudi Arabia during the hajj.

For him, hajj provides a model in Abraham, who in ıslamic tradition built the Kaaba. "All the lessons for life are in him ... how to build a community," said Hamed, who is also the imam, or preacher, at the Atlanta Masjid mosque.

His final advice to pilgrims: Trust that God "has an experience for you as an individual in the midst of 3 million people ... He has something for you individually."

Praying in the Grand Mosque housing the Kaaba with people from all over the world, Jamila Rashid felt "how beautiful the human family is and that you're all essentially human beings."

But, she added, that can be "a little dangerous."

"It can lull you into thinking that color doesn't matter, that race doesn't matter and that our goal should be to be color-blind," she said. Everyone "has their own story ... their own struggle," she said, "so if we as black people aren't going to stand up and talk about the fact that our lives matter just like everybody else's, who's going to do that?"

She's glad Americans are talking about race, though with so much of it on social media, she's concerned how much depth it has.

She said a lesson must be taken from the earlier generation, when the civil rights movement had clear demands. "Okay, black lives matter, so what are we asking for?" she said.

Rashid describes herself as "a minority trifecta": A woman, an African-American and a Muslim. She brings those perspectives into her work in Atlanta, as founding director of My World, a non-profit that teaches teens leadership skills and cross-culture citizenship.

Having just turned 40, she says the pilgrimage builds her "spiritual muscles" for whatever comes next, so "ı'm really able to perform my purpose, understanding that God does not give you more than you can bear."

At 66, Habeebah Muhammad Abdul-Wali has lived through many phases of the civil rights struggle.

When Martin Luther King, Jr. was assassinated in 1968, she marched in protests. She was in the Black Power movement. And in 1972, she converted and joined the Nation of ıslam, though now she's a mainstream Sunni.

She says "history is repeating itself" with the current protests in the U.S. But, for her, there's a difference: Back then, she saw greater seriousness, greater sincerity.

Seeing stories of young black men killed by police makes her stressed. "I just turn to Allah to give that calmness."

Now on her first hajj, the retired school-teacher sought to "purge" herself of negativity and become a more patient, kinder person "because I'm getting over the hill, now it's my time. ... ı want to try to be good, stop making frowns."

She talked about the hardships of the pilgrimage, of sleeping one night outside on the ground, of sharing bathrooms with strangers. "Allah is showing me that everybody is not the same, so you have to learn to tolerate people."

As she circled the Kaaba, she thought, "This is what Malcolm X must have experienced, seeing people from different walks of life ... and I just said 'Wow, Allah chose us to be here in this circle of İslam."
Last Update: Oct 03, 2015 10:55 pm