Slavery and Islam: A transformative meeting 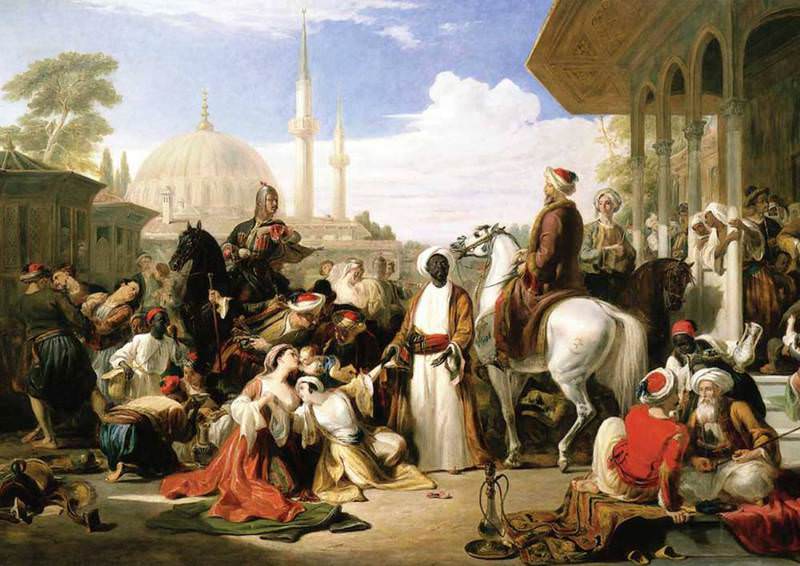 The Ottoman society did not humiliate slaves for their status and showed them respect.
by Ekrem Buğra Ekinci
Nov 06, 2015 12:00 am

Slavery has existed in different civilizations over millennia. With the arrival of Islam, the institution of slavery was rehabilitated and many slaves were set free. During the Ottoman-era, slaves were trained as professional soldiers and statesmen

Slavery emerged as a result of the domination of the strong over the weak. Aristotle characterized slavery as "a tool with a soul, a living object." He said some people could only achieve a certain level of living through slavery due to their innate weaknesses.

Slavery was a common institute in all societies during the Archaic Age. A person who could not pay his debt could be enslaved and people could also sell themselves or their children as slaves to other people. Canonical law did not propose any reformative provision for slavery and was satisfied with recommending the absolute obedience of slaves to their masters. Some statements on the Bible were even interpreted as there are certain people who are natural-born slaves to others. Therefore, black people who are believed to be the decedents of Canaan, the grandson of the Prophet Noah, were enslaved. Slaves were put to the hardest works in the old societies; they spent their lives enduring whips and countless other tortures, deprived from right and even social status.

When Islam came down, the mankind was in this state. Islam reformed this institution which is the result of war law. The legal and social conditions of slaves were rehabilitated. Certain precautions were taken to abolish the institution of slavery and it was made legal only as a result of war. Hence, this new law weakened the combatting power of the enemy and prevented more killings during wars. Slaves replaced the manpower of soldiers and prevented recession of production economy. What is more, slaves were seen as potential Muslims. There was nothing more natural than Muslims making slaves out of war prisoners during a time when slaves were killed or enslaved. The international relations depend on the rule of reciprocity. The practice of enslaving free people outside war -as it is seen in the West- and selling them in Islamic countries is not legal.

Slavery is only one of the cases that limit legal capacity in Islamic law. For the first time, Islam dictated that slaves are human beings and all people are equals before Allah; thus, ill treatment to slaves was banned. The masters were made obliged to offer the same food that they eat to their slaves as well as meet their need for clothes and shelter, teach them how to read and write and other necessary sciences and treat them as a member of the household. The Prophet Muhammad ordered people to call their slaves as "my son / daughter" instead of "my slave". Books on morals featured articles informing on how to treat slaves.

Islam rehabilitated the condition of slaves so well that the slaves who were set free did not want to leave their masters. Zayd, the freed slave of the Prophet Muhammad, refused to go with his parents when they found him and preferred to stay with his former master. The Prophet Muhammad who addressed Zayd as "my son" married him off with the daughter of his aunt and made him the commander of his armies. The Second Caliph Umar is famous for letting his slave ride his camel while entering Jerusalem, which was conquered with peace, as they were taking turns on camel and it was his slaves turn.

From the point of view of criminal law of Islam, there is no difference between a slave and a free man. A man who kills a slave is punished as if he killed a free man. However, the slaves are in a better condition than free men when it comes to punishment. The religious responsibilities of slaves were also less than other people. Slaves were not obliged to adopt Islam and were allowed to wear and pray like their co-religionists. As opposed to the West, a child born from a master's slave was free and also his birth gave the mother freedom. If a master tortured a slave, then he used to be punished and the slave was set free.

The emancipation of slaves is one of the most virtuous good deeds in Islam. The Prophet Muhammad set free all slaves he had and recommended others to do the same. Aside from voluntary emancipation, some provisions came into force to set slaves free through either on a legal basis or ipso facto. For instance , a person committing a crime must be set free a slave. A certain number of slaves were bought and then emancipated by the state each year. A slave that was set free cannot return this status again.

Islam also allowed slaves to learn different sciences. Through this practise, many great scholars, who were formerly slaves, emerged. In contrast, it was forbidden to teach reading and writing to slaves in earlier civilizations and even European and Anglo-Saxon system until recent times.

All slaves were looked after well and did not serve except for housework. The minimum amount of alimony offered to slaves was specified by law. The government used to control whether the alimony was sufficient and given in time. In the Islamic world, slaves were seen as friend, confidant and a family member of the master and were never beaten. There were a number of punishments for masters behaving badly to their slaves in the Ottoman criminal law. Historians agree that the Ottomans showed the best attitude to slaves and greatly facilitated their freedom. Many authors including Baron de Tott, Marechal Helmuth von Moltke and Mouradgea D'Ohsson wrote that slaves in the Ottoman Turkish community were far better than those in Europe, even beyond comparison.

In the Ottoman Empire, slaves were raised as professional soldiers and statesmen. Many of them became senior bureaucrats and even married to the sultans' daughters. Ottoman sultans also preferred to get married with slave girls brought to the palace. The society did not humiliate slaves for their status. When they turn a certain age, they were set free with some money. Female slaves also got married with reliable men with dowry before their marriage age passes. Considering the period conditions, poor societies, notably Russians wanted to be captured by Turks and became their slaves; the slaves in the Ottoman Empire enjoyed many blessings that they could not see in their homeland.Such provisions not only improved the conditions of slaves and made things easier for them to win their freedom. These also influenced other systems, facilitating the abolishment of slavery. The Ottoman Empire was the second country that prohibited slavery trade in 1846. The sultanate also agreed The Brussels Conference Act of 1890 abolishing African slave trade.

In Europe, slaves did have nearly none humanitarian rights and used to work at highly demanding jobs. Following the French revolution, the number of white slaves decreased in Western Europe. Still in Russia, there were millions of white slaves. After the discovery of America, millions of black people from Africa were brought there instead of locals who were unfamiliar to agriculture. Nearly 80 percent of them were died on road due to harsh conditions. They were worked for death to prepare the prosperous future of America.

After the industrial revolution, it was more adventous to employ a worker for their board instead of having a slave family. Upon this, slavery was first abolished in the U.K. in 1832 followed by France in 1848, Portugese in 1858, Russian and the Netherlands in 1863, the U.S. in 1865 after the Civil War, Brazil in 1888 and Iran in 1929. Slaves who were set free became the workers of their former masters with a little income and their slavery continued de facto. Adapted by the U.N. in 1956, the Supplementary Convention on the Abolition of Slavery was signed by Turkey in 1964.
Last Update: Nov 06, 2015 2:08 am