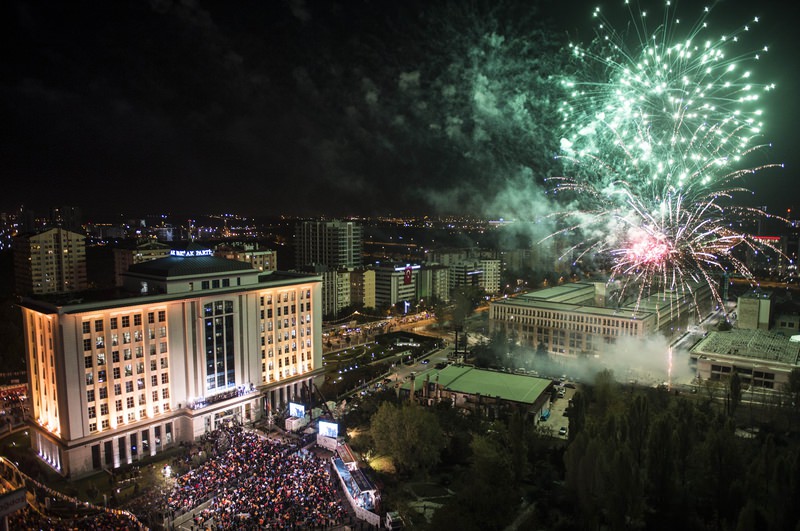 The election in Turkey last Sunday generated a great deal of interest in the press, both before and afterward. Before the election many media outlets, Turkish and foreign, were convinced that this election would be the nail in the coffin of the AK Party. Indeed, it seemed only logical. How many parties can rule for three terms in succession without tripping up? The AK Party and PM Davutoğlu seemed doomed to failure, or at least it was clear that their share of the vote would be reduced enough to ensure a coalition

Not one single poll predicted last Sunday's results. After the failure to predict the British elections and this failure in Turkey, are we facing a time when polls no longer function as good predictors of what the electorate will do, or is there another cause for these unexpected results?

In an earlier article I discussed a debate held by Tim Sebastian at Bosphorus University. The topic of the debate, "Is Democracy in Turkey in Grave Danger?" was one that made me pause to think. It would have been impossible for me to answer this question in the affirmative, and equally difficult to answer it in the negative. I did not and do not think democracy in Turkey is in danger at all, grave or otherwise. But that choice was not given to the audience. By approaching the matter with a preconceived idea, the expanse of the debate was immediately limited.

Yesterday Carnegie Europe posed another question. Can democracy be rescued in Turkey?

Coming on the heels of the Justice and Development Party (AK Party) sweeping victory on Sunday there is only one conclusion that a reader of this question can arrive at. The Turkish elections were not democratic and Turkey is on the verge of becoming a dictatorship; Europe must throw the poor Turks a lifeline to save them from the more than 49 percent who voted in this undemocratic election, voting into power an anti-democratic party.

On Sunday night I received a mail from a journalist friend of mine. He asked me one question: Why did we get it so wrong? He was truly puzzled. He had talked with a wide range of people, from every political persuasion. He thought that the Justice and Development Party (AK Party) would win, but that there would probably be a coalition. He had never predicted that the AK Party would attain a majority, with such popular support.

The answer to his question is simple. The Western media got it wrong because they had been asking the wrong questions. They had come onto the scene with preconceived perceptions that were not born out by reality. There was a general assumption that the government of Prime Minister Ahmet Davutoğlu was undemocratic and that it was being bullied by President Recep Tayyip Erdoğan. The received wisdom was that many of the voters who had elected the AK Party in 2011 had become disillusioned, and as a result had not voted for the party in June, and would not vote for the party on Nov. 1. Only the uneducated reactionary voter would vote for a party that was so undemocratic. The premise was that educated people wanted democracy and that there were enough of them to vote for other parties, the Republican People's Party (CHP) and Peoples' Democratic Party (HDP), thus leading to a coalition.

And they were wrong. The results on Nov. 1 were only slightly less than those received in 2011. What had happened?

The terrorist attacks, by two active terrorist organizations - the PKK and Islamic State of Iraq and al-Sham (ISIS) - which occurred after the inconclusive June elections created a feeling of instability in the country. People were reminded of the instability of the 1990s, when one coalition followed upon another. This was a time when many lives were lost to PKK attacks, and it was a time in living memory of much of the electorate. While the opposition tried to drive home the message that a coalition government would help heal polarization and ensure better government, the AK Party promised stability and further reforms. The people chose stability and reforms, going with the known rather than the unknown.

The AK Party was victorious because voters left the other parties. The Turkish Nationalist Movement Party (MHP), which openly refused to participate in a coalition, lost a great deal of ground. The Kurdish nationalist HDP, despite trying to distance itself from the terrorist organization, the PKK, lost support due to the violence wreaked on the nation by the latter.

The violence that occurred with the breakdown of peace talks disrupted the areas that had previously supported the PKK. Many small businesses in the southeast of Turkey had to be closed down, causing economic harm, and people lived in fear. In certain towns the PKK dug trenches, buried mines and erected barricades. Security forces fought them and curfews were imposed to keep the civilian population safe. Quoted in The Guardian, a man named Mahmut, 45, said: "Of all the five people in my family, I was the only one to vote for the HDP this time. All the others didn't vote at all, they were so fed up. All of us had voted for the HDP in June."

In Hürriyet, a paper that until Sunday was virulently anti-AK Party, Murat Yetkin writes "...the level of decrease in HDP support was not...predictable...The resumption of the attacks by the PKK is a reason, as well as the PKK's policy to unilaterally announce "autonomous regions" in HDP-held municipalities, which alienated some HDP supporters...."

There was an increase in turnout, from 85 percent to 88 percent; two parties, the MHP and HDP, lost a total of 3 million votes, and as the Republican Party (CHP) gained minimal ground, it is clear where these voters went.

There are still veiled accusations that Erdoğan had somehow designed the attacks by the PKK and ISIS to create instability in the country, thus ensuring the election. One need only examine the time line of how the peace talks failed and the subsequent attacks to understand that this does not reflect reality.

On July 20 there was a horrific bomb attack in Suruç, an event that claimed many innocent lives. Two days before this bomb attack, Bese Hozat, a senior member of the Kurdish Communities Union (KCK), the mouthpiece of the PKK, stated that "the new process is the process of revolutionary people's war." On July 19, 2015 a leading PKK figure Cemil Bayık called on "the nation" to take up arms and defend themselves. On July 22, 2015 the PKK murdered two Turkish policemen while they were sleeping in their beds in Ceylanpınar; it was announced that this murder was carried out in revenge for the Suruç attack. On the same day, two police officers were ambushed by the PKK, and one lost his life. (The police were answering a call to a bogus traffic accident). On July 23, 2015 Bese Hozat declared that "the cease-fire is now out of question and there is a de facto full scale campaign against Turkey." Two days later the PKK's military wing declared that "the conditions for maintaining a cease-fire with Turkey no longer exists."

So, from this timeline we can understand better how the conflict with the PKK started. It was not some devious plot by the president or the prime minister or the party. Rather, the PKK took advantage of a temporary government, at a time when the politicians were trying to figure out how to move ahead, to unleash war on the country. And it should not be forgotten that the PKK was not the only terrorist organization to be active in their attacks on Turkey. ISIS had also declared war against Turkey.

At the end of the day, in the words of Ahmed Davutoglu, the leader of the AK Party and the prime minister of the country "..although there are parties that lost...not a single citizen lost the election. Turkey woke up to a peaceful day today. All Turkish citizens have won. This is the victory of the nation."

The long and short of it is that a few things happened from June to lead to the results of November. The PKK launched war on the Turkish state and the Turkish security forces fought back, doing their best to defend the nation. The AK Party understood that they had made errors in the earlier election and included more Kurdish candidates and conservative-nationalist Turks on their electoral lists. Their election promises changed, now not focusing on a presidential system, but on security and democracy, and promising more reforms that would directly affect people's lives.

Why the media misread this is that they were not focusing on what the party was promising or on what people understood from the party's messages. The people want greater inclusiveness and a stable environment that will support greater economic growth. The people want reforms and they want the democratization process to continue.

The media did not hear this message, but rather tried to read Turkey according to other countries. Yet, to try to compare Turkish democracy with British or American democracy is blatantly unfair. American democracy has been around for 200 years. But until a much more recent time there was not full universal suffrage. And the voices of "all" are still not really being heard - if so, would there be a need for "Black Lives Matter"?

In Britain democracy has also progressed slowly, with a history dating back to the Magna Carta. Full universal suffrage is about a century old. Yet now British Muslims are worried about their rights, finding themselves forced to choose between their faith and their national identity.

The Turkish electorate understand that a democratization packet can only come in a country that does not yet have full participatory democracy and can only be introduced by a government that is committed to bringing such a democracy to the country. The Turkish electorate understand that coalitions do not work in Turkey, mostly because political parties do not have policies, but only expend their breath to denigrate one another. In such a situation, no coalition has a chance to survive.

Democracy is relative, it is personal. What works (or doesn't work) in one country might not work (or not work) in another.

Before being concerned about how to save democracy, one should first determine whether or not the majority of people believe that their country has a system that reflects their wishes? If so then democracy is not in danger. If the government in question is committed to greater democratization, then there is hope for the country. The Western media needs to ask the right questions if they want to get the right answers and understand what is going on here.

What was forgotten was that Turkey's electorate are politically savvy; they also have a bad taste in their mouth left from former coalition attempts. They want a strong government, but one that is also committed to greater equality and greater democracy.
Last Update: Nov 07, 2015 4:41 pm
RELATED TOPICS