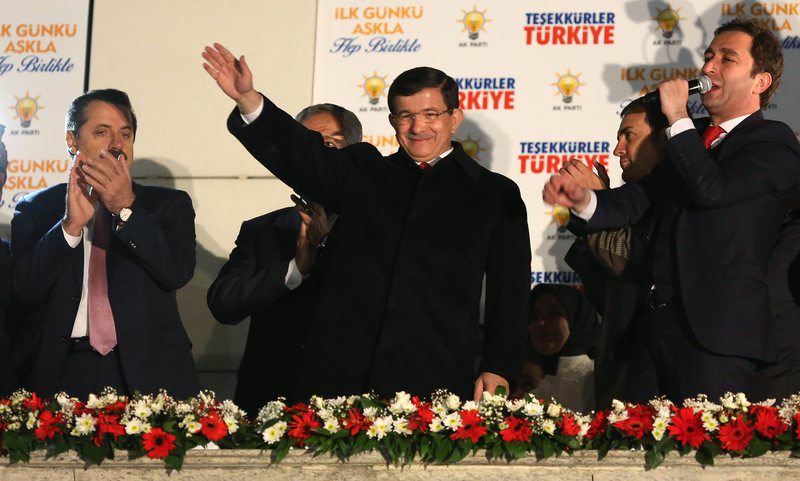 Prime Minister Ahmet Davutou011flu waves to supporters from the balcony of AK Party headquarters in Ankara, which has become a tradition after the party's successive wins.
by Ayşe Şahin
Nov 09, 2015 12:00 am

Turkey's snap elections on Nov. 1 resulted in an unexpected victory for the Justice and Development Party, which confronted outward pressure and campaigns against it. Predictions failed to forecast the outcome, yet experts now agree that voters thought strategically while casting their votes, showing that democracy functioned well

Nearly a week has passed since the elections with a slew of analysts, journalists and politicians still barely able to understand what lies beneath the strong comeback of the Justice and Development Party (AK Party) only five months after it was stripped of its simple parliamentary majority. The lack of clear analyses on Turkey's voting patterns suggests it is not possible to fully comprehend the vote swings over the last five months. But most experts agree such a realignment indicates that voters acted strategically rather than emotionally while casting their votes in the last two elections.

The fresh round of elections took place amid reservations that the outcome of the June 7 elections, which pitched Turkey into a hung Parliament, would change. Predictions forecasted only a slight rise in support for the AK Party and that it would still be short of the seats necessary to form a government on its own. But contrary to survey results, in a five-month span, the party increased its votes nearly 9 percent, receiving with 49.4 percent of the vote. The AK Party's overwhelming victory also shelved the dreary and inconclusive coalition talks for at least another term. It is hard to be optimistic about how the second attempt at forming an alliance between parties on the opposite ends of the political spectrum would turn out.

Western media outlets that covered Turkey's snap elections branded the results "unexpected." The opposition was also caught off balance as they were rolling up their sleeves for another round of coalition negotiations. The leaders of opposition parties opened the door ajar for a possible coalition in the wake of the elections and refrained from using a sharpened tone against the AK Party so as not to obstruct potential coalition pacts. However, it was not only dissidents who were bewildered at the rapid increase of votes for the AK Party, AK Party officials themselves did not think the outcome would come out as good, yet they were highly expectant about a majority that would let them assume sole power. 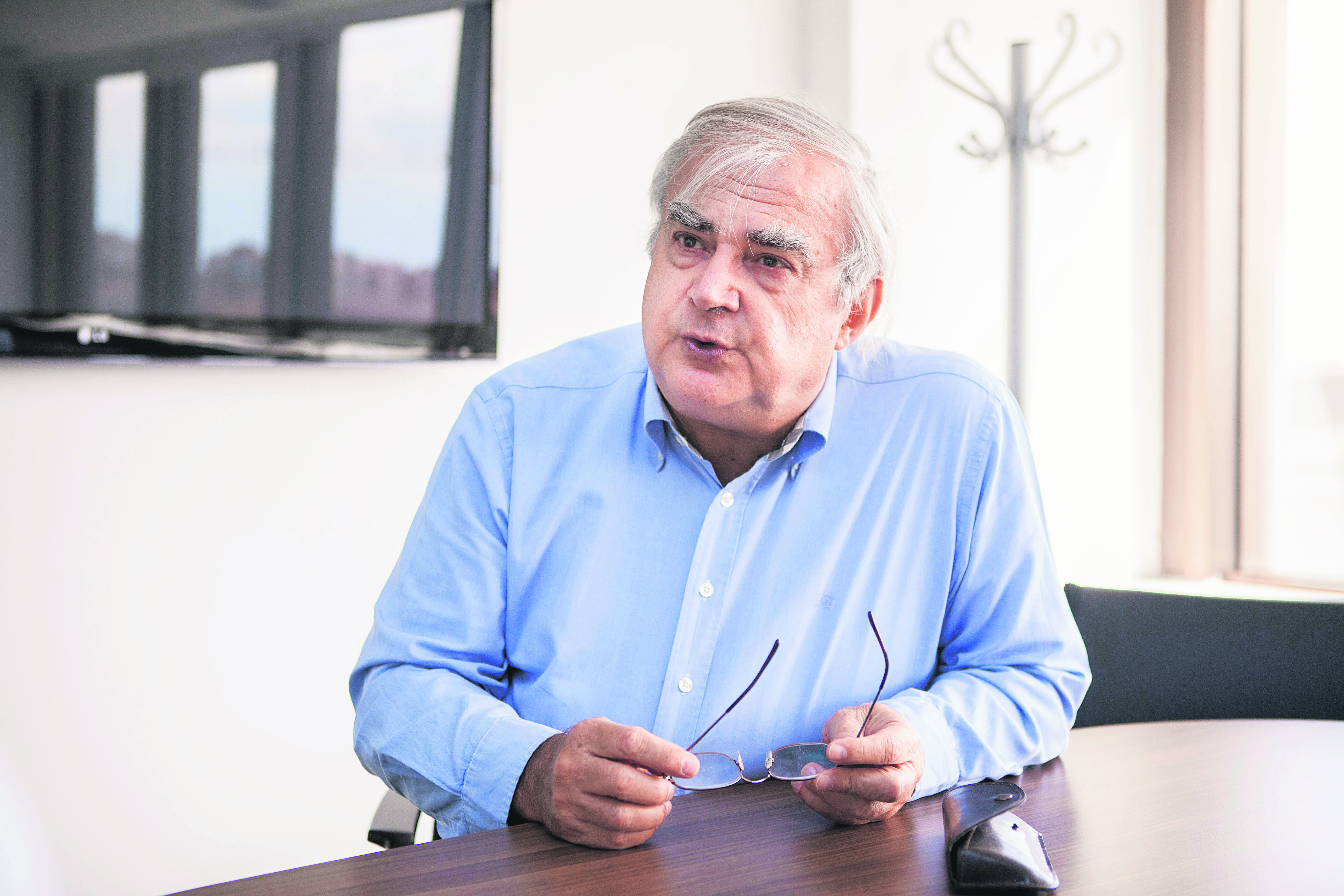 Professor Halil Berktay in his column published a day after the elections admitted that he failed - like the others - to predict accurately the outcome of Nov. 1, but still described it as a "fair justice."

"Over the past five months, a flexible and mobile section of the electorate appears to have lived and learned, through its own direct experience, that the AKP's [AK Party] failure to form a government by itself may have drastic consequences for peace and stability, especially given that the opposition promises nothing but negativism and destruction," Berktay wrote, explaining the unexpected outcome of the elections.

But the surprising part of the elections was not that it gave back the AK Party an outright majority in Parliament, since it is not the first time the AK Party has accomplished it, the surprising part was how it gained nearly half of voters' support when it lacked some significant portion of it merely five months ago. The success of the party has come at a time when it was confronted by massive outward pressure and a campaign against it, which complicates the situation more.

Berktay numbered in detail how the Western community and some inner circles tried to cripple the image of the AK Party in a five-month vigorous campaign and said:

"But so, what then happened? At what point are we inside all this cloud of disinformation, this piling up of contaminated knowledge and commentary? Democracy has functioned well."

In June, the AK Party received 41 percent of the vote, losing some 9 percent of the vote compared to the previous general elections in 2011. Although the party was still the winner of the elections and the support it gained was a sizeable chunk of the vote, June 7 was depicted by detractors as a huge failure for the AK Party. Some critical voices interpreted the picture as the beginning of the end, claiming that the party would continue to go downhill. However, such an approach lacked rationality as the AK Party had received an even lower percentage of the vote in the 2009 local elections, falling to 38.8 percent after the 2008 economic crisis, and were able to build up in the following 2011 general elections. Likewise, the AK Party recovered rapidly after June 7, as it assessed the message voters delivered at the elections.

Meanwhile, the opposition parties, which combined forces to enhance their ability to beat the AK Party in the June elections, failed to resume their determination in acting together later on. The three opposition parties, which were elated over the AK Party's failure to form a government alone after June 7, quite paradoxically failed to unite in the ensuing days and brought the coalition talks to a deadlock. Turkish voters, who do not have positive impressions of coalitions following years of instability and economic fluctuations, gave them a chance on June 7. Their failure to coalesce only helped the AK Party. That failure constituted one of the motives that sent voters back to the AK Party. Following a study on the voting habits of the electorate in Turkey, Ali Akarca, professor emeritus at the University of Illinois at Chicago, spotted that ideology in Turkey has not changed over the years, but strategic votes have been determinant in the last two elections. Voters did not actually change the party they liked most, but voted for a "second party" they felt close to in a bid to either punish or give a message to the main party they supports. "They behave this way to check the power of the ruling party," he explained.

"Voters who shifted to the HDP [Peoples' Democratic Party] on June 7 hoped to balance the too powerful incumbent party without toppling it while contributing to the peace process and democracy by keeping the powerless HDP in Parliament. However, immediately after the election they realized that the AK Party was not as strong as they thought and the HDP was not as weak as they thought. They had clipped the wings of the AK Party too much. Also, they had not anticipated creating a need for a coalition government, which they dread," Akarca said.

Indeed, a survey conducted a day after the June 7 elections underpins Akarca's analysis, as the survey found that if the elections had been held once again, the AK Party would have increased its votes around 3 percent.

The HDP, which received 13 percent of the vote and secured 80 seats in Parliament in June, passed the threshold by a hair's breadth in Sunday's election. Akarca believes it is because of the HDP's failure to detach itself from the PKK terrorist organization. "Conservative Kurds came to the realization that it is the AK Party and not the HDP that pushes for peace."

He also considers it significant that the AK Party managed to attract both Turkish and Kurdish nationalist votes in the Nov. 1 elections, which he said "shows the political skills of the AK Party and their lacking in the MHP [Nationalist Movement party] and the HDP."

As for the main opposition Republican People's Party (CHP), support for it remained more or less the same, around 25 percent, and the party chairman, Kemal Kılıçdaroğlu described the election results as a failure on the part of the CHP. "The criteria for success is coming to power," Kılıçdaroğlu said.

Currently the fourth party in Parliament, the MHP saw the sharpest drop in votes among all parties that made it into Parliament. It dipped from 16.3 percent of the vote to 12 percent, losing most of its votes to the AK Party. The MHP lost half of its seats from 80 to 40 due to many people believing the party's anti-everything position hurt political change. It turned down every coalition offer from opposition parties, a partnership with the AK Party, support for a minority government and taking part in the interim election Cabinet. The MHP went even further by refusing to take a common stance with parties against terrorism after the Ankara twin suicide bombing that left more than 100 people dead and hundreds more wounded.

Ersin Kalaycıoğlu, a professor at Sabancı University and an expert on voting behavior in Turkey, asserted, too, that voters gave strategic votes to bring stability to the country to dispel the "dire political circumstances of a wave of terror." 'The usual factors of the economic downturn, ideological/cultural solidarity, policy performances and the like did not seem to matter," he said.

Kalaycıoğlu said: "The mindboggling recalcitrance of [MHP Chairman Devlet] Bahçeli in not participating in any coalition government seemed to have turned off some MHP voters who then voted for the AK Party, which shares a similar ideological position in the minds of voters anyway. The rising incidence of terror and armed conflict in the east of the country seemed to have contributed to the dismay of HDP supporters, who had hoped for a peaceful resolution of the Kurdish issue, in disappointment some tended to support the AK Party at the polls."