Don’t judge me, for I am not a Kemalist 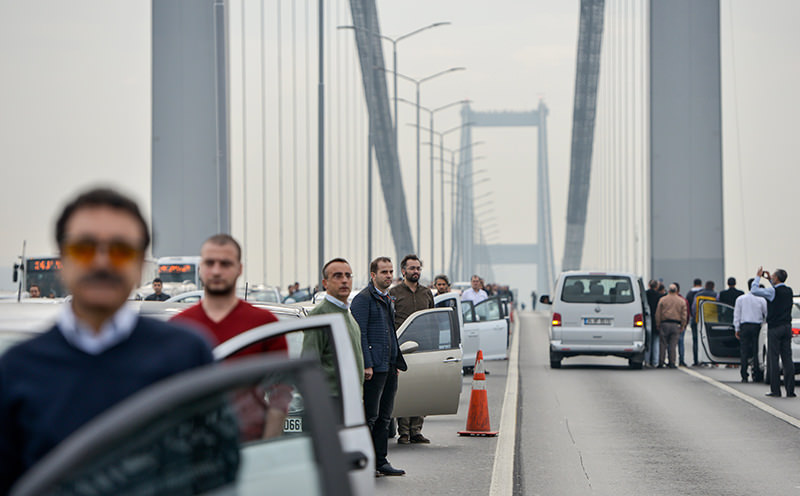 | AA Photo
by Ayşe Şahin
Nov 11, 2015 12:00 am
After a quick breakfast, I hit the road in a rush. I was almost sure that I would be late for work considering the routine Istanbul traffic congestion I whine about every morning. I turn on the radio to wake myself up after a long and sleepless night. My favorite song is playing. Good, I think, at least this is something that might cheer me a little among all my worries.

As I try to comfort myself in a futile attempt that the traffic might ease somewhere ahead, the driver of the car in front of me with a visible sticker of the Turkish flag abruptly jams the brakes and stops the car. If we were not driving with an average speed of 30 km/h, his recklessness would have definitely caused an accident. I become furious but immediately contain my anger. Suddenly, a tall man, probably in his 40s, got out of the car with a wailing siren surrounding us at the same time. I realize at once, it is Nov. 10, the anniversary of the death of Mustafa Kemal Atatürk, the founding father of the Republic of Turkey. It is an annual routine in Turkey to run sirens and stand still for a moment of silence every Nov. 10, at 9:05 a.m. – the exact time of Atatürk's passing away.

I turn off the radio. The driver of the car ahead stands in silent homage. Some other drivers join him. The siren is accompanied by car honks developing into an uproar. And somehow, witnessing that scene flashes to my mind a column published a day after the Nov. 1 election that resulted in the overwhelming victory of the Justice and Development (AK Party). The column written by Yılmaz Özdil, a columnist renowned to be an ultra-leftist Kemalist, read: "... We, for instance, the 25 percent [votes received by the Republican People's Party (CHP)] will unite. Because we know we can depend on no one but each other alone. We will band together tighter than ever before. We will embrace one another more than ever. Switch on the television on Nov. 10, we will be there with none of us missing. It wouldn't matter even if you got 490 percent [of the vote], we will stop the world at 5 past 9."

As I was reading the column, I was extremely vexed at the polarizing language used by the writer, declaring in the vilest way that the rest of the society, a whole 75 percent, did not matter. Quite paradoxically, did such detractors not accuse the ruling party of dividing the society at every chance? Were those who got out of their vehicles to stand for a moment of silence part of that 25 percent?

So where did I fit in this picture as someone who both respected the principles of Atatürk and commemorated his death, but preferred not to take part in the movement of "stopping the world."

Either the siren lasted a lot longer than a minute or it just felt that way. As the drivers got back into their vehicles I came back to the real world from the thoughts I had immersed myself in. At that moment, the driver of the car ahead of me threw me a glance, giving me a disapproving gesture, possibly because he did not see me get out of my car and join him in his pay of respect.

I responded with a faint smile, feeling very deep the sorrow of being part of a society that is becoming extremely intolerant of any ideology, belief, action or culture different to their own. The passionate sensation that took over me during the siren, the moment of silence and all other ceremonial rituals gently deserted me as the bigoted and rigid crowd around me continued to swell. I also felt some of it was an insincere show. I kept thinking how many of those branding themselves as Kemalists are loyal to Atatürk's ideology. How many of his principles are heeded? How close were they to the revered leader who united the entire nation and led the War of Independence? Did he not usher the national struggle in Anatolia counting on the determination and devotion of the people in the region, who are more often than not belittled by the Kemalist elites? "The villagers are the true masters of the nation." Do these words not belong to him?

Something is missing here. There is a chance that Kemalism is perceived incorrectly, both by those who consider themselves as Kemalist and certain religious segments that do not favor Atatürk. Indeed the two mindsets could be feeding on each other and hence continue their existence in reaction to one another.

While I can hardly settle on where to place myself in this spectrum, there is one thing that I am sure about: I am tired of all these compulsions. This society continues, as a melting pot, to stand tall for centuries, with people from different cultural backgrounds, ethnicities and religious faiths living together in peace and brotherhood. Nobody on this land has been privileged as the "main" or ostracized as the "other" – and shouldn't be. Some might not like it, but the AK Party has been the only political party that addressed the problem of "otherization" effectively during the three consecutive terms it served in a bid to invigorate democracy. They came up with a variety of democratization initiatives to dispel the isolation of the "other" – or even worse, assimilation – in a process which they billed as the "normalization of Turkey."

Going back only as far as the 1990s, my childhood years, it is possible to see the progresses made in the name of democratization.

I faintly remember lining up in front of Atatürk's bust at the school's yard. I recall my schoolmates and I spurt out the first line of the oath, which was recited daily before the classes began: "I am a Turk, I am truthful, I am hardworking."

I would only come to realize years after the pressure lying between the lines of these words of the oath – which made me proud each time I recited it. It had never occurred to me back then that those citizens who are part of this nation but are not Turkish might not be happy about being forced to recite it. No previous political party took concrete steps to avert such obligations in society. The requirement obligating students to recite the oath was lifted in 2013. It is hard to believe, but when the issue was first raised, I had to actually stop to think about what was wrong with the oath. So intense were the efforts to create a homogeneous society that I too was blinded by this social order.

Everything seemed normal, and I developed no ability to empathize with those who had been otherized for so long. It has not been as easy to elbow out such divisive requirements. And there used to be dozens of them: Like teaching that Atatürk is next to love after God, before even your family; like assuming that it is a sin to even slightly criticize him; like the price of not idolizing him is being ostracized; while numbering his virtues out loud is acceptable – even praised – saying out loud you are a Kurd, is wrong; and of course, considering the refusal to keep a moment of silence at 9:05 a.m. on Nov. 10 as opposing Atatürk and his principles.

It is hard for me to consider myself as a Kemalist, but I will continue to be grateful to him for the Republic he founded and recall his trailblazing ideas for the rest of my life.

May he rest in peace. I too commemorated him on the 77th anniversary of his death, but in my own way and you can't judge me for that.