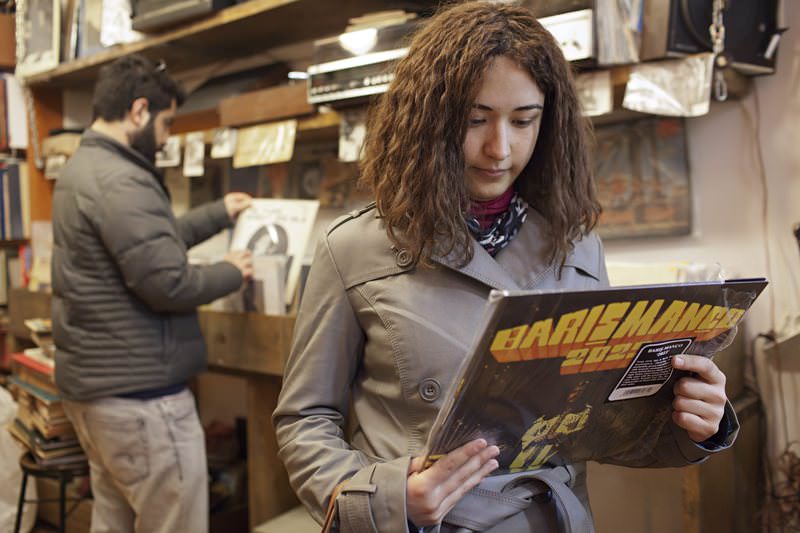 Digital music seems to have made records obsolete, yet several record shops on Istanbul's European and Anatolian sides are havens for collectors

Istanbul, a city that straddles the history and culture between two continents, is a place with a long musical heritage and a vast variety of different musical genres. With load sof secondhand and new vinyl records being sold all over the city on both the Asian and European side, Istanbul is a collectors paradise. Aside from antique stores and flea markets, there are special music shops dedicated just for vinyl records and are organized so well that you can find what you're looking for in no time. Although the digital music revolution signaled the end of all physical formats of music and with vinyl already seen by most as an obsolete thing of the past, few would have predicted the vast revival in vinyl sales that has taken place in recent years. The whole ritual that comes with playing vinyl records: The old smell when pulling out a secondhand record, the tenderness involved when cleaning dust off an LP or the soft crackling sound that greets you as the record begins to play; these simply cannot be replicated through hitting play to your favorite hit on your smartphone or iPod.

Vinyl record shops on the European side of Istanbul:

Owned by Ozan Maral and Tayfun Aras, who are also known as the DJ duo Deform-E, Deform Müzik, located in Cihangir, has a very retro and modern feel to it. With a large selection of secondhand stock, you can find great deals on all kinds of genres including the 1950s and 60s soul and funk as well as Turkish and international rock records. Being one of the best situated record shops in the city, make sure you stop by this record shop when in the Cihangir area.

Formally known as the studio of vinyl enthusiast and DJ, Kaan Duzurat, Analog Kültür is a hidden basement record shop. Analog Kültür offers a wide range of local Turkish music and some killer 45s funk records. While there are more contemporary records than vintage, there is a refreshing variety. Being a cozy place where you can stop by, listen to some good music and find great deals, Analog Kültür is a great place for collectors, especially those who are interested in Turkish records. The boutique record shop also hosts year round events and offers workshops, so be on the lookout.

Opened by Okan Aydın in 2012, Kontra Plak has a nice selection of collectable originals and re-issued European and American music as well as local Turkish music. Away from the concept of just selling records and making money, Kontra Plak is a place where collectors can come together and share their love of music and interest in vinyl records. Catering to the underground crowd while maintaining a balance of well-spun classics, Kontra Plak has a record player where you can explore any album you might want to purchase. Anything from chamber pop to jazz to acid techno and contemporary reggae can be tracked down in this quaint little basement-like shop in Beyoğlu.

Located in the Aslıhan Arcade in Galatasaray, a double-story secondhand book market, Mandala Müzik Evi will be familiar to fans of the Turkish movie, Issız Adam, as the place where the main character, Alper, first meets his love Ada. With Mandala's extensive secondhand collection there is a good chance you will find what you're looking for. Mandala's collection of records, divided equally between 33 and 45 RPM, focuses on 70s music, both Turkish and foreign. If you have an interest in both books and records, you're going to love Aslıhan Arcade and all it has to offer.

Vinyl record shops on the Asian side of Istanbul:

Located in Moda, Vintage Records has a mixture of collectable retro antique records and a lot of vinyl records compacted into the quaint little shop. Whilst the LP's consist of a variety of sounds, the 45s are almost entirely local Turkish music. Although being known for its relatively pricey records, you can find a range from Tom Waits, to Megadeth to Turkish classical singer Muazzez Abacı. Vintage Records is definitely worth the visit due to its vast collection and unique atmosphere.

Rainbow 45 first started as an online shop in 2009 and later opened its doors to customers in 2011. Being one of the most nicely arranged and sorted record stores around the area, Rainbow 45 also attracts customers with its warm and inviting atmosphere. The owner, Salih Karagöz, is a man extremely passionate about music and is eager to discuss records with fellow vinyl collectors. Rainbow 45 offers a wide selection of metal, progressive rock, psychedelic rock, jazz and funk along with Turkish music by local talents who are waiting to be discovered.

Located in the famous Akmar Arcade, a student go-to place for academic textbooks, Zihni Müzik Evi has one of the largest selections of records in the area. With stacks, boxes and drawers filled to the brim with records that are alphabetically organized, searching for records is a breeze. Funk, soul, rock, metal... Whatever you're looking for, you're sure to find in this shop. Although there isn't a record player to test the records before purchase, you can count on the owner, Zihni Şahin, to give you a short review on the record, as he is very friendly and has an interest for vinyl records as well.