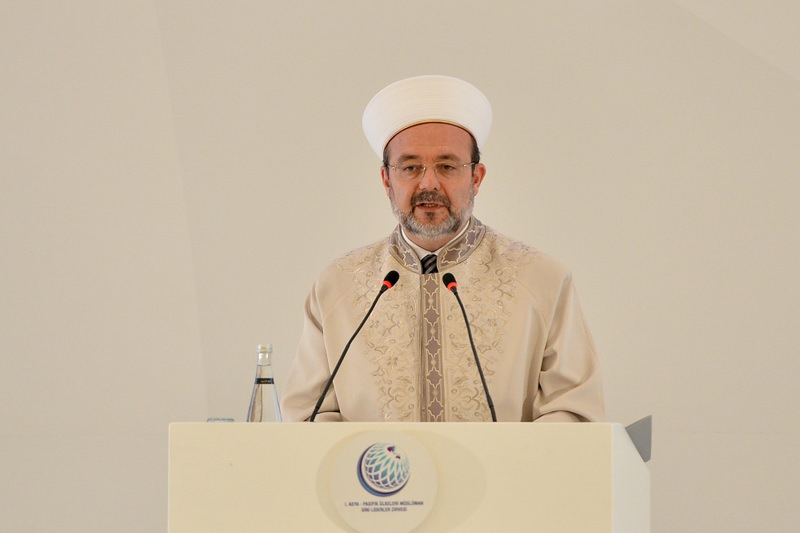 Strongly condemning the terrorist attacks in Paris on Friday and stressing that the chaotic incidents damage the future of peace, Mehmet Görmez, the head of the Presidency of Religious Affairs of Turkey, calls on G20 leaders to deal with the problems at the international level and take decisions for the benefit of humanity

In the name of Allah, the all merciful and the all compassionate,

To the honorable leaders of G20 countries:

Welcome to our country. We are once again shaken with the terrorist attacks in Paris as the pain of the massacre we suffered in Ankara a little over a month ago is still so fresh. It is my belief that no one else can appreciate this pain as much as we can. This attack is not an attack on France, Europe or on the West; it is an attack on every human being who cherishes world peace irrespective of whether they believe in a religion, or if they do believe in a religion, what their faith is. As a person who belongs to a religion that exalts peace as a leading value and as the head of the Presidency of Religious Affairs of Turkey who is in charge of religious services, I would like to say that I am in a state of deep sorrow. Above all, I strongly condemn this attack with deep grief and I share the pain of the French people in particular and the family of humanity in general. Those who carried out this inhuman attack, those who steered them and those who used them as openly as a tool cannot have any respect for Allah, cannot have any feelings of loyalty to a community or be a member of a religion. Humanity has to once again taken up all the paradigms that have convinced terrorist organizations to fulfill their superficial goals though atrocities and terrorism.

These are the lands where humanity has prospered with belief, knowledge, philosophy and wisdom since the times when humankind came to life on this planet. The messages of Almighty Allah that was conveyed to humanity since Prophet Adam have come out from these lands. This is the region, the center of where ancient civilizations and cultures developed.

You are the leaders of the select developed countries that set a course for the world with the values and cultures you represent and the future you seek to chart. The qualifications you possess, the powers you wield, the economies you control and the political issues you steer increase the role you play on the future of each individual and thus, increase your overall responsibility.

Today humanity is faced with a series of interventions and operations that disregard common moral values and the peace initiative we have all cherished. These have surfaced in the past few centuries with the regrettable applications despite all the scientific and technological advancements of today.

We have to admit that we are confronted with a world design that will shake humanity from its very foundations. Exploitation, oppression, superiority, cruel and humiliating perception operations have totally destroyed the ancient rules that were supposed to bring humankind closer to each other.

Arrogance, vanity and oppression that threatens the existence and survival of humanity, greed that has made it legitimate to violate the living space of others and efforts to stall the realization of common ideals has become the common problem of all of us irrespective of which office we hold. Assassinations are being committed continuously in our basin of civilization through internal and external interventions led by terrorism.

The outcome of the chaotic situation that has been structured in a complex manner and is intertwined is destroying our vision of a future of peace and security in a stronger manner with every passing day. It is poisoning life through seduction.

You, honorable leaders of G20 countries, cannot be aloof to the fact that millions of people around the world suffer from hunger and poverty. You cannot be deaf to the regional civil war and tensions that have increased the human toll and has turned the Mediterranean into a graveyard of conscience and mercy. We should not be the only ones who ponder how we ended up with this situation where so-called beatified militants are exploiting religion for extremist purposes.

Those who govern the future of humanity should not forget that they are also the ones who carry humanity to happiness or calamity. In the current situation, people have become more dependent on the world, and the pressures to turn them into monsters of consumption now have no boundaries. Human values have now become words in books and egoism that disregards other human beings has prevailed. Nature, which is our common home, can no longer carry and sustain us.

The world belongs to all of us. We Muslims pray five times a day to the Almighty to steer us on the right path and help us search for the right way and prevail on this course. Our requests as Muslims from the Almighty are shrouded in goodness. As members of a religion that opposes cruelty, which does not veer from the path of justice, that opposes discrimination among human beings on ethnic and cultural lines and members of a religion who do not opt for such means we feel deep concern about the place to which humanity is being demoted.

It is understandable and even praiseworthy that you go to great extremes to carry out your efforts for the supreme interests of your respective countries. However, today the problems faced by humanity do not only interest each of us, but have to be taken up at the international level. We should not be the only ones who are asking the question of which baby will lose his or her life in the crib tomorrow due to the arms race. We believe that with a little bit of effort from you, nations that have been forced to accept hunger as a way of life and poverty as a culture can be salvaged.

As you are aware, my country shelters more than 2 million refugees. The Mediterranean, which you view from your hotel suites, has become a grave for so many refugees. So many bodies of babies have washed ashore along with the conscience and compassion of humanity. I wholeheartedly believe that the bodies of babies that have washed ashore and the remains of those who died at sea while trying to escape bombs will stir your conscience and will turn into one of the leading topics on your busy agenda.

With these feelings I wish Almighty Allah to bring salvation to humanity. I would like to stress that you should use your hearts as well as your minds to help improve the ill fate of humanity in view of your attention and responsibilities.

I pray to Almighty Allah that your gathering in our country creates a new gust in the winds of peace and salvation that have been generated from these lands throughout history and that decisions are taken at this summit for the benefit of humanity. I wish you success in your endeavors.

*Professor Mehmet Görmez, the head of the Presidency of Religious Affairs of Turkey