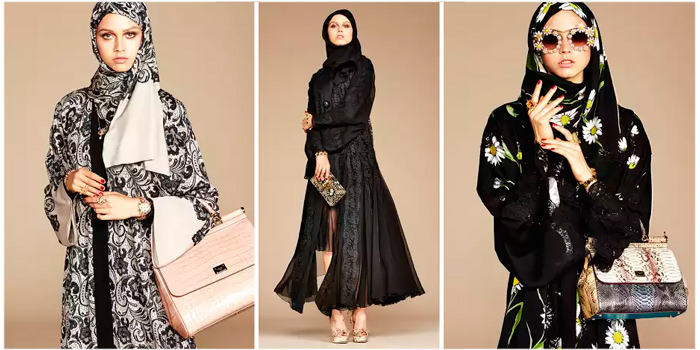 It all began with women sharing "look of the day" posts on their social media accounts. Hijabi women did not take long to join the caravan of fashion bloggers and "outfit of the day posters." One thing led to another and we started seeing major clothing stores in the West begin to display mannequins with shawls wrapped over the head alongside the others.

Although a slow process and sights of this kind were rare until the last few years, such instances gave hijabis, Muslim women wearing the headscarf, a sense of acknowledgement. This is a wonderful feeling in a world where it is always the hijabis who, due to their visibility, generally suffer the consequences of terrorist acts that are so wrongly associated with Islam.

The continued struggles of hijabis to find the "right" items that do not require wearing layer upon layer, altering, pinning, et cetera, was a great opportunity opening the door to the great world of online shopping not to be missed by Middle Eastern and Turkish fashion labels catering specifically for the hijabi consumer.

Now, dominating a key market share in the global fashion scene, Islamic fashion is an incessantly thriving industry within the diverse landscape of Islamic economy. Muslims spent more than the retail spending in Italy and Japan combined in 2014, as reported by Fortune, almost $230 billion, in 2014 – 11 percent of the world fashion market – and it is projected the market will grow a further 6 percent to reach $327 billion by 2020, according to a report by Thomson Reuters. Hence, it is no wonder why leading Italian fashion house Dolce and Gabbana (D&G) would be so keen to break into the still relatively untapped market.

Despite the few "Ramadan Collections" released by other designers like Tommy Hilfiger, Oscar de la Renta, DKNY, among others in the recent years, it wouldn't be wrong to say high-street brand H&M's decision to use a hijabi Muslim to model in its "Close the Loop" campaign resonated the most.

When Stefano Gabbana announced the launch of the "Abaya Collection," the duo's first ever hijab and abaya line, on his Instagram page with the hashtag #dgabaya this week, it caused "oohs" and "ahhs" among Muslim fashionistas worldwide. However, the collection that was unveiled via the style.com/arabia website, consisting of abayas and hijabs in sheer georgette and satin weave charmeuse fabrics, is nothing but mediocre and cannot compare to what the traditional fashion houses currently have on offer.

With distinct D&G signature lace detailing and a sprinkling of the daisies, lemons and red roses that are apparent in the brand's Spring 2016 collection, are outdated in terms of abayas; we've seen them long before.

Information is yet to be released on how much the pieces will cost or what regions they will be available in, but surely those enthusiastic enough to wear a designer label at all costs will be looking at forking out no less than thousands of dollars per item.

Such recognition may at the first instance give women wearing the hijab a sense of pride, but in reality, designer brands are only after making bigger bucks than they already earn. With still a lot to learn from the traditional brands catering to Muslim women, Western fashion labels interested in making a lasting impression and having a long standing position in this market should probably take a much needed trip to the Middle East and see what they are actually up against. Although there is nothing wrong with choosing what is better, the West does not always do it the best. Hence, loyalty is due to those designers who know hijabis best and who have been serving us when there was nobody around to pay attention to our needs or care.

Sorry D&G, not a fan this time.