Make a wish at one of Istanbul's sacred springs 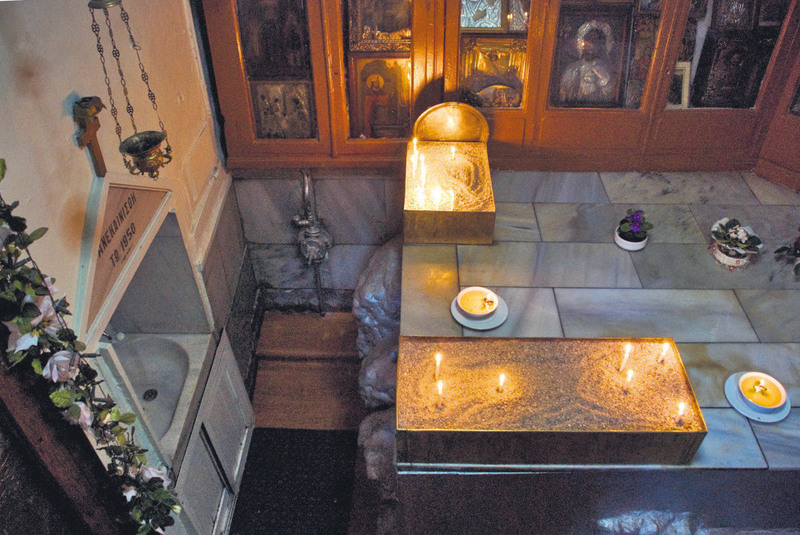 Referring to sacred springs believed to have healing powers and make wishes come true since Byzantine times, ‘ayazmas' are a part of Orthodox Christians' religious culture, and there are churches in Istanbul that were built above or beside them

Istanbul, a city rich in culture, is the only city where one can see a church, synagogue and mosque on the same street. Once the capital city of the Byzantine and Ottoman Empires, it has been home to many civilizations throughout time. And, just like the colorful mosaic tiles found throughout the city, Istanbul is a mosaic of different cultures, religions and civilizations.

Among Istanbul's many religious landmarks, lurking beneath the historical landscape of the city, sacred water springs, or "ayazma" in Turkish, have been flowing for centuries. These sacred springs were enormously important for the Byzantines and Orthodox Christians and remain a symbol of faith.

Throughout history, Christians have visited these holy springs to pray for health, marriage and even pregnancy. It is believed that drinking the water will heal the sick and help prayers to come true.

During the Byzantines era, churches were commonly built over or beside them. Today, many existing ayazmas can still be seen throughout the city, most notably in Armenian and Greek Orthodox churches.

Church of St. Mary of the Spring

Reputed to have healing properties, the Church of St. Mary, known as Balıklı Rum Kilisesi in Turkish, is home to the most important ayazma in Istanbul. The spring, "Zoödochos Pege," meaning "life giving spring" in Greek, has been one of the most important pilgrimage sites for Greek Orthodox Christians for over 1,500 years. Surrounded by Eastern Orthodox and Armenian cemeteries, the ayazma is located in Zeytinburnu's neighborhood of Balıklı and lies a few hundred meters outside the walls of Theodosius, close to the famous Gate of Silivri.

Several stories reveal the history of this legendary healing spring. It is said that Byzantine Emperor Leo I realized the benefits of the holy water when he was a young boy. One day he came across an old blind man who asked him for water. A female voice told him the location of the spring and that if he and the blind man were to wash their faces in the water, the blind man would regain his sight and Leo would eventually become emperor. After completing this task, the man regained his sight, and in the year 457, Leo became the Byzantine emperor. In thanks, Leo had a church built to house the sacred spring.

Inside the church, the water of the spring flows into a marble basin where fish swim. These fish, which are said to have been living in the basin for centuries, gave origin to part of the Turkish name of the complex, "balıklı," which means "a place with fish." According to a later legend, on the day of the conquest of Constantinople in 1453, a monk was frying fish in a pan near the spring when a friend alerted him about the fall of the city to the Ottomans. He then replied that he would only believe the news if the fish he was cooking in the pan jumped out and came back to life. After he said this, the fish jumped in the spring and began swimming.

St. George of the Bells

Visit the Prince's islands to see another important holy spring located at the Monastery and Church of Hagios Georgios Koudounas, more commonly known as St. George of the Bells or Aya Yorgi. This church was built in the name of Saint George and is located on the highest hill of Büyükada, called Yücetepe. The hill is very steep and you can only get there by walking, which takes about 45 minutes. To fulfill their wish-making rituals, crowds of faithful visit here twice a year on April 23 and Sept. 24. This church is one of two sacred pilgrimage sites for Christianity in Turkey. Many people believe a visit and a prayer at this ayazma will grant a wish such as marriage, health and wealth.

Visitors from all over the world visit the sacred spring at the Ayın Biri Church, which translates to "The First Day of the Month." The spring is located in the Fatih district of Istanbul. Here, on the first day of each month, people of many religions visit the site. They then buy small silver and gold keys, which represent their wishes and prayers. If a person's wish comes true, they must return the key to the church. Here, visitors are allowed to bottle the holy water to take home.

The Spring of St. Catherine

Different from other ayazmas, the sacred Spring of St. Catherine is not housed within a church, but rather the basement of a restaurant. The Koço Restaurant in Moda in Kadikoy on the Asian side has been owned and operated by the same Greek family since 1928. According to local legend, some fishermen came across a natural spring near the Moda shore. Exploration of the area revealed the foundations of an old ruined church and an icon of St. Catherine, which led to the ayazma being named for her.
Last Update: Jan 16, 2016 10:10 am
RELATED TOPICS