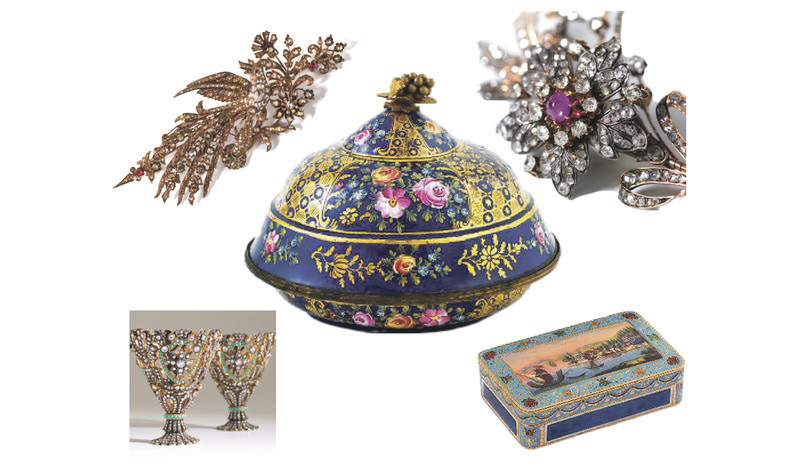 Facing the Bosporus, the Sadberk Hanım Museum in Istanbul's Sarıyer district displays its appealing jewel collection of Ottoman-era accessories and daily items embellished with diamonds, rubies and other precious stones

Glittering gold and silver objects studded with precious gems have always been one of the most eye-catching manifestations of imperial splendor. The portraits of sultanas or queens decorating museums and palaces all around the world reflects their penchant for jewelry set with diamonds, emeralds, rubies and other precious stones. In the Ottoman era, these were a revelation of how exquisitely crafted accessories were a source of flamboyance and power.

English aristocrat and wife to the British ambassador to the Ottoman Empire in the 18th century Lady Mary Wortley Montagu, remembered today for her travel letters, wrote these lines following her dinner with an Ottoman sultana in 1718, "I was very glad to observe a lady that had been distinguished by the favor of an emperor, to whom beauties were every day presented from all parts of the world ... Round her neck she wore three chains which reached to her knees: one of large pearl, at the bottom of which hung a fine colored emerald, as big as a turkey-egg; another, consisting of two hundred emeralds, closely joined together of the most lively green, perfectly matched, every one as large as a half-crown piece, and as thick as three crown pieces; and another of small emeralds, perfectly round." Her words were enough to imagine the extensive use of gems and precious materials in that period.

Jeweled gold, silver, mother-of-pearl or ivory belts were the essential accessories of the Ottoman woman. Chokers and long necklaces were also worn by Ottoman ladies.

Early this month, Sadberk Hanım Museum, a waterfront mansion in Sarıyer, introduced its rich jewel collection from Ottoman times, either used or worn by palace people. The majority dates from the late Ottoman period, but they cover a time span from the 17th century to the 20th century. Some items in the collection were produced in Europe, while others are locally produced. A clear distinction can be seen between the work of court artists and ordinary craftsmen while looking at glimmering pieces.

Among the collection's outstanding items is a bag that used to belong to a palace treasurer in the 19th century. Covered with red velvet, the bag has silver appliqués with an Ottoman Tughra on its surface. It is said that such bags were designed to keep the Harem's jewels.

Snuff boxes are amongst the items visitors must investigate. Most of them were presented to statesmen or emperors as gifts. One of them illustrates Istanbul's landscape, featuring Tophane-i Amire, Kılıç Ali Pasha Mosque and vessels on the sea.

The museum collection then brings a pocket watch made in Switzerland in the early 20th century. Shining with enamel and diamonds, the watch is an example showing that many daily items became luxury pieces at the palace. During the reign of Sultan Abdülhamid, a medal embellished with diamonds and rubies used to be given to women who showed outstanding service.

Probably the most interesting pieces are the cup holders. The palace servants used to serve a cup of coffee in glittering holders. By doing so, a sultan's hands would not get burnt. Visitors also came up with hand-held fans made of peacock and ostrich feathers. Known as "titrek" and "zenberekli," Ottoman pins are also among the collection pieces.

Aside from the surviving jeweled objects themselves, archive documents, the writings of Ottoman authors and foreign travelers, contemporary paintings and miniatures demonstrate precious metals and gems adorning items ranging from book bindings to costumes in Ottoman culture. Celebrating the 35th anniversary of Sadberk Hanım Museum, the collection will remain on display until May 31.
RELATED TOPICS