Ada Kaleh: A Turkish island in the Danube River 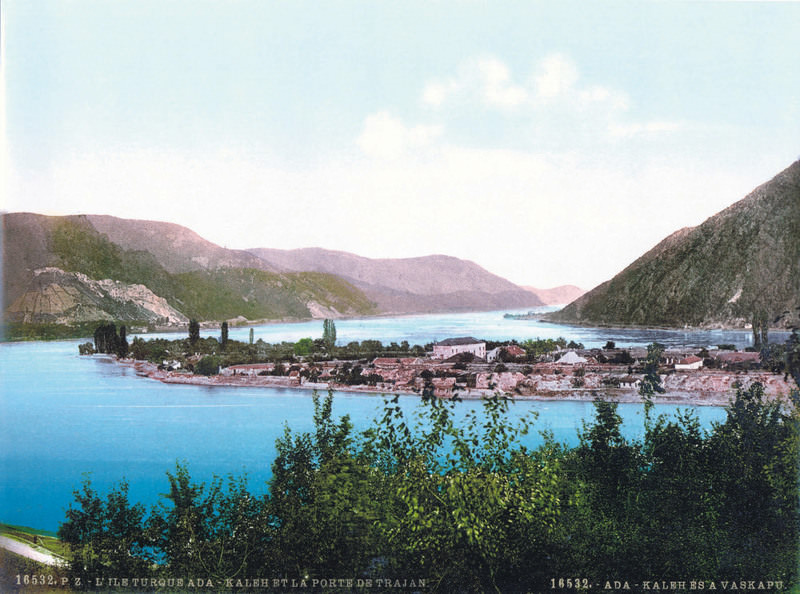 Facing the port city of Orsova in southwestern Romania, Ada Kaleh was an island, whose previous population was entirely Turkish. Conquered by the Ottoman Sultan Mehmed I, the island was under Romanian rule after the World War I. The island was submerged with the construction of a dam in the early 1970s and the residents either moved to Turkey or Balkan cities

In my childhood, a book and a red ribbon were presented as a gift to the first three children who learned reading at primary school. I was given a book titled "Adakale Türk Masalları" (Ada Kaleh: Turkish Tales). I still remember the colorful landscape on the book's cover.

In the Danube River, Ada Kaleh (Island Fortress) was an island facing the city of Orsova, between Romania and Serbia. The island had a width of 400 meters and was 1.8 kilometers long. The Danube River flows along the Wallachia lowland, carving a route through the Carpathian Mountains. The river then enters the Iron Gate by nudging down, and this is where Ada Kaleh was located.

The island was 300 meters away from Romania and 400 meters from Serbia. It was conquered by Ottoman Sultan Mehmed I in the 15th century. A castle was established to avoid attacks by Austria and Turks were settled there. The Ottomans used to call it "the lock to Hungary and the key to Serbia and Romania." Upon the Treaty of San Stefano, concluded after the 1877 Russo-Turkish War, the defeated Ottomans were forced to empty the castle. To soften the treaty's harsh provisions, the Treaty of Berlin was signed in 1878 with the help of Britain, but the island's status was entirely forgotten. The Ottoman Empire officially continued to rule Ada Kaleh and a borough head and a "qadi" (an Islamic judge) were based there.

Tevfik Bey, a governor at the time of Sultan Abdülhamid II, reported the following: "We paid a visit to Ada Kaleh in 1902 while returning from Vienna. We wanted to see the island, an Ottoman region stuck between Hungary, Serbia and Romania, and how its people are doing. We reached the island on a boat from Orsova. Hungarian soldiers were on guard in a castle with a big gate situated not much further from the dock. It is clear that the island's entrance was under Hungarian control. There were no Hungarian soldiers upon entering the castle. We felt as if we were in Istanbul when walking along the streets that composed a small neighborhood. We saw wooden houses and women with headscarves. An island local accompanying us gave a warning by saying: 'There were some ladies near the gardens, do not look at them.'

"A modest building was standing on a street. An Ottoman flag hung on its door and two soldiers were on guard in front of it. This is the government office where official staff are based. We sat in a coffeehouse and had a chat with locals. The only difference from our coffeehouses is that the locals could speak some German. A confectionary shop with 'akide' candy and soft, white hard candy behind its front glass caught our eyes. We took a cornet of candies immediately. We then returned from the same road and exited the castle. We took a boat to cross the coast yet found Hungarian customs officers standing in front of us. They asked a big amount of customs tax for our candies. We put the cornets in their hands and managed to escape from them."

Ada Kaleh was given to Romania with the Treaty of Trianon, after World War I, but the Ottoman Empire, although was not among the treaty signatories, did not recognize the agreement. Rather, the government gave up Ada Kaleh with the 1923 Treaty of Lausanne. It was the last territory the Ottomans lost in Europe.

Falling under Romanian rule, the island had 150 households with 750 residents in 1967. Ada Kaleh was the only city with an entirely Turkish population in the region. Keeping Ottoman traditions alive for 500 years, the island locals engaged in tobacco farming, Turkish delight business, boating and serving coffee on excursion ships along the Danube River. The island's architecture was also charming, with white masonry houses with tile roofs and a single-minaret mosque.

Ada Kaleh was also a tourist attraction. Tourists were asked to pay 1 Romanian leu to enter. Its Turkish delights and confectionary were famous. The locals used to grind coffee with a mortar and pestle and brew it in hot sand or ash from where the smell of the coffee wafted right across the coast. It was said the coffee got its taste from the water of the Danube. Meals too were cooked with the river water. The Danube River was believed to have healing affects and it is also said that its water does not cause wrinkles on the face and that women who wash their face with it do not age. Indeed, rivers flowing in Eastern Europe are known to be fertile.

There was one textile, one sausage and two tobacco firms on the island. Thirty-seven different cigarette brands and even cigars were produced. Illegal Romanian workers used to work there and the underclothes of inmates were made there. Ada Kaleh was an asylum island. Romanians who wanted to escape to Yugoslavia, which had a relatively moderate political regime at the time of the Cold War, came to the island to try to reach the Yugoslavian coast. Many people were killed every day attempting to escape to Ada Kaleh. The Danube River flowed red at times as a result. To avoid this, the government surrounded the island with wire fences, but it meant the locals began to feel as if they were living in an open-air prison. Although they knew how to swim well, no one thought of leaving the island.

In 1967, the Romanian and Yugoslavian governments lead respectively by the two communist leaders Nicolae Ceausescu and Josip Broz Tito, attempted to destroy the last Ottoman land on the Danube River. The island was to be submerged with the construction of a dam. Right after the dam project was announced in 1962, locals flocked to the castle and protested the decision. They signed a petition addressing Ceausescu that read: "We will not leave our island. If we leave, we will go to Turkey." However, they did not send the petition for fear that Ceausescu would throw them into the river and they would be food for the fish. Nevertheless, they secretly sent the petition to the Turkish Embassy. In line with its policy at the time, Turkey was apathetic. Thirty-six households moved to Constanza, two moved to Timisoara and 12 to Budapest. The remaining moved to Turkey. Upon completion in 1972, the Iron Gate on the Danube submerged the island. This is why my heart sinks whenever I hear about Ada Kaleh.

Before the rising waters flooded Ada Kaleh, some of the structures built on the island were relocated to the nearby Şimian Island, including a part of the masonry fortress' catacombs, the mosque, the bazaar, Mahmut Pasha's house, the graveyard and various other objects. However, planned reconstruction of a new Ada Kaleh was never completed.
Last Update: Jan 22, 2016 1:13 am